At the risk of revealing too much material from the proposed print title of collected essays, balanced against the desire to have some fresh content to keep my audience warm while I look after things in the real world, I've decided to publish here, for the first time a brand new essay I wrote for inclusion to the print version.  I'm still not on board with any publisher so far, and I hope to get back into more frequent and regular posts (I've been promising to write about chaplains in WWI for some time now, but haven't gotten down to it.)

What follows is a brief understanding of one of the most difficult to understand aspect of the War, the idea of Shell Shock.

The title of this essay is, without a doubt, an offensive phrase.  In its modern meaning, it is applied to someone who appears frazzled or mentally unstable; incapable of proper action due to emotional stress.  The phrase itself is supposedly linked to the First World War due to arts and crafts therapy undertaken by patients who had been diagnosed with nervous conditions.  These men were given simple, repetitive tasks such as basket weaving in the hope it would distract them from the strange and misunderstood symptoms of their condition. 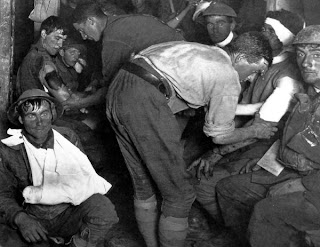 It was commonly referred to at the time as “Shell Shock”, which in itself comes from a medical misunderstanding of its cause.  As much as physiological medicine of the age may appear ignorant or backward to us today, psychiatric medicine was much further behind, as it still is.  Mental illness is difficult to diagnose and even now there exists very few fully effective treatments for psychological disorders, and the general stigma of public feeling towards the mentally ill; as objects of pity, fear or weakness still surrounds our understanding of these ailments.  Such attitudes only harms the sufferer further, even to the point of suffering in silence rather than to seek treatment lest they be thought of poorly.
The medical misunderstanding at the time was that close proximity to concussive force of explosions somehow jarred and disordered the brain.  The term was intended quite literally and was applied in a generic sense to a variety of mental illness.
The mildest cases could almost go unrecognised, usually noticed in a slight change of demeanour or a depressive or melancholy state; to more obvious signs such as complete despondency, mania, loss of sensibility or relation to surroundings, shaking or twitching, making nonsensical sounds or animalistic screaming.  In extreme cases this produced “hysterical conversion syndromes in which a mental condition had physical symptoms like paralysed limbs, blindness or deafness.” (Holmes, 484)

By December 1914 the British had noted that 3-4 per cent of enlisted personnel and as many as 10 per cent of officers were displaying neurological symptoms. (Meyer 393)  Much misunderstood by military commanders and army physicians as cowardice or malingering, sufferers were often punished by military law.  This included several cases of execution by firing squad for cowardice even in the face of medical evidence supporting the existence of a nervous condition.  This was the standard practice rather than properly diagnosing, as much as was possible with medical knowledge at the time, and if not even diagnosed, no type of treatment, effective or otherwise could be applied.

It wasn’t until the mid –point of the war that a better understanding began to take hold:  “Charles Myers, a young English psychiatrist, decided... shell shock was a ‘singularly ill-chosen term’....It rose out of the particular conditions of trench warfare, an experience beyond anything the human psyche was built to endure.” (Meyer 396)

It was found that quick removal from the combat area and treatment behind the lines was most effective, not of curing the condition necessarily but enough to return the patient to active duty.  This may sound harsh, and does need to be tempered with contemporary understandings of such conditions partnered with the military necessity of returning all recuperated wounded, physical or psychological, whenever practicable, back to the line.  Conversely the treatments could be just as terrible as the disease- extremes we wouldn’t think of today such as applying electric shocks or submerging in ice water were just as common as gentle recuperation. 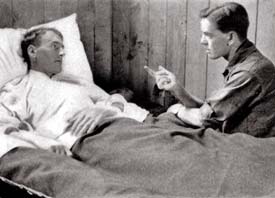 of shell shock were officially labelled).  This amounted to 6 % of all pensions, with some nine thousand still in hospital, some never to be released.  It was estimated from a small sample study that about 39% of cases ever returned to some kind of normalcy. (Ferguson, 341)

We know better today that cases of psychological stress were not solely a First World War phenomenon.  An official report of American forces in the North West European Theatre of World War II stated that all men were susceptible to such breakdowns, and an average individual would begin to lose effectiveness after ninety days in the combat area (Ambrose, 203)

Even then, during the Second World War, there were still those unconvinced that such illnesses were legitimate.  The incidences of the American General George S Patton Jr. striking private soldiers who had been admitted to hospital for nervous disorders are among the most well known examples.

Today, we give the term “Post Traumatic Stress Disorder” to such illnesses, and even understand that they can occur in all cases of mental trauma and are not specific to the military or combat.  However, modern medicine still has no comprehensive treatment of PTSD; and as long as the fear and stigma of mental illness persist, some who might benefit from treatment will remain undiagnosed from the shame, and those who admit their condition to seek help can still be handled in a marginalised way.

Posted by Christopher J Harvie at 14:43