In the Event of My Death

The Life of an Ordinary Man

“In the event of my death, I give the whole of my property and affects (sic) to my mother, Mrs. William Fowler”[1]
-Excerpt from the Military Will of Cpl H Fowler, dated 9 June 1916 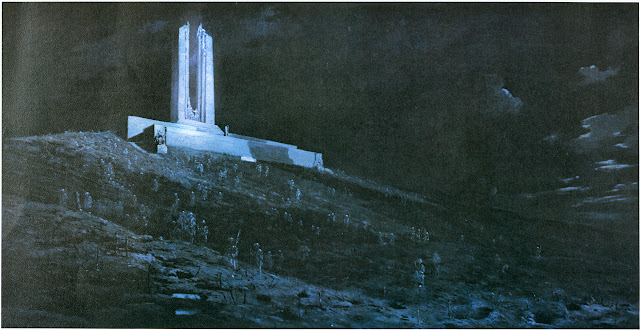 I am often thanked, quite graciously, when I can provide some input to a question of history.  My response to that gratitude is an equally sincere, and most literal use pf the phrase “my pleasure.”  What I get to do in this, from time to time, is not only help find the answer sought, which is gratifying in itself, but I get to meet, in a sense, the ordinary people who have made our history; those who have witnessed poignant moments of the past and some, like Corporal Harry Fowler, 44th Battalion, CEF, who contributed everything they had to the event.

A young woman, involved in Canada’s cadet program (a youth program of citizenship and leadership based upon the three branches, RCN, Canadian Army and RCAF of our Armed Forces) had taken on a research project investigating a soldier from her home province of Newfoundland who had served, and died in the First World War.  Some questions on clarification had been passed along and appeared on a social network page I follow on my news feed.  I was only too happy to provide an answer, and in doing so came to know about a life I may otherwise have not.  Circumstance of history and the way in which Library and Archives Canada (LAC) are pursuing their work helped a great deal.  Cpl Fowler, though from Newfoundland joined the Canadian Army from where he was at the time, Winnipeg, Manitoba.  Had he joined in Newfoundland, it would have been harder to get his records.  As Newfoundland and Labrador didn’t Confederate with Canada until 1949, military records for the province for both World Wars are not in the National Archive.  Also, as LAC is diligently preserving all WWI service records digitally and are working alphabetically, it’s fortunate the subject had a surname closer to the top end.

Why Harry Fowler, a labourer from Brigus, Conception Bay, Newfoundland was in Winnipeg can only be guessed at a century on, but it is most likely he went to the mainland to find work.  Before the war, both Canada and Newfoundland had been in recession and going afield to find decent paid work for the unskilled was a common occurrence.  We also cannot guess at his motives for joining the army- the reasons could range from patriotism to the promise of regular pay or a mixture of many things.  Whichever they may have been, on the 4th of June 1915, he was attested to the 61st Battalion for overseas service.[2]

The 61st trained in Canada for nearly a year, sailing for Great Britain aboard the SS Olympic on the 21st of April, 1916.  The Battalion’s embarkation, it seems, was delayed so that their hockey team could compete for the 1916 Allan Cup, which they won after defeating all opposition.[3] 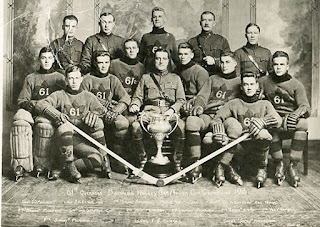 The article posted to MyWestman.ca regarding the 61st’s hockey triumph, also tells us the fate of the Battalion when it arrived in Britain: “Once there the unit was broken up and the soldiers in the battalion redistributed to Canadian army units in France as replacements. This was a common occurrence and many battalions raised on the Prairies and the rest of Canada were broken up once they arrived in Britain and the soldiers sent on to other units. While the breaking up of units was hard on the morale as soldiers suddenly lost the companionship of men they had trained with and perhaps enlisted with, the leadership felt it was better that veteran units were kept up to strength as these units had actual experience on the battlefield and could better pass on this experience to new re-enforcements.”[4] 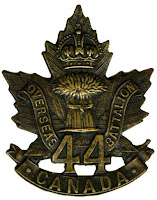 Harry Fowler was transferred to the 44th Battalion which subsequently departed for France as part of the 4th Canadian Division in August of 1916.  The 4th Division’s arrival completed the Order of Battle of the Canadian Corps, though it would be several months before all four of the Corps’ divisions were assembled together.  Before that point, these new units arriving went through work-up training in the field under the supervision of more veteran units, and took part in the closing phases of the Battle of the Somme.  During this period, Fowler was twice wounded. On the 23rd Oct 1916 “Four Other Ranks were wounded on carrying party of last night.”[5] Fowler was one of the four wounded, receiving a “GSW” to his right cheek.[6]  GSW stands for “Gun Shot Wound”, but does not necessarily mean he took a bullet to the face.  GSW is a medical catch-all for any wound caused by fragments, whether they be rifle bullets, shell splinters or shrapnel.  As his records indicate he was in hospital for only one day, it can be reasonably assumed that the wound was superficial and none too serious.  The wound happened whilst he was, with others from his unit, carrying rations from a supply dump to the front line.

20 Nov 1916 “Enemy’s artillery active during relief.  Casualties 2 OR[Other Ranks] killed and 4 OR wounded.”[7]  This matches Fowler’s record of going into hospital on 21 November after being “Buried by Shell.”[8]  This happened when the 44th Bn was being relieved at the front line by the 73rd Bn.  Reliefs such as these were part of a regular series of rotations.  “Once in the line, the rotation of trench duties followed a set pattern.  The usual routine for infantrymen in France was as follows: three weeks or a month moving between the front, support and reserve lines, passing five or six days in each...then followed perhaps ten days at a rest camp eight or ten miles back, or occasionally a still longer period twenty to thirty miles to the rear.”[9]  Such movements were bound to attract enemy attention, and an increase in artillery during a relief was a fairly expected event.

Neither wound seems to have been serious as he returned to duty rather quickly, and no treatment records are part of his file.

In January of 1916, Fowler was selected for an NCO’s course, the need for junior leaders for upcoming operations was an integral part of the planning of this offensive.  He was promoted to Corporal on the 21st of January. 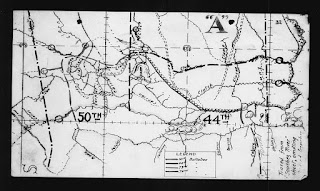 The operation being prepared for was the Canadian Corps’ attack on Vimy Ridge, part of the opening moves of the Battle of Arras, April 1917.  4th Canadian Division formed “the left flank of the Canadian Corps Operation (with) the 11th and 12th Canadian Infantry Brigades attacking HILL 145, with the 10th Canadian Infantry Brigade in support.”[10]  As part of the 10th Brigade, the 44th Battalion would not be going into action on the first day.  Two battalions, the 44th and the 50th were scheduled to advance the following day, to capture a feature known as “the Pimple” meaning to have it in possession and consolidated against counterattack by midnight, 10th April.

It was that “on the left, the 4th Division had some of the toughest objectives….(the Division) faced Hill 145, the highest point of the ridge and the best defended.”[11] The highest feature of a high feature, Hill 145 “was the lynch pin on the German defence.  It had to fall.”[12]  By late evening on the 9th, after a daring assault by the 85th(Nova Scotia Highlanders) Battalion, most of this high ground was won, “except for the upper summit…and parts of the eastern slope…the 44th and 50th Battalions sere sent in.”[13]

Lt Colonel Reginald Danbury Davies, the commanding officer of the 44th, a man of exceptional courage (he was awarded three Distinguished Service Orders and was five times Mentioned in Despatches for his service in France),[14] wrote that “at 6 PM on the 9th orders were received cancelling the attack on the PIMPLE area. The Battalion (took position) behind the Battalions of the 11th Canadian Infantry Brigade, whose attack had been held up in the neighbourhood of HILL 145.”[15] Colonel Davies continues, “At 11 AM April 10th, I received orders to capture and consolidate, as an outpost line, the eastern edge of VIMY RIDGE lying beyond Hill 145.”[16]  ‘C’ and ‘D’ Companies of the 44th were the battalion’s assaulting units, moving towards their objectives at 3:15 that afternoon.  This meant that the Battalion would be going into action at short notice against an objective they had not specifically trained for.  The months preceding the battle, and part of the tremendous success of the ridge’s capture, were spent in the meticulous planning, training and rehearsing for the very specific jobs each unit would be expected to undertake in the battle.

It is quite remarkable, and in fact a testament to the high level of proficiency in that preparatory training of the Canadians that the 44th Battalion went into the attack after having moved from the positions they had taken up for the now cancelled attack on the Pimple to this new, supporting assault and moved forward behind a covering barrage mere hours after receiving their updated orders. ‘C’ and ‘D’ Companies had reached their objectives and made contact with each other within the hour, despite “’D’ Company had some difficulty in clearing the wood.  Mopping up parties moved through to farther edge capturing a good number of prisoners.  Very heavy casualties were inflicted on parties of enemy who attempted to escape through the wood.”[17]  It was later found that the 44th had attacked an enemy force which outnumbered them two to one.

The Battalion’s casualties in this operation were reported as one officer and fourteen OR’s killed, four officers and seventy-one OR’s wounded, ten OR’s missing.[18]

Cpl Fowler was among the dead. We may not know what he did on that day, or how he met his death, but he was among men who accomplished a great feat that day, and so he counts as he should for his part in that accomplishment.  He has no known grave and is thus listed by name on the Vimy Memorial with 11 000 other members of the Canadian Army whose bodies were not recovered or whose remains were not identified, becoming, like so many others of this war “Known Unto God.”  Whatever personal effects Cpl Fowler had in his barracks kit- those items not taken into battle- would have, in accordance with the will he wrote just ten months prior, been sent to his mother in Conception Bay, Newfoundland.