There Will Be No Football 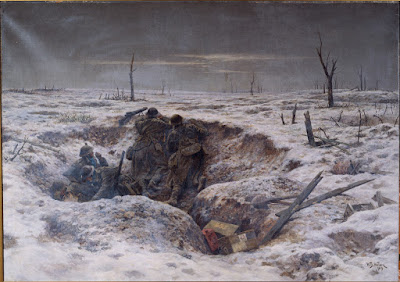 “The following from Canadian Corps:- ‘The Corps Commander wishes to congratulate Commanding Officer and all other ranks of 25th Battalion on their very successful raid last night.’”

The group of one hundred men moving, cautiously deliberate across the waste of No-man’s Land not quite three hours into Christmas Day 1916 were certainly not part of any goodwill tour.  “Friendly international football matches were now so much as reaching mythical.  Having happened, two years ago, time had gone to see the final exit of many who shook hands in the ’14 truce as to push it into being beyond living memory.”[1]

In command of this raid was Captain William Archibald Cameron, who seemed keen to the enterprise.  “Bill Cameron was aching to get a go at him (the enemy),” Lieutenant R. Lewis would later write in his informal history of the 25th (Nova Scotia Rifles) Battalion, “so he picked 80 men (Lewis has this wrong, it was 100) and four officers….The time appointed was Xmas morning.”[2] 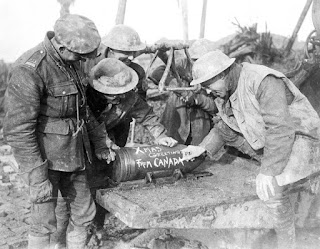 With artillery instructed to lay down a “box barrage”- a shellfire enclosure of the immediate area- captain Cameron’s men, divided into four groups were to enter the German Front Line across a 350 yard frontage.  Their mandate was typical: “To destroy or capture all Machine Guns and documents possible, and to kill or capture all occupants of the trench.”[3]

The Canadians were going to be here in this area for the foreseeable future.  It was, then, of critical importance to upcoming operations to know precisely who was occupying the line opposite; and what their potential fighting quality was.  Only a few days prior, along 1st Canadian Division’s front, a chance encounter between opposing patrols with the 15th (48th Highlander) Battalion and the Germans had netted a single prisoner.  The man taken “was head of patrol and lost his sense of direction and was rounded up by our chaps.” His unit’s morale was assessed as “very, very good,” and he is recorded as having heard rumours “that the Kaiser has offered peace because neither side can break through and there’s little use going on with useless slaughter.”[4] Perhaps the only real complaint this Soldat had was about the food he and his comrades had in the trenches.  Though, being dissatisfied with rations is hardly out of the ordinary for any soldier, in any army, past or present. 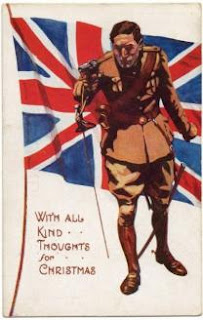 Cameron had Bangalore torpedoes at the disposal of his entry teams to clear the wire.  Christmas Eve day had been overcast, with showers[5]but this had cleared overnight and the raiding party was faced with the full brightness of a new moon.  “When they went to put the torpedoes underneath the wire,” Lt. Lewis continues, “they found it impossible as it was too bright.”[6]  Captain Cameron consulted with his officers and the decision was reached to storm the wire at the same moment the box barrage commenced.  When it did, “the four parties simultaneously charged the enemy trenches.  Little difficulty was experienced in getting through the wire except by the right centre party, who managed to force their way through a quantity of loose and tangled wire.”[7]

It was all over very quickly.  The parties on the right entered trenches in poor condition, and unoccupied.  On the left, “the trenches were much better, revetted and boarded.  Seven prisoners were taken here and brought back to our lines.”[8]  In all, Captain Cameron’s men spent five minutes in the German trenches, rounding up prisoners and bombing any dugouts they found; “they were able to completely clear the objective of the enemy.  Half an hour after zero hour, everything was normal again.”  A great part of the raid’s success was due to the efficiency and precision of the artillery’s barrage.  The shelling worked perfectly in isolating the raid’s target area.  German retaliation to the barrage was weak- with some medium calibre counter fire, trench mortars, rifle grenades and machine guns.  None of this was effective and mostly short-lived.  “Both Rifle Grenades and Machine Guns ceased firing a few minutes after the operation started, being apparently put out of action by our artillery fire.”[9] 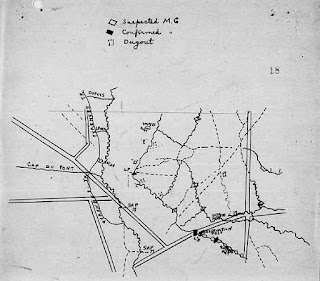 Estimates calculated the raid had caused the enemy twenty casualties, aside from the prisoners taken; for a return of seven raiders slightly wounded and one, Sergeant G.B. Ingham, killed.  George Ingham leaves a lot unanswered in his death.  Specifically that up to the 12th of November, around the time of his promotion to Sergeant, he had been serving under an assumed name.  Stranger still is that he had at first enlisted under his legal name, George Bernard Ingham and subsequently enlisted again under the false name of Nelson Page.  The Ingham’s are a family of minor prominence in upstate New York; Sgt. Ingham’s father would become mayor of Briarcliff Manor in the late 1930’s.  There also exists a bizarre literary connection as a writer named John Hall Ingham and another named Nelson Page- Sgt. Ingham’s alias- were contemporaries in American literature in the late 19th Century.  I have not been able to deduce the reasons for Sergeant Ingham’s subterfuge beyond speculation, but I hope to uncover the mystery.

Despite the losses, the raid was a triumph.  Taking seven prisoners and making detailed observations on the condition and equipping of German trenches elicited praise from both the General Officers Commanding the Canadian Corps and First Army, to which the Corps was attached.  Captain Cameron would be awarded the Military Cross “For conspicuous gallantry in action.  He led a raid against the enemy with marked gallantry, inflicting many casualties and capturing seven prisoners.”[10]

For those on the front during the second Christmas of the war, it was just another day of business as usual.

Want to help make Christmas “merry and bright” for an aspiring writer?  You could do worse, I imagine, than to order a copy of my novel, set in the Canadian trenches at Vimy Ridge.
“Killing is a Sin” is available through Amazon and by request through book retailers world wide. 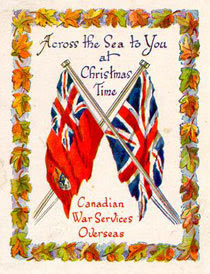 Merry Christmas to you all, and all the best for the New Year.
Regular Posts of “If Ye Break Faith” will resume January 2 2017