I have decided, as this project grows, ever so slightly, to adjust the format of my blog once again.  Still posting on Mondays and Thursdays, I will give a brief project update in the opening paragraph each day, but will follow on both days with my subject essays.  I find the writing of them much more enjoyable than what has become a bald appeal for financial means , and I do hope they are that much more enjoyable to read.

When I say the project is growing slowly, I couldn't think of a more apropos way of describing my progress.  Many of you are aware that my ability to continue research towards the project's mandate has been suspended, but I've had a good amount of feedback pointing me towards usable links and resources (with thanks to Reddit user PHDepressed).  Not only that but I've picked up a solitary follower on this blog, s it feels as though I am writing directly to a single reader which is a nice way to think about it, and my Facebook and Twitter posts have been receiving positive feedback.  As always, support for the project moral or otherwise can be made through  the PayPal "Donate" button below, at IndieGoGo, by joining the Facebook Page,  by following the twitter feed or this blog itself.  Comments and questions can be directed here.


One of the questions that is often asked by those with little study in World War One is why did the war on the Western Front stagnate into that of nearly four years of entrenchment?  The quick reply is that the technology brought forth by this new industrial emergence of war had the main opponents equally matched in that regard, being led by fussy old generals who had no idea how to cope.  Like most quick replies, though, there is very little actual understanding of the entire situation.  There is a little truth to it, but not nearly enough to provide a comprehensive answer.


It becomes much more clear when it is understood as to why armies adopt a defensive stance in the first place.  The primary reasoning for this is that they do so because they lack the ability to continue offensive action.  Denying one's enemy important territory or hoping to force his attacks in a particular direction are definite benefits to being on the defensive to  be certain, but not reason enough to stall or cease an advance. 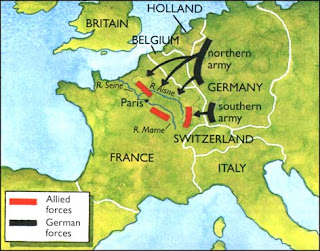 With that reasoning in mind, we go back to the initial question, that being why in the case of the Great War did the opposing forces both take up defensive postures at much the same time in the Autumn of 1914 and remain so (more or less) until November 1918?  By September 1914 Germany had overextended its lines of communication.  the German plan at the outset of the war was to advance rapidly through Belgium and France before the latter could be adequately prepared so as to gain a quick victory in the west whereby they then could concentrate on Russia in the east.  This, known as the Schleiffen Plan after the German chief of staff who developed it, relied on a strict adherence to timetables in order for it to capture Paris within six weeks.   Ergo when the German army encountered harder resistance than anticipated, the scheduling of the plan was, in a sense derailed and necessitated a defensive posture to shore up their forces before resuming the advance.


In the case of the Allies, the rapidity by which they countered the initial German advance had greatly depleted their initial strength and they required time to reinforce against those losses.  In Britain's case this was very pertinent as they were possessed of a small professional force and were in the process of raising armies from scratch (which was to include the arrival of the Canadian Contingent).


Both sides attempted to turn the other's flank in what became known as "The Race to the Sea", but both lacked the means to make a decisive thrust, which then only extended the defensive lines until they ran from the North Sea to the Swiss border.  Of course, the misconception of one long line of dug earth between these two points is a fallacy.  Trenches can only be dug where ground is suitable.  Land features, natural obstacles and built up areas not able to be entrenched were otherwise defended.


Taken that reason into account, why then did the war fall into stalemate for the following three years?  that question answered plus the Canadian perspective on the trench war in Thursday's update, so stand to for that!
Posted by Christopher J Harvie at 05:00