Those who visit this page regularly are aware that it’s very rare to make use of this space for the purposes of editorialising.  The focus of “If Ye Break Faith” has been educational- with a mind to bring a deeper understanding of the First World War to a broad audience in an engaging and appealing fashion.  Within that educational purpose is a desire to help make comprehensive why such a high value is placed upon our remembrance of the war, and from that what is intrinsically owed by society to those who have dedicated a part of their life-or the rest of their lives-to out collective security.  With that in mind, it has become imperative to draw attention to an issue, lately becoming fractious, concerning our veteran’s community and which has surprisingly familiar roots in the outcome of the Great War.  Your input in this issue is welcome, and can be made through our Facebook Page and Twitter Feed.

Nearly one hundred years ago, as the Armistice went into effect, a question for a great number of service personnel was “what happens now?”  The current government had been installed on a popular platform which had included a broad assertion to answer those concerns, “in the 1917 election, soldiers had been promised ‘full re-establishment.’”[1]

Soldiers had been away from home, some for years, and had been separated from the changes which had 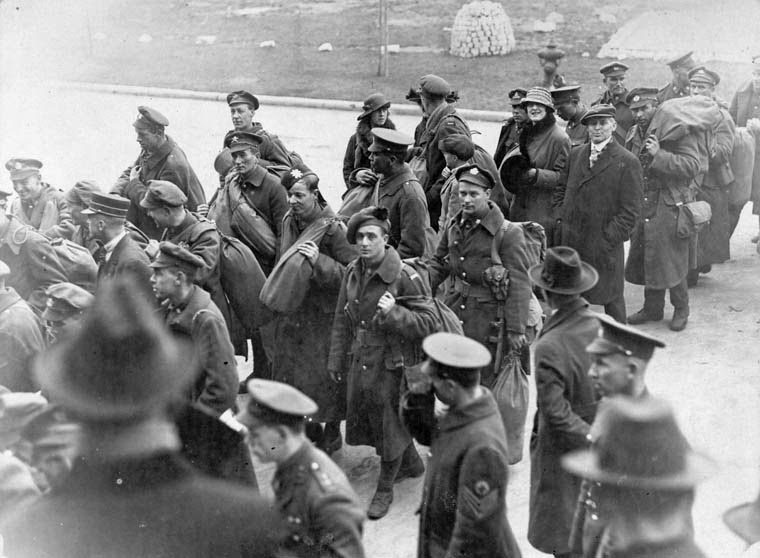 occurred at home.  Those who had left jobs to join the war, including professionals such as doctors and lawyers couldn’t be assured those jobs remained vacant.  Some had known no other employment but the military, or had suspended academic pursuits to answer the call.  As war economies wound down, opportunities for returning soldiers would become fewer and placed them in competition for jobs with those who had more recent experience in the private sector.  “Few ex-soldiers escaped a sense of grievance.  It was too easy to see that those who stayed at home had done better.”[2]

Their needs went beyond basic considerations of work and education.  Many required ongoing medical care, rehabilitation and retraining for disabilities caused by wounds.  Untold numbers suffered emotionally from the extremes they had been subject to.  In an age where stoicism was a highly valued trait for a man, and coming from a military environment which discouraged redress of needs not met, many of these men would just cope as best they could on their own.  As such, “the veterans had some influence in shaping the post-war Canada that they believed was owed to them for their wartime sacrifices, and a number of them went into politics at the national and provincial level, they never became a powerful, cohesive force in Canadian society.”[3] Not a sense of overt entitlement, the veterans only desired to receive what had been a motive for them to vote for the current government in the ’17 elections; “the war did not radicalise veterans; it gave them a special stake in the nation they had defended.”[4]

“By the end of World War 1, there were a total of 15 Veterans groups and a number of regimental associations representing former service members in Canada. Despite their common goal – to help returned servicemen in need – their efforts were fragmented and largely unsuccessful.”[5]  There could have been no clarity of purpose with so many groups intending to represent a single demographic.  A vocal and insistent demand that all who had served Canada in the war bee given a pay out of $2000 each (the equivalent of nearly $30k in today’s value) -well beyond the Government’s ability to provide- undermined the credibility of these disparate groups.  The Canadian Legion of the British Empire Service League formed in 1925 to amalgamate veterans’ groups, giving a singularity and solidarity to the purpose of lobbying for veterans’ needs.  General Sir Arthur Currie, who had commanded the Canadian Corps, wrote in 1925 “all the splintered veterans’ groups did was keep up the old shouting that the country owes a living to every returned soldier.  It is always a popular cry, but makes little impression on anyone except those who feel they would be benefited.”[6]

Soldiers are not used to asking for what they need; it is contrary to their nature.  Combine that with a bureaucratic system not easy to navigate, frustrating to individual efforts and ineffectively organised, it is easy to understand how services are difficult to access and money goes un-dispensed.  In point of fact, 80% of the money set aside to help veterans and their families through 1919-20 was not spent.[7] It became clear that the Legion could advocate for veteran’s need because they received that assent by popular democratic vote from the veterans themselves.  Beyond securing what was felt to be owed, by building Legion Halls throughout communities it gave those who intimately understood what it had meant to serve overseas a place to gather.  “While some exorcised old demons through their writing, many more came together in Legion Halls to drink and sing and reminisce with old comrades.”[8] Modern psychology places high value on “talk therapy” and the Hall provided that fraternal support- as it would be within the military- and at a level only those who “have been in the machine” can fully understand.

Veterans require help and support to reintegrate, but should be disdainful of charity and subsistence which creates a dependence difficult to move beyond and harmful to society as a whole in the long run.  The Legion is Canada’s largest, Veteran-based community service organization mandated to serve Veterans and their families primarily through The Legion Service Bureau.  With more than 300,000 members in approximately 1,440 branches in Canada, the Unites States, Europe and Mexico, the Legion provides a number of programs and services.  From offering help through a number of avenues, it strives to support those who chose to fight for our freedom, along with their families who continue to support them.[9]

The Legion is dedicated to perpetuating remembrance, helping veterans and supporting the local community.  This is a holistic approach that accounts for the veterans as a part within society; an understanding what effects a part affects the whole-which is something a martial mindset understands without question.   The problem is not that long established institutions like the Legion are ineffectual, it is that they are not being used effectively through the complacency of those who have the ability to make effective use of a democratic advocating body; too often distracted by the glimmer and promise of charitable groups who assure the veteran and their supportive community of pay-outs and special treatment.  It might do well to question the motive of these recently created bodies, as while the Legion’s mandate is clear and sanctioned by charter do these other organisations truly have altruistic motives or is a popular concern being used to a personal advantage?  Contrariwise, Tom Eagles, the Royal Canadian Legion Dominion  President states “To this day, even with numerous changes over the years, including the adoption of our current name, the Royal Canadian Legion has never faltered in our efforts to improve the lot of veterans, ex-service members and their families. It has been our principal objective since day one, and we will continue to work for it every day forward.”[10]

With new and emerging concerns resulting from more recent Forces commitments, the Legion still remains a relevant and dedicated body.  However, the concerns of latter day veterans can only be addressed if those advocating on their behalf are made aware of those concerns.  It becomes imperative that these men and women who have made a contribution to Canada continue to contribute by becoming active within the Royal Canadian Legion; by supporting its executive and democratically expressing the needs of this community.