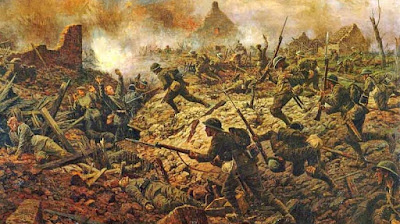 “It was decided that it was necessary to again
re-gain control and hold the enemy strong point North
of the RIVER.”- Maj. WH Collum MC, Bde Major
11th Canadian Infantry Brigade

It wasn’t déjà vu, Lieutenant CS Griffin, ‘A’ Company, 102nd (North British Columbians) Battalion had been here before.  “The main objective was the enemy strong point at M.30.d.2.3, ‘TRIANGLE.’”[1]  Griffin, and many of the men in the platoon he was leading into this attack had been by this way only two days ago.  Surprise had an elemental role in that effort, where a prepared and numerous garrison kept the Canadians from gaining the position.  No preliminary bombardment had been lain on for the sake of surprise and the Germans held this line in force. 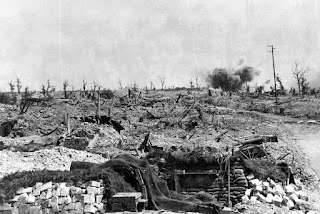 This was rebuffed even before the tubes were in position to be blown.  “The enemy immediately opened with heavy machine gun fire necessitating the withdrawal of the attacking troops.”[3]Mr. Lowrie was able to accomplish this without any casualties.  The very next day, Lt. Lowrie and his platoon had gone up in a prepared attack; in conjunction with a trench-clearing operation put in by the 5th Battalion, the Royal Leicestershire Regiment. 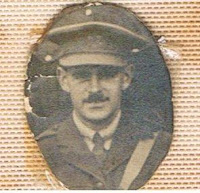 It was a splendid assault, the men having trained specifically for this task leading up to this trench tour.  All objectives were held within forty minutes.  “The operation resulted in the capture of twelve prisoners…thirty enemy dead were counted in the trenches and dugouts.” Lt. Lowrie didn’t live long enough to see it accomplished.  He had been shot dead within moments of the attack’s beginning.

All of that had been after Lt. Dimsdale had two quick attempts at it on the 5th.  It was determined that “the enemy was holding his trenches in force and apparently had no intention of evacuating.”[4] Dimsdale’s work was that of opportunity.  Upon taking over the trenches during the relief of 4/5 June, Lt. Dimsdale’s Company Commander, Major Scharschmidt had pushed his outposts forward to determine the whereabouts of the enemy.  Making contact had shaped into a hasty attack, with ‘D’ Company managing to capture the Electric Generating Station, and installation south of where the Souchez River passes by the town of Fosse.  It was an unexpected success, to say the least, but it left that mess of nastiness which was the Triangle between the Station and the Souchez’ southern embankment under German control. 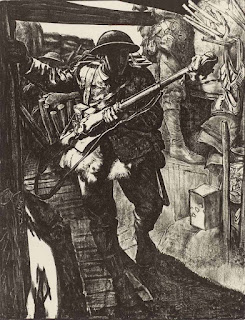 Planning had looked to capturing the line intact with the combined operations aside the 5/Leicesters on the 8th.  Maj. Scharschmidt’s bold move had created a more urgent case.  So long as they held the Electric Generating Station, the hard point at M.30.d.2.3 had to go.  ‘D’ Company’s work on the 5th had done a lot of good, as it “placed the major portion of CALLOUS and CANCEL trenches in our hands and there remained only the consolidation of the balance of these trenches to bring them into our defensive system.” [5]

The organised attack set for the eighth would work out the kinks.  It had to.  Further operations were based upon having that area secure by no later than the twelfth.  With two men killed in the attempt and five more wounded besides, M.30.d.2.3 had been taken, and was handed over, as per orders to the 5/Leicesters.  They were unable to hold the position, and once again, the bastard thing was doing German business under the new/old management.

Accordingly, on the tenth, Lt. Charles Stuart Griffin, a 26 year old clerk born in Hollister, California but living in Sidney, British Columbia before the war, and Sgt. Archibald Law, a Calgarian teamster by way of Glasgow sortied towards the Triangle in two concurrent raids. This was the affair put on without benefit of artillery preparation or shielding barrage on account of the idea of keeping the operation a surprise.  Primary objective (Griffin) was to gain CANADA trench, a line meant to be arcing north to south from the embankment and representing the eastern edge of the Triangle.  Secondary objective (Law) was the reducing and capture of the enemy strongpoint.

Both were no stranger to this sort of enterprise.  Lt. Griffin had seen a fair deal of action serving as an NCO with the 7th Battalion, being afield with them from August 1915.  Twice wounded in 1916, he would become the second highest ranking effective man in his company, cleaved in half to a meagre 60 men at Vimy.  Under Lt. L.J. Bertrand, who had been a junior subaltern until the events of the morning placed him in command, No. 4 Company, 7th (1st British Columbians) Bn. held their objective despite their heavy losses.  Griffin was promoted to Sergeant, awarded the Military Medal and then given a commission and transferred to the 102nd.  Lt. Lancelot Joseph Bertrand, born in Grenada, British West Indies, making him one of the very few Caribbean Canadian officers to serve overseas, received the Military Cross.  He would be subsequently killed in action at Hill 70 in August of 1917. 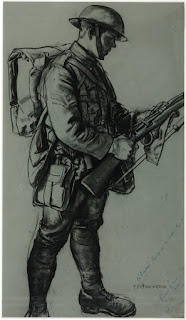 Sgt. Law, his nearly two years overseas with the 102nd punctuated with an MM at Vimy, saw his effort come awry with the detonation of a small enemy mine which either had alerted or had been instigated by a prepared and numerous garrison who “opened fire with bombs and machine guns….the men could not reach the Hun with hand grenades, but covered their own retirement by rifle fire and rifle grenades and our Stokes guns threw 20 rounds into the enemy, causing heavy casualties.[6]

Lt. Griffin had a similar rebuff.  His men had succeeded in gaining the first line of trenches and putting in place one of the blocks they had been tasked with, “but then found that CANADA trench south was a series of shell holes; this exposed area was swept by enemy machine-gun fire and whizz-bangs; moreover, much of the trench as was left was heavily manned by the enemy.”[7]  Both raids returned to their starting points having achieved little at the expense of three men killed and eight wounded.

Never mind.  Lt. Griffin’s platoon had been selected for the attack on the twelfth to take the trenches beyond that irksome concrete box.  The platoon would just have to pick it up on their way, so. 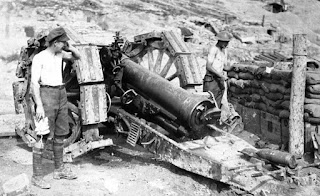 “Preparations,” the 102nd War Diary closes the entry for 11 June 1917, “were complete for attack on the following morning.” Lt. Griffin and his men, many of whom had made the prior attempt, went over at 7 a.m.  In the days between attacks, more artillery had become available.  Canadian Corps Heavy Artillery walloped the area on the 11th with 350 immense shells.  Australian and British field guns on loan to the Corps provided covering and creeping barrages in direct support of infantry operations.  The objective was taken in ten minutes with little opposition.  Most Germans who could broke for the rear.  Sixteen were taken prisoner, along with two machine guns.  Artillery fire had killed 14, wounded 10, not including what prisoners stated were the five killed and ten wounded since midnight who had already been evacuated by German medical services.

This wasn’t the end for Lt. Griffin’s platoon.  While they set up blocks and repaired the line, supporting troops hurriedly dug saps out to link the old line with the new.  Within the first quarter hour of Canadian possession, the first counterattack was made.  “An unorganised attack was launched by…about 100 men in mass formation…followed by an officer with a revolver who appeared to be driving them on.”[8]  This was utterly shattered by Lewis gun fire and requested artillery.  Germans came on again, 150 strong at 10 o’clock.  A more organised and disciplined effort, it was likewise put on its heels.  Lt. Griffin’s sparse line had been bolstered by two bombing sections from ‘B’ Company, and work to consolidate the ground continued. 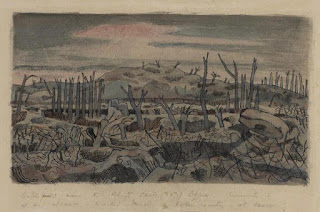 Another counterattack was checked at 3.30 “by bombs and rifle grenades which inflicted heavy casualties on the Hun.” Once again, the Germans tried, at ten that evening “under a very heavy barrage.”  Arriving in force, this attack “was dispersed by our Lewis gun, rifle and grenade firing.  It was also dealt with by our artillery barrage.”[9]

Six men were dead, twenty-eight wounded, including Lt. Griffin.  Shrapnel had broken his right arm and lacerated his left hand.  The concrete machine gun emplacement and the Triangle it guarded lasted out in Canadian hands, the hard fought men of the 102nd relieved that evening by the 85th Battalion. 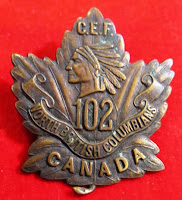 “In nine days the Battalion, or some substantial part of it, had "gone over the top" six times; in the face of desperate resistance it had eventually carried out all the tasks assigned to it, and in addition to immeasurably strengthening the Canadian positions in the area it had inflicted incredible casualties on the enemy. But our own losses were found to be very heavy.”[10]

Charles Griffin was awarded the Military Cross for holding throughout the counterattacks on the twelfth, though his wounds would prevent his return to the front.  Sgt. Law was given a bar to his MM.  He would die of pneumonia in 1918.