By the Left, Quick March!


In an effort to expand my professional network to include as much of my potential market as possible, I called upon an old college friend to help supply some contact information. As it turns out, this friend is heavily involved in a living history group: The Royal Canadian Air Force Commemorative Squadron.  In the past, I've been keen on living history and interpretation groups but have had little opportunity to participate.  That will change this Saturday when I shall join the RCAFCS for a goodwill parade in Kingston, Ontario.

What this raises is an interesting problem.  I haven't had to do any parade drill in well over a decade.  Notwithstanding, of course, the subtle differences between air force and army drill, there is also the changes to the movements made between the era I will be representing and the era in which I served.  Primarily among these discrepancies is the order "slope arms", the act of resting the rifle on the left shoulder, which went out of style half a century ago.  Lacking a rifle to practice with prior to the parade, I am, unironically, teaching myself these movements with a broom.

It was thinking on this which led me to think about drill on the whole, especially its development and purpose.  When foot drill was developed centuries ago, it had a direct and practical purpose. The need was to be able to manoeuvre large bodies of men, precisely, into the most advantageous position on the field of battle.  To do this quickly, and more important, impressively might even be enough to inspire the opposing force to quit the field without fighting.  Should battle be joined, the discipline instilled by repeated practice of responding immediately to words of command could be enough to hold the line when the chaos of combat descended.

By the turn of the last century, the use of foot drill as battle craft had gone out of practical fashion.  It had become, by and large, a ceremonial practice, but it was still taught at the very basic level of military indoctrination.  On the surface it appears as if soldiers are being instructed at great length and effort to perform movements which might look grand on the parade square, but of no actual tactical value.

This attitude persists today in the grumbling of recruits struggling with the unfamiliar and sometimes complex movements which drill requires.  "Why are we learning this?" is something I've heard quite often, usually coupled with the assertion that the new soldier is destined to be up at the sharp end and has no intention of fulfilling any ceremonial function for which drill would be necessary.

Fact is, that although the need to march men stiff-backed and high stepping upon a battlefield has long since passed, the other purpose remains, and remains integral to the function of an armed force: That of discipline.

This is first apparent physically, mainly for the need to be completely aware of one's entire body and the execution of isolated movement.  Learning in groups with the goal of precise unison gives a standard to achieve among equals and is the first instillation of the military truism of team above individual.

The method by which drill is taught seeks to create an automatic response to short cues.  A difficult concept in a free thinking society, it is crucial and life-saving in the field. 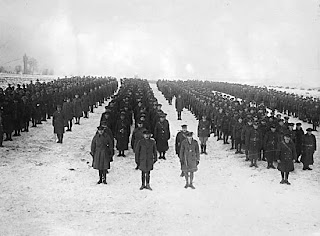 It is not only physical discipline, or indoctrination to military authority; based on orienting terms such as "advance", "retire", "left" and "right" where it's possible to move to the right by means of a left turn, candidates must think in what at first seems the contrary.  Drill then becomes a mental discipline which requires the student to think quickly to initially unfamiliar prepositions.  Through first an impeccable example in the instructor, repetition and constant correction one learns to yearn for achievement, help comrades, inspire confidence, and take pride in appearance.

On today's modern battlefield, some of the same aesthetic similarities in condition exist in parallel with the entire history of warfare: Fear, confusion, the necessity to make the right decision and follow through faster than one's enemy.  All of what drill inspires counters the former two and gives ability for the last.
Posted by Christopher J Harvie at 00:00