Not Quite the Ticket

Boy howdy was I feeling rough last week.  After a fantastic weekend parading with the RCAF Commemorative Squadron, by Wednesday I was coming down with a painful sore throat.  This excuses my lack of an update last Thursday, while at the same time providing me with a topic I have yet to look over, that of disease during the war.  I'm on the mend, after the doctor actually recoiled upon examining my irritated uvula and gave me an issue of antibiotics.  Thankfully, my Twitter and Facebook feeds came in handy to inform about my inability to post; and it is my extraordinary pleasure that my suggested topic appeal to Oxford University's WWI Centenary Project enough for them to invite me to submit the following essay to their site. 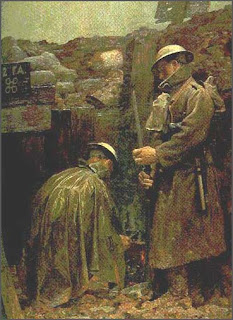 I had gone over the treatment of battle casualties some time ago in my piece "The Blighty", which overlooked cases of illness or corresponding mortality rates.  Communicable disease has always followed armies, were its spread has been encouraged by living communally in close quarters in dubious hygiene.  We understand today more properly the relationship between physical hygiene and the spread of viruses and bacteria; and largely that understanding began to take root with the medical advances of the mid-nineteenth century, unironically expedited through the military conflicts of the time.  Four times as many British soldiers died as a result of illness than did in battle during the Crimean War.  Figures from the U.S. Civil War cite 224 000 deaths by disease and accident for the two million who served in that conflict.  Each of these wars have their histories of diligent health care professionals who championed the cause of sanitation.

The popular notion of men on the Western Front being subject to terribly unsanitary conditions belie that the First World War is the first major conflict in which more service personnel were killed in action than by disease.  Improvement in medicine and an enforced hygienic discipline in the trenches is one half of the reasoning behind this.  The other has to do with a like advance in the technological methods of war which, cooly speaking, made inflicting casualties more efficient.  For the British Empire, found in the "Casualties and Medical Statistics" volume of the Official History of the War, of 876 084 total deaths in WWI, some 113 173 were the result of "Disease or Injury", a ratio of 1/3 that of death in combat.  Even then, the numbers for disease fatalities are eclipsed by both "Died of Wounds" (167 172) and, poignantly for the war, "Missing, Presumed Dead" (161 046).

The static nature of trench warfare actually allowed for a great attention to detail for preventative factors which helped curb the spread of disease.  Prevention can only do so much against an extreme situation.  Fortunately, with considerations in regards to both discipline and morale, the military system was well capable to administer to health concerns.  From the timely removal of the dead for burial, a properly effective casualty clearing system, staunch rules for the construction and maintenance of trench latrines to a daily routine of policing up rubbish and wastage, life at the front was as healthy as could be under the duress of being the leading edge of battle.

The statistics listed above do not accurately encompass illness which did not become terminal.  While sanitation at the front was better than supposed, the trenches were hardly pristine and our modern knowledge to how psychological stress effects the immune system gives rise that many hundreds of thousands of men suffered illness not quite serious enough to be excused from the line, or were stalwart enough to continue their duty when they should have sought treatment.  Based upon the nature of moral and legal repercussions it can also be supposed that many more were suffering from venereal disease than reported.  Even then, the records indicate 153 531 admissions for VD on the Western Front alone, accounting on average from year to year 24 cases per 1 000 men in theatre.

The rate of disease in armies during WWI was often predicated by locale.  For the British, by far the worst theatre was that of East Africa where unfamiliar heat and a range of tropic ailments felled thirty one men for each soldier killed in action.

Not to be overlooked is the devastating influenza pandemic which first appeared on the Western Front via Spain by mid 1918.  It caused for the British between October and November of that year 45 000 patient admissions at a mortality rate of six per cent.  The flu began to spread perniciously at the unfortunately co-incidental advent of the Armistice.  The diaspora of demobilized soldiers back to homes around the world communicated the virus to untold millions.  Exact figures on how fatal the Spanish Flu was are still uncertain, though from what we do know it is one of the most disastrous plagues in modern history. 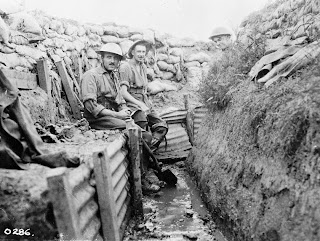 Because of the incidences of disease amongst soldiers, medical improvements which occurred as a result of necessity in the war do not solely reflect treatment of combat wounds.  They also inspired practices in treatment and, more importantly, prevention of spreadable diseases.  Despite the horror and loss of the years 1914-18, one of the positive results was a general increase in standard of health which prepared the way for many national systems of public healthcare.


Posted by Christopher J Harvie at 00:00