What Did You Do in the War?

My health having returned after a cycle of antibiotics, I'm back in fighting trim.  I've been dedicating more and more time to my work with Spirit of Remembrance (SoR), and have begun a marketing campaign to introduce the business to potential customer bases in Canada.  What this means for IYBF is that updates will now fall once a week, on Mondays.  By all means if you or someone you know is interested in the offerings of SoR, or just wish further information, please send an email to my office inbox here.  I am currently disappointed with Facebook who have decided to block links to blogger sites.  What they've done by this is to severely limit my ability to promote my work effectively.  Until this block is rescinded, or another means becomes available, you may still find updates and links via my Twitter feed. 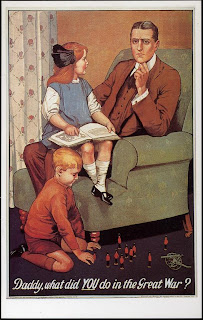 History can be a touchy subject.  Widely held preconceptions of events that do not align with fact are prime points of contention.  Nobody likes having their illusions shattered by objectivity if they've been reliant on a subjective viewpoint.  A prime example of this occurred just recently.  A friend of mine expressed pride in one of her ancestors having been present at the Battle of Vimy Ridge.  As she had no other information about his service, I volunteered to do a little ad hoc research to find out more.  Through material freely available online through scanned archive records, and being able to place the soldier at a particular place and time, I was positive I could put together a brief synopsis of her relative's war service.

A common last name meant a short process of elimination to positively identify the man in question.  His attestation paper, when viewed, revealed a truth very different from the one my friend had carried with her.  Her relative had been conscripted under the Military Service Act (MSA) of 1917.  He was taken on strength at the age of 22 on the 15th of May, 1918.

"I didn't hear that." my friend replied, in denial.  In fact, given information on the document it's very likely he never went overseas at all, but I didn't have opportunity to present that conclusion.  My friend had stopped listening.  I feel bad for offending her sensibilities, while at the same time her refusal to accept fact offended mine.

I can suggest reasons as to how this revision of personal history may have been created.  Imagine how one who didn't participate in the war may have been ashamed of this in the face of adulation for returning veterans.  Far better, in some cases, to be fast and loose with the truth to fit in rather than be judged harshly.  Considering this individual was of military age before conscription was enacted, he may well have suffered a branding of cowardice or lack of patriotism, neither one an ideal label to live with in those times.  As the generations proceeded, the false claim became an accepted truth, ingrained into the family history and is why the misconception is hard to let go of.

But it must be.  First, because it ignores any actual contribution, no matter how small, this man made to history; and to continue to claim misinformation as truth devalues the efforts of those who were actually there.  It is the same distaste I have as when I overhear a "barroom hero" regaling obviously false stories about their supposed military adventures as a means of attention getting.

It is precisely this type of selectivism which makes the prospect of the objective educational approach extremely difficult if not impossible; very few people are willing to abandon long held understandings even in the face of documented evidence to the contrary.  I run into this constantly whenever I allege that the Battle of Vimy Ridge itself is far more inflated in the consciousness of Canadians than history makes allowances for. For all of that, I am actually a bit of an apologist myself.  I have, in this column many times referred to or referenced from Gordon Corrigan's excellent First World War examination, "Mud, Blood and Poppycock."  It was several times I passed up reading it because the tag line promised "This will overturn everything you thought you knew about Britain and The First World War."  Perhaps a bit closed-minded, I didn't want my knowledge overturned.

When I did finally read it, the way in which Corrigan presented and supported his arguments brokered no debate from me, and was my introduction to a more open minded approach to my study of history.  Even after that, from time to time, I find that I still carry pre-conceived notions.  As recently as last week, preparing to write "Not Quite the Ticket", I was sure that WWI was the last conflict in which disease mortality eclipsed combat fatalities, and was preparing my text along those lines.  When I disseminated the hard facts, it was proven that my point of view was incorrect.  I had to rework the intended angle of the piece, and failing to have done so would have resulted in a work subject to derision as my beliefs weren't supported by fact.

Objectivity is the goal of proper historic study.  As the subject of history is tied into the human experience it is hard to let go of emotional connections which make objective thought difficult.  Perhaps it is best to describe a complete understanding of history as a compromise between objective and subjective thought, with the precedence being given to the former rather than the latter.
Posted by Christopher J Harvie at 00:00