To Close With and Destroy the Enemy

This is the role of the infantry, one such which has remained constant even in light of the technological and tactical advances in warfare.  In this two part series, If Ye Break Faith will examine how this role has changed little, but evolved much; how the post-industrial battlefields of WWI necessitated a large part of this evolution which introduced concepts still employed today without fundamental adjustment to doctrine which remains immutable.

It is ultimately to the infantry to seek a decisive result from battle.  It is this responsibility pared with those unique aspects of an infantryman’s experience 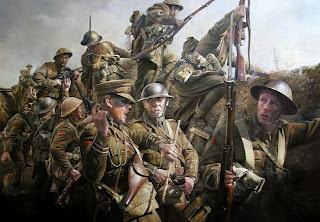 which allows a certain pride of place of the infantry within the military.  “It is he who must seize the ground and hold it.  And he must do this on foot, armed with only what he can carry at the mercy of the elements and over every sort of terrain.  There is nothing remote about war for the infantryman.  For him war has always had a very personal dimension.”[1] The infantry fulfills its role by use of the technique known as “fire and movement.”  Ultimately, “The main essential to success in battle is to close with the enemy, cost what it may”[2]  Fire and movement makes this possible.  By overcoming the enemy’s resistance, with superior firepower the infantry are able to press forward.  It might seem deceptively simple, but as the two tasks are undertaken concurrently, in reality this is a very complex task which requires-has always required- a great deal of control and coordination. [3] Such control can only be gained through training and repetitive drills.  This is accomplished by first smaller units perfecting their role before working in higher formations.  Practicality is the reverse of this.  The attack, by use of “fire and movement” is an exercise in diminishing values.  A divisional attack, for example, will use its artillery assets to allow the forward brigades to advance under fire.  The brigades likewise employ their own gun- with a little more precision than the division barrage- directed against the brigades’ objectives and so let the component battalions gain further approach, and so on down the line of company, platoon and section. The 1909 British Army Field Service Manual makes this notion clear “All leaders, down to those of the smallest units, must endeavour to apply, at all stages of the fight this principle of mutual support.”[4] 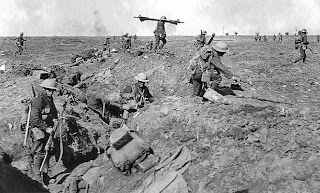 The process of bringing superior firepower onto the enemy is itself known as “winning the firefight.”[5] No matter the important placed on this, in itself it is just a means to an end.  Winning the firefight is what enables the infantry to move to “closing distance” from the enemy where the assault to destroy him will be carried out.  Equally matched opponents and strong defensive positions meant that this crucial step of the attack was far more difficult to achieve, almost to a point of futility during the war.  Adjustments would be required, but it would take some hard lessons to inspire them.  Textbook dictates and rehearsed technique are put in place not particularly to instill inflexibility in employment, but create such familiarity with doctrine that there is room for initiative and improvisation which the battlefield requires.  With insufficient grounding in these fundamentals the likelihood of a successful infantry attack are greatly diminished. 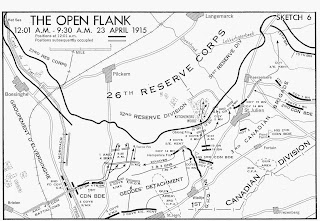 Wood made by the 10th and 16th Battalions, First Canadian Division late on the first day of the 2nd Battle of Ypres.  German gas attacks against French Colonial units to the left of Canadian positions had driven the defenders out of their trenches, leaving a clear path towards the immediate objective of St Julien, and the Canadian flank exposed.  In one way, the gas worked too well.  German infantry in pursuit of the fleeing French Algerians had gone much further forward than the initial advance had meant to.  These point units were supposed to have established a new defensive line to allow follow up forces to jump off for the assault against St Julien.  Instead, they had pressed into Kitchener’s Wood.  While four British guns had been captured, the Germans were too few in number and dangerously over-extended.  If an aggressive counter-attack could be made quickly, the Germans might be caught out.  Two conditions in this proposal worked against the Canadians; that they had yet to mount such an attack in earnest, and it would have to be done at night.  The 16th Battalion had come up to 3 Brigade HQ at St Julien from reserve positions outside of Ypres, a route march which took hours to complete, the 16th arriving by 2200hrs[6].  This battalion would be supporting the 10th Battalion’s assault on a German trench at the south end of the wood.  Once this was taken, both battalions would move into, and clear out, the wood itself.  From the Division’s 2nd Brigade, the 10th Battalion made up of men from Western Canadian (Calgary and Winnipeg, mostly) Militia units would be leading the advance; its four companies lined up two abreast and two deep.  Behind them the 16th (Canadian Scottish; an amalgamation of pre-war Highland Militia regiments) would follow in the same formation. The simplicity of the formation was accounting for the unknown ground the men would be moving over in the dark; the best solution for inexperienced officers to retain tight control of inexperienced men. Each battalion was under the ultimate command of its Colonel, but no appointment had been made for overall command of the attack.  This oversight would make for costly consequences.

German penetration had come as far forward to a built up area known as “Oblong Farm” to the southwest of the Canadian’s trench line objective.  Lt Colonel Leckie of the 16th Bn suggested his 10th Bn counterpart, Lt Col Boyle detach some elements to keep the farm under suppressing fire.  Interpreting his orders too literally, Col Boyle didn’t consider operating on initiative and decided to go forward without isolating Oblong Farm.  His orders, from General Alderson had made no mention of the Farm, only because Alderson had no information on it.  The ground over which the Canadians would attack had not been properly reconnoitred.  “Artillery support was provided by a British battery and the 9th and 12th Batteries of the 3rd Brigade CFA (Canadian Field Artillery), firing on the northern part of the wood and beyond.”[7] This made a total of thirteen guns supporting a two battalion attack by firing at a point well beyond the primary objective.  It would hardly be adequate in either volume or area- a vital part of “winning the firefight” would then be absent from this attack.  Nevertheless, the Canadians were enthusiastic, Lt Col Boyle quipping “We have been aching for a fight and now we are going to get it.”[8] 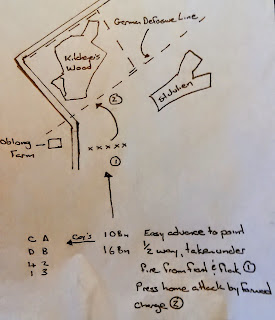 “During the advance in the darkness over unknown ground companies and platoons lost cohesion.”[9]  The two battalions set off at 2345hrs.[10]  This made a turnaround time of six hours from the initial German attack to the Canadian counter attack.  While this may have seemed quick work at the time, but it was hardly efficient.  German soldiers had made excellent use of the interceding hours in digging hasty defenses and bringing forward machine guns.  Within the first fifteen minutes, 10th and 16th Battalions closed half the distance to the objective, facing minimal incoming fire.  Ordered to advance in complete silence to obscure their presence had aided in this good start.  At about the mid-point, there was discovered a fence line which had to be gotten over.  The noise of men and their equipment struggling over this obstacle alerted the Germans- both in the objective to the front, and from Oblong Farm which was now in a position to provide enfilading fire on the Canadians.  This fire was heavy and hitting the attackers on front and flank.  Out of place, in broken and mixed formations the final 300 yards was closed by rushes. 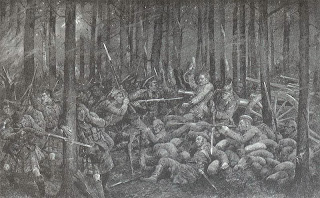 weight of the assault.  Hand-to-hand combat was frequent.  Casualties were higher than they should have been.  Against reason, objectives were met.  With the exception of a pocket of German positions within the wood, the trench had been taken, the woods occupied and the four lost guns re-captured.  The two attacking battalions had lost about two thirds of their strength, inclusive of most of their officers- among them Lt Col Boyle who had been fatally wounded by a German machine gun.  German casualties were considerably lighter[11].  It is difficult to credit the success of the attack based upon the conditions in which it was made.  Perhaps it could be said that it succeeded more from the Canadians not knowing the odds against them.  In any analysis, Kitchener’s Wood had so many factors going against it that it wouldn’t be considered a well-executed attack- even by contemporary standards- except that the attackers had made their objectives.

A latter day General, Brigadier General Vernon who once commanded Land Forces Central Area (Now 32 Canadian Brigade Group) offered this observation which might fit as mitigation as to why the attack at Kitchener’s Wood went as it did: “Field Marshal Slim…noted that the Army as an institution is an inverse pyramid: everything depends upon the skill, motivation and determination of the individual soldier.” This may be why novice soldiers can still achieve under circumstances which would usually project failure.  Such actions, like it was at Kitchener’s Wood are usually very costly.  Standards of proficiency-at all levels- would be required; along with the required adjustments in doctrine in keeping with the evolution of modern war.  Within two years the Canadians would have incorporated the lessons of this action, among others which would allow them to be capable of a Corps sized infantry attack- that of Vimy Ridge.