“I don’t believe this all happened by chance or by luck.  I believe these medals were meant to find their way home, back to Private Lickers’ people.” 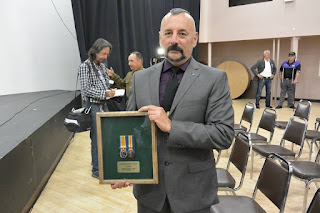 It is an extreme pleasure to bring to you a very special installment of If Ye Break Faith.  Over the course of several months, I’ve had the privilege to work on a tremendous project, and today’s post will tell the story of how this all developed to its happy conclusion in a ceremony held in Brantford Ontario on the 27th of July.

It began, simply enough in February, with a post on a Facebook group for Canadian Forces service members.  Two medals from WWI had been passed to Ralph, a Canadian Army sergeant.  His parents had come upon them many years prior when cleaning out a rental property they managed.  With Ralph’s connection to the military, his parents thought he might have an interest in them.  The question Ralph posed was to ask opinion as to what would be best done with them.  Overwhelmingly, almost to the point of unanimity, the response was that living relatives be sought and the medals returned to the families of the recipients.

One problem was that Ralph didn’t quite know where to begin.  I offered some suggestions, and helped clarify a point of historic fact.  Somehow, that was sufficient to place me in the role of coordinating these efforts.  Thankfully, it turned out that my inquiries to determine lineage landed with some very dedicated and competent individuals- professionals and enthusiasts alike- which made the search much easier than had I struck out on my own. 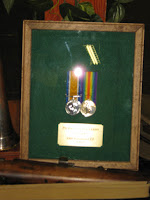 The first medal in question was a Victory Medal originally issued to David Andrew Lickers, a member of the Six Nations reserve in Brantford.  While the search to find a living relative got underway, I had opportunity to study his service records.

History may better remember the giants- of politics, arts, science and war- but the story of humanity is within the deeds and achievements of any individual, regardless the breadth of their impact or influence.  David’s story is much like that.  Looking into his military records, it is very plain that he did not see much of the war, but he had seen enough.

Three brothers, Joseph, David and William all joined the same battalion, the 98th. Joseph went first, in November of 1915, followed by William in December and David that January.  The 98th, after arriving in England in July 1916 was broken up for reinforcements.  A draft of these men, including David and William arrived in France to be assigned to the 58th Battalion in September. 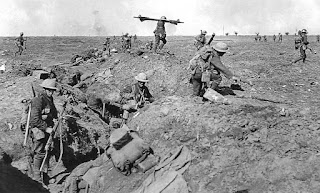 Their first major action would be just days away, in an attack on a German defensive line at the Somme code named “REGINA TRENCH.”  It was a costly engagement.  The 58th’s War Diary notes: “In crossing ‘no-mans-land…Coy. ‘D’ and…Coy. ‘C’ suffered considerably from machine gun fire and had many casualties.”[1] On reaching the trench, it was found that artillery had failed to cut the wire; and many of the battalion’s casualties were caused by direct fire as they attempted to find gaps in the obstacle. Some parts of the enemy trench were gained and were held for about half an hour before being forced back by a devastating counter attack.  Lt Col H A Genet, CO of the 58th noted in his report, “No praise can be too high for the splendid manner in which the men fought and continued to fight until the situation was hopeless.”[2]

For the 8th of October, 1916, the 58th Battalion’s casualties are listed as 30 killed, 144 wounded and 111 missing.  William was among the dead.  While nothing recorded gives us a certainty of events, it is entirely likely that David was close by and perhaps even within sight of William when he was killed.  There is no denying the coincidental timing of William’s death and that for eight days after the battle, David was missing.  He returned to his unit on the 16th of October, there being no indication of where he was or what he had been doing for those missing days.  Sometimes, it is what the records don’t say which can tell us much.  Whatever reasons David may have given for his absence, they were sufficient for him to not have been charged with being Absent With Out Leave.  He didn’t stay out of trouble, though.

David was sentenced, on the 31st of October to 14 days’ Field Punishment #1, a harsh form of extra duty in which the soldier could be held in restraints or tied to a fixed object for hours at a time.  His crime was drunkenness.  In that, David was not at all different than many soldiers, young men away from home introduced to vice, except that he got caught.  At this remove of one hundred years, it is suppositional to put a motive to David’s crime, but I don’t think it is too far a stretch to say that William’s death may have had something to do with it.

Before he could serve his sentence in full, David went back into the line with his battalion.  While under fire on the 3rd of November, David was “Burried(sic) by a shell and hit on (the) head by (a) sandbag.” He remained unconscious for three weeks, with paralysis on the left side of his body.  He was sent to convalesce in England, his continuing symptoms being “’epileptiford seizures’, as many as four or five a day….very nervous at times, is easily excited.  Sleeps poorly, wakes up with sudden starts and troublesome dreams.”[3] After some months of hospitalisation, David was invalided back to Canada for “further medical treatment.”  In early 1918 his condition was re-assessed and David was found to be “physically unfit” for further military service.

On the 18th of February, 1918, at Exhibition Camp in Toronto, David was discharged from the army.  His character and conduct marked as “good” despite his transgressions.  It is at this point that David fades into history like so many others who came home from war and went on into private life.  I fell it is fitting that we’re paying tribute to an ordinary man.  Posterity may better remember the giants; but history is truly made by ordinary people.

Instrumental in the search for David’s family connection was the Woodland Cultural Centre.  The Centre’s staff made inquiries of their own and with their resources.  After a number of weeks, a great-grandnephew was located, contacted and appraised of the developing story; and agreed to participate.  From there, planning began for a ceremony to re-invest the medal with the Woodland Centre graciously offering themselves as the venue.  The ceremony itself, which took place on the afternoon of Monday 27th July was a genuine and heart-felt reunion of the past to the present. 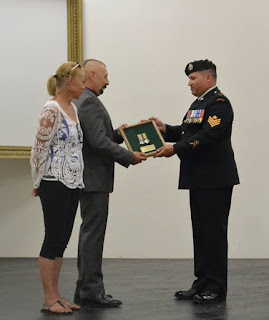 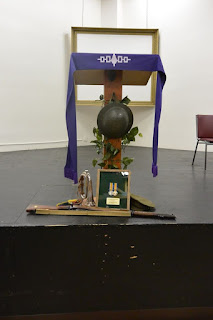 I feel that this may just be a drop in the bucket.  Already, efforts are underway to trace the family of the recipient of the other medal in Ralph’s possession; that of Pte H G Mutford of Newfoundland.  Thanks to very good media coverage of Monday’s event, hopefully others will be inspired to put a similar context to discovered military artefacts.