To the Green Fields Beyond

The Purpose of the Battle of the Somme Part II: Execution 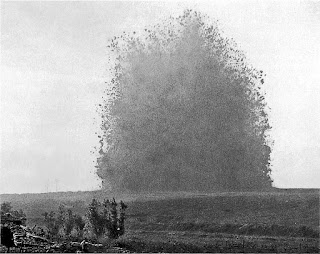 At 0720 hrs, 1st July, 1916, an underground gallery sited beneath the German line and packed with 20 tons of ammonal[1] was detonated.  Ten minutes before zero-hour, Hawthorn Mine, as it was known, devastated the land on which it was buried; creating a shockwave felt for miles, the debris flung upward returning as heavy clods of earthen rain.  For all the noise and bother, detonating the mine did more to alert the Germans of the coming attack than being an aid to it.  Overall, artillery preparation had been poor.  Only at the southern end of the planned line of advance, where the British and French met had there been any significant reduction of German defenses.  French artillery in the area operated differently from the British and had a greater availability to (and understanding the employment of) high explosive shells.

Regardless of what lay ahead- shattered trenches or intact works- the men were going.  They were as ready as they could be, well, as they were ever going to be.  For a great many, this preparation was grossly deficient as well.  What followed has become legendary, a slaughter of 60,000 men for no result.  Military historian Major Gordon Corrigan puts it succinctly: “The Somme is often cited as an example of naïve bravery pitted against hopeless odds, coupled with stubborn pursuit of goals that were, quickly obvious as being incapable of achievement.”[2] However, Corrigan was expressing the common sentiment so that he could illustrate how fact refutes perception. 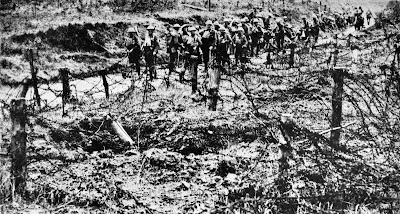 There can be no denying the terrible loss experienced by the British on 1st July.  One third of the day’s casualties were fatal, and many of the wounded would never return to active duty.  The Germans were still in possession of their defensive line, for the most part, so any Allied gains can be easily overlooked.  In actuality, what gains had been made, though diminished in afterthought by objective failures gaining precedence, were proof that adequate training, preparation and resources could be sufficient against a fortified trench system.

North to south, from Beaumont-Hamel to La Boiselle very little, if anything was 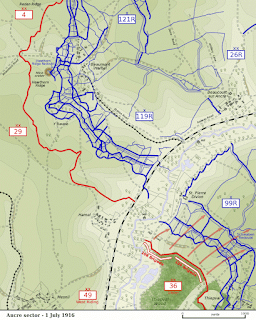 gained on July 1st.  Between La Boiselle and Fricourt a tiny crescent of ground had been won.  From, but not including Fricourt to the boundary with the French just north of the River Somme better progress had been made, in some places (particularly around Montauban) up to two and a half kilometers.  Only in this area, a third of the entire length of the frontage of attack were the first day’s objectives met. None of the villages within the first day’s objectives had been taken.  This was especially worrying at Fricourt which jutted out in between the small limit of advance on the left and the lightly deeper and wider gains on the right, creating a miniature salient containing the built-up area of Fricourt at its peak and a dense wood immediately west of the village.

For the 29th Division, attacking at the northern end of the line, around Beaumont Hamel, “The casualties were severe.  They numbered 5,000.  The loss of officers…was disproportionately heavy.”[3] Some battalions in the 29th lost upwards of eighty percent of their effective strength; the loss of leadership a critical blow to maintaining fighting capability.

Sir John Keegan, the much admired historian, assigns much of the blame to the failures of the first day to deficiencies in artillery preparation.  By and large, he is not incorrect.  What gains were made had been mostly in the area where the French artillery had been active in support of the line where they and the British abutted.  Keegan gives something away in his inaccurate description of shrapnel shells.  He opines that the ground into which these shells were fired absorbed the impact and thus negated effectiveness reveals a military ignorance.  Shrapnel is 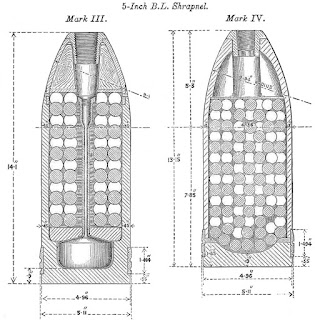 designed to air-burst, scattering its steel shot in a wide pattern.  If shrapnel was meant to impact detonate, it would have severely diminished its intended use- as an anti-personnel weapon.  The reason why shrapnel failed to cut German wire, as was the intent, is that the wire, being tensile, could absorb blasts of shrapnel and retain its strength.

I raise this point not to castigate Sir John, put to illustrate that he doesn’t completely comprehend the subject matter he is describing and as such any conclusions he may draw will have at least a shadow of ignorance attached to it.  Reading Keegan for historical poignancy requires, at times, to cut through the treacle of his sentimentality and bias towards the British and a blind eye to his technical ignorance.  He is correct that the New Army formations had not been adequately trained- but doesn’t seem to understand what regular standards, particularly battlecraft were in 1916.  The Regular Army of the pre-war years was proficient in the type of “fire and movement” Keegan notes as being newly developed and of French origin. In personal conversation, I have more than once heard these so-called “new-tactics” (which are illustrated in the 1909 Field Service Manual) as having provenance with other nationalities, particularly Canadians and Australians, so Keegan is not alone in this oversight.  These things do call into question conclusions made upon misunderstood fact.

It certainly can’t be said that thirty percent of objectives taken would be considered adequate against losses and failures.  Some minds will then point to the apparent futility of continuing operations at the Somme. The core of this argument is whether the battle was meant to be the war winning breakthrough, an attritional battle or first one and then the other when that failed to materialise.  “This setback”, of the first day, according to Sir Basil Liddell Hart, “negatived the original idea of a ‘breakthrough’ to Bapaume and Cambrai, and Haig for a time fell back on the attrition method- of limited advances aimed to wear down the German strength.”[4]

Haig’s overall plan for his army’s part in the 1916 offensives had to consider the factors of what was occurring elsewhere, particularly where the Germans were operating offensively.  His stated objectives, reproduced in the collection of his despatches, for the combined Anglo-French offensives of 1916 were:

II.            To assist our Allies in the other theatres of war by stopping any further transfer of German troops from the Western Front

That breakthrough isn’t mentioned leaves opinion open to believe Haig wanted an attritional battle.  For many, believing that the Somme was supposed to create the sought after breakthrough, the subsequent months of repeated attack must seem either foolish or stubborn.  However, as the battle’s main objective was to wear down Germany’s ability to resist-urgently in light of a similar strategy affected by the Germans against the French at Verdun.  The extension of thought is along the lines of Niall Ferguson’s notion of “when the breakthrough failed to materialise, all resorted to the arguments of attrition.”[6]

It is a fair shock to see Haig’s first reference to 1st July contain the observation “the success” of the opening day “came as a surprise to the enemy and caused confusion and disorganisation in his ranks.”[7] seems a trifle generous of an assessment, or even willingly obtuse.   Haig’s despatches, if taken at face value seem at least a little separate from reality to the point of near delusion at times.  It would be, however, prejudicial to make assessments of his character based upon these writings.  The field Marshal submitted these despatches as progress reports to his employer, the government.  Not being made redundant involved putting all events in the best light possible.  That the despatches were concurrently published in newspapers also influenced Haig to write with a positive spin, to keep public opinion of the war likewise positive.  It would be a pity to think that Haig’s reputation for being out of touch, emotionally cool and heartlessly calculating may have basis in his own words which were not meant to be anything approaching expository.  Brigadier Sir Richard Holmes makes his assessment clear that Haig’s envisioned purpose for the Somme battle is at best unclear.  “The evidence suggests that he hoped to break through the German lines.”[8] The disagreement on the nature of the attack between Rawlinson of 4th Army and his C-in-C Haig wasn’t as polar as attrition v. breakthrough but along the lines of what was achievable in regards the limit of the first day’s planned advance. 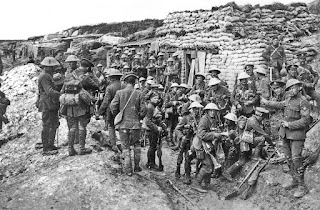 breakthrough of the German lines, as this would be war winning.  This was no less true at the Somme, at least in the opening phases.  What is overlooked is that this breakthrough wasn’t the goal of the first day’s fighting.  Projected plans for the exploitation- to which infantry and cavalry would be tasked- used the German second line, which was an objective subsequent to the first day’s advance as the start point.

In any event, wearing the enemy down would be by its nature, crucial to attempting to push through the deadlock and bring the war back to mobile operations.  Given that most of the first day’s objectives were not met and thus creating an uneven line in danger of being over-extended, reliance of piecemeal attacks up and down the frontage to shore up the lines would be necessary before a general advance could be resumed.  In this period, all efforts would be made to wear the enemy down, either physically or morally, so, yes, attrition, but only with a conclusive mind towards transitioning from a wearing out process to the breakthrough which might win the war.