Not War, But Bloody Butchery

“General, I have the honour of commanding the finest body of men I have ever seen”
-Lt Col E Hilliam, O.C.
25th Canadian   Infantry Battalion

What little was left standing of Courcelette had either been incorporated into hasty defensive positions or had been too shattered to provide much useful purpose.  Several small fires among the ruins provided a flitting backlight for the engineers who’d been sent forward to build redoubts for twenty rifles and two machine guns each[1] that were to provide pivot points for the holding of a prize the Germans were loath to relinquish.  Already, several counterattacks had been repulsed; each one heralded by a furious bombardment.  More were to come.

Isolated skirmishes in the preceding weeks had helped to gain advantageous start lines for a broad advance.  The Reserve Army, of which the Canadian Corps was part would provide and aggressive cover to the left flank of the main effort to be made by Fourth Army.[2]  Unlike the plan of attack which opened the Somme battle on 1 July; which had placed emphasis on the achievement of that day’s final objectives, experience influenced a shift in putting focus on primary targets with contingencies in place such that success could be exploited to gain subsequent objectives.  Here, then, was a first large scale implementation of a leap-frog style of attack which would come to be known as “bite and hold” tactics.  If the new line could be held, the men and officers of the Canadian Corps would have done a large part of proving the approach to defeating defensive stalemate was best done in incremental gains rather than setting sights on distant goals.

The 2nd Canadian Division would first move against German trenches nicknamed “Candy” and “Sugar” and then reduce the German strongpoints at the destroyed Sucerie, the beet refinery which leant much to the “sweet” codenames.  A thorough artillery bombardment on these lines would precede the infantry assault, but the real ingenuity of the day for the gunners would be in laying down a precisely timed “creeping barrage.”  Two batteries of 18 pounders would fire a specific programme designed to lift and shift trajectory and range in coordination with the infantry.  In the first few minutes the guns were to change from shelling fifty yards short of the German front line, to the front line itself, then lifting and increasing range one hundred yards each at two three minute intervals.[3]  All this would be done while maintaining a high rate of fire- four rounds per minute per gun-to create a protecting barrier for the infantry to move behind.

For the most part, it worked.  21st Battalion, on the left edge of the Corps’ front encountered very little resistance at first.  “No difficulty was experienced in taking 1st line trench as the artillery had thoroughly demolished this trench and killed most of the occupants.”[4]  Resistance was more stubborn beyond the front line, mainly from machine guns garrisoned around the ruined Sugar Factory.  “Our troops, however, knowing this to be well defended, attacked it with great vigour.”[5]   From Zero hour at 6.55 am, it was a little more than an hour before the message “Sugar Factory entirely in our hands”[6] was received at 2nd Division Headquarters from the 4th Canadian Infantry Brigade, and another hour more before all attacking battalions reported reaching their objectives.  This was a gain, across the Corps front 2200 yards wide of 400-1000 yards in depth.[7]

What had hoped to be of help in the attack, but turned out to be anticlimactic and largely 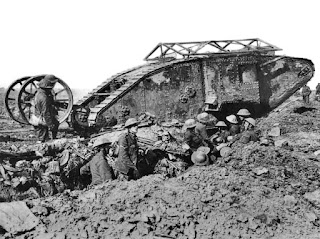 inconsequential was the first battlefield deployment of tanks.  Of the six Mark I Tanks from No. 1 Section, ‘C’ Company, Heavy Section Machine Gun Corps assigned to the 2nd Division’s attack, four became stuck or otherwise immobile on the way to their objectives.  The other two, No.’s 721 and 509 reached positions at the Sugar Factory, but only after the infantry had taken the objective.[8]  This sojourn would be helpful in improving future use, and it had an enormous psychological effect on both sides.  Attacking infantry were bolstered by the presence of these machines, while defenders were terrified.  No. 721, commanded by Captain Inglis took the surrender of more than fifty Germans.[9]  It was later reported to Major General Turner’s 2nd Division HQ that after a tank had gone astride a German trench and enfiladed it with heavy fire, a “prisoner’s opinion of Tanks say it is not war but bloody butchery.”[10]   General Turner’s own assessment was that of promise- what these weapons could become- as a possible vanguard to assisting the infantry by “increasing the enemy’s demoralization and keeping him on the run; thereby enabling units…to push well out in front and possibly into a further objective.”[11]  Turner’s superior, Corps Commander Lt General Julian Byng concurred on their potential, but cautioned that “No action of the infantry should ever be made subservient to that of the tanks.”[12]

This was rather academic on the day of battle, as by the point of Byng deciding to press his next set of objectives, there were no tanks capable of continuing.  4th Brigade’s quick and aggressive seizure of the Sugar Factory was echoed by similar victories for the main portion of the attack being made by Fourth Army.  At 11.00, General Byng issued orders to 2nd Division, that “Preparations will be made to exploit success already gained by a further advance of the Canadian Corps”[13] pushing towards Courcelette.  The 5th Canadian Infantry Brigade would pass through the morning’s gains; 25th (Nova Scotia Rifles) Battalion left, 22nd (French Canadian, aka “VanDoos”) Battalion right with 26th (New Brunswick) Battalion in close support, all behind another creeping barrage.  Needing time to organise and coordinate the infantry and artillery, as well as allowing for 3rd British Corps to secure a flank at Martinpuich[14] meant that 5th Brigade couldn’t go into action before six that evening.  In the meantime, 2nd Division was receiving conflicting reports on enemy strength at the village.  One had indicated the Germans were massing at Courcelette, while another, sent shortly afterward estimated it was only being held by light rearguards and snipers.[15]

“At 6.15,” the VanDoo’s War Diary states, “assault launched.”  Brevity of this report matches the swiftness of the action.  “The 22nd Battalion, after a sharp fight of 10 minutes, during which the bayonet was freely used, arrived at their objectives at 6.45 pm.”[16]  The VanDoos secured the north east end of Courcelette by seven, immediately consolidating their new position. 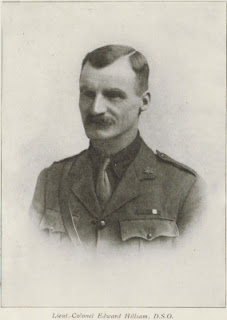 Lt. Colonel Edward Hilliam, O.C. 25th Battalion advancing on the left of the VanDoos would later submit a handwritten report on his unit in battle. “We moved 2000 (yards)….under heavy artillery fire…and not a single hitch.”[17]  They, too gained their objective “after a sharp bayonet fight of 5 minutes,”[18] making their objective at 6.25 pm.  Fighting may have been brief, but it was costly.  “All the officers of B and C Coy’s,” says Hilliam, “were killed or wounded excepting Lieut. De Young of ‘B’ Coy (since wounded) and Lt. Matheson, ‘C’ Coy.  These two boys, that is all they are, were so excellent that I am sending their names in later.”[19]  Colonel Hilliam was true to his word.  Lt.’s De Young; (whose left arm had been fractured by a machine gun bullet), and Matheson would both receive the Military Cross for their conspicuous gallantry on the day.  While extolling his men -“young soldiers behaving like veterans, going through a very heavy artillery barrage without a quiver”[20]- for their courage and dedication, modesty seems to disallow Hilliam mentioning that he was also wounded during the attack.  Despite this, he remained with his battalion.

During the night, counterattacks came, were repulsed, only to come on again.  Shelling was intense; the night sky lit by the flare of explosions, signal rockets of arranged colours showing green and red
to alert men miles away to bring their guns to action.  Smaller affairs, the rending crunch of bombs and grenades were followed by screams and curses, all punctuated by tongues of hot flame, winking out of blackness, the flicker of flashing rifle fire.  Men of the 5th Brigade held firm; they would not be driven off.  Using the 26th Battalion as a “flying squad” to reinforce gaps in the tine to drive off several strong patrols and bombing attacks, the 25th and 22nd remained stalwart in their new line, absorbing a total of seventeen separate attempts by the Germans to re-take Courcelette between 15-17 September.  Within those days, in which “no other Canadian ever defended against such a sustained fury of attacks during the war,”[21] the 22nd Battalion suffered 207 casualties, the 25th 222, and the 26th 224.[22]  Tenacity won out, and Courcelette remained in Canadian Hands.[i] 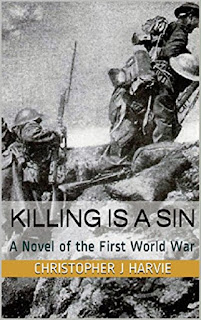 
[i] All Primary Sources Cited, and Information Used to Construct this Article is due to the courtesy of Library and Archives Canada.
Posted by Christopher J Harvie at 06:43