Actions at the Somme, Early September 1916

“The Commander-in-Chief has asked the Corps Commander to convey his heartiest congratulations to all ranks, 2nd Batt’n on their achievement this afternoon.”
-Field Message to 1st Canadian Division from Canadian Corps’ Headquarters,
9 September 1916[1] 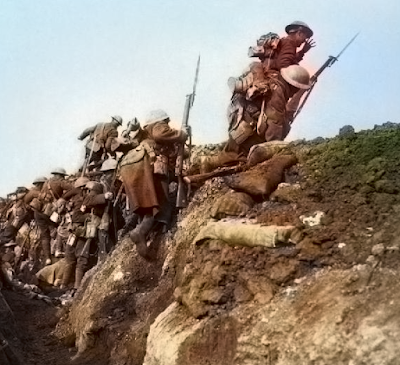 Acting Corporal Leo Clarke had been given orders to lead his section in clearing out towards the left extremity of the German trenches which 2nd Battalion had just taken.  Once there, his section was to provide cover for Sergeant Nicholl’s group from the battalion’s Bombing Platoon, tasked to create a blocking position to protect the flank of the newly won ground.  Corporal Clarke had a small problem with the job he’d been given.  By the time the objective had been reached, he didn’t have a section left.  They’d either been killed or wounded proceeding down the trench; the fighting to get through between narrow walls had been nasty, close, hand-to-hand murder.  Clarke’s section had used up their Mills bombs in the getting there, and all he had to defend his stand was his Webley revolver.  With no one left able to help him, Corporal Clarke carried on as best he could to create a decent fighting position, putting a barricade together with what he had on hand.  A counterattack could be moments away.

So far, the enemy had shown an unexpected resilience.  Just at the hour of 2nd Battalion’s attack, Canadian Corps had received a telling report on German prisoners captured earlier that afternoon: “Two deserters came over to 1st Bde…two hours ago.  They came back (from a transfer to the Eastern Front) and have been two days in front line….In this man’s company, there were 7 killed and 6 wounded this morning, 50 casualties last night…..The battalion had a very bad time in the trenches, and in another 24 hours they would not be very much good for further fighting.”[2]  This only seemed to corroborate a similar report forwarded to Reserve Army from Canadian Corps that morning.  The previous day, “Two Germans surrendered about midnight and report enemy very nervous and fearing an attack.”[3]  If this intelligence could be trusted (it wasn’t unknown to send “deserters” across the line to sow disinformation), Haig’s “wearing out battle”[4] was having its desired effect.  Months of keeping pressure on the Germans here at the Somme seemed to be syphoning strength and moral will.  Another concerted effort across a wide front; a general offensive in the works for mid-September, just might punch though a thinned crust of resistance and open the war up, at last. 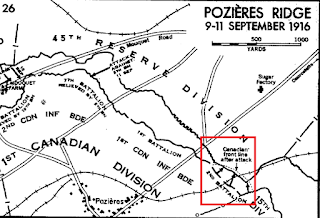 Before such a large scale effort could go ahead, several small, very limited positional battles would be required to shake out and even up the proposed start line.  This meant sorting out the mesh of trenchlines which were the result of the summer’s assaults and counterattacks.  Portions of the German front line created spurs which would pose a problem with a broad axis of advance in keeping touch with flanking units.  One such hitch was a thorn at the divide between the British VI Corps and the Canadians.  A hasty attack to gain this portion of the German line, isolating it and then incorporating it into the British line would be of vital importance to upcoming operations.  The frontage to be attacked was fairly narrow.  A single, determined battalion with its companies advancing in waves was considered adequate to the task.  Conceived and confirmed only hours before it was set to occur, the orders were delivered to 2nd Battalion out of trenches in 1st Brigade reserve on the evening of 8 September.  On the morning of the 9th, the battalion would relieve at the front line and be prepared to go into action at quarter to five that afternoon.[5]

“Relief completed 1.25 pm,” the Battalion War Diary states, “Companies moved into position preparatory to attack.”[6]  Specially built “jumping off” trenches had been dug slightly forward of the main line, and here the assaulting waves sheltered, bayonets fixed, waiting for the tremendous covering barrage which would signal them to advance. 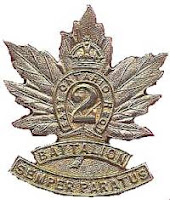 2nd (East Ontario) Canadian Infantry Battalion was one of the Corps’ most veteran units.  Part of the First Contingent raised at the onset of the war in 1914, the battalion had been in France, at every major engagement experienced by Canada’s young army since February 1915.[7]  By this point, few of its number were from the Battalion’s origin.  Many were reinforcements who’d come along since, including Corporal Clarke who’d finagled a transfer to 2nd Battalion so he might serve alongside his brother.[8] 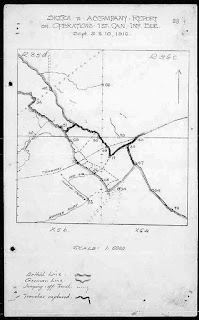 Zero hour, 4.45 pm, the “barrage opened, men leapt over the parapet.”[9]  There was nearly two hundred yards of no-man’s land to cross before reaching the German line, and initially it seemed that little effort was made in stopping them.  Companies on the right flank gained lodgement without losing a man, linking up with VI Corps’ men from 15 (Scottish) Division a few minutes past five o’clock.  Along the left edge, Jerry proved more stubborn.  Before they could storm the trench, “men were held up for a few minutes by heavy machine gun fire.”[10]  In what was later described by a witness as “the bravest thing I ever saw,” Lieutenant J P Pringle charged the machine gun on his own, “and killed the crew with his revolver.”[11]  Lt. Pringle was fatally wounded in the act, but his sacrifice allowed the attack to proceed.  This unnamed witness and “Ontario officer” quoted in the Grand Prairie Herald eulogised him by stating Lt. Pringle “knew the danger he faced when he made his dash, but he was built of the stock that would give his life without hesitation.”[12]  With the machine gun out of action, the left trench could be seized.  By 5.08 pm, 2nd Battalion held their objectives, the situation reported by the attack commander, Major Vanderwater was “well in hand.”[13]  His artillery Forward Observing Officer would have a working telephone line to Divisional guns enabling on call support before six o’clock.[14]  All that remained was to secure the flanks and create the blocking positions and bombing posts which were the responsibility of the Battalion Bombing Platoon.[15]

It was imperative to the success of future operations that this German trench be held at all cost.  Every man in the attacking force would have had that impressed upon him, which lends reason to why Corporal Clarke remained where he was, alone and lightly armed at the extreme left of his battalion.  He wasn’t alone for long, but not in a good way.  Some twenty Germans, led by two officers were filing down this section of trench, directly towards him, intent on pushing the flank.  Clarke’s actions were astounding, immediate and personally reckless; but also absolutely correct.  Without hesitation, he advanced towards the enemy, firing his pistol as he went, having no shortage of targets in the trench’s confines.  When his Webley was emptied, he then took up a discarded German rifle, and continued forward, still firing.  One of the officers engaged at bayonet point, scoring touch on Clarke’s thigh, who quickly shot him dead in return.  Clarke then fetched up another Mauser, running through that rifle’s magazine as well, now having turned the enemy around, fleeing in panic by the way they had come.  Reloading his revolver, he dispatched four of the five Germans attempting to escape, making a prisoner of the fifth.  Corporal Clarke was personally credited with killing eighteen of the enemy, and single-handedly holding the crucial left flank.

These actions would be deemed worthy of the British Empire’s highest decoration, the Victoria Cross.  Clarke’s award would be one of three earned by men who’d lived at Pine Street, Winnipeg- which would be renamed “Valour Road” in honour of the trio.[16]

Corporal Clarke would never know of his award.  Before it was announced, Leo Clarke died of internal bleeding after being buried by shellfire in October.[17][i] 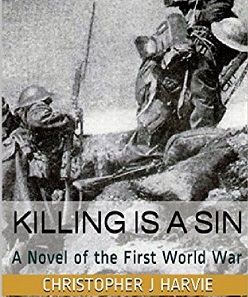 My premier work of fiction,

“Killing is a Sin: A Novel of the First World War”

is now available for download through
Kindle Direct Publishing.