Their Glory Shall Not Be Blotted Out

What had begun as a search to find information on one soldier unfolded to reveal a story forever connecting three individuals.

As a sample set, the three were, by most measurements, a representation of the average Canadian soldier on the Western Front.  None of the three had been born in Canada; which was certainly not unusual.  Kirby Bourson Hunt was from Bona Vista Newfoundland, then a Dominion separate from Canada; Thomas Culbert was Belfast born and George Holland came from Worsley, England.  They aged between twenty and twenty-seven years old and ranged in height from 5’3” to 5’11”- both in age and stature they were outstandingly average.  They were ordinary men, all three private soldiers who neither had conspicuous merit nor detraction applied to their service.  As best as can be told, the three men, Holland, Culbert and Hunt had never met or were known to one another, they had all served in different battalions and had been in France for different lengths of time.

Thomas Culbert was posted to the 38th Battalion on 6 December, 1916 and George Holland reported to the 78th Battalion two days before Christmas.  These two men came to 4th Canadian Division units to reinforce losses taken in the waning phase of the Somme campaign.  There was a great need to make up numbers from casualties taken, as the long training and organisational effort for the spring offensives-for Vimy Ridge- was about to begin.  Urgency to get men proficient in their trade is evident in Culbert’s posting to a Lewis Gun Course not two weeks after joining his unit.  Hunt, the last of these three to come to the front was taken on strength with the 47th Battalion in May of 1917, in his own turn a reinforcement for the casualties taken in the battle for which Holland and Culbert had been brought over for.

However, only Holland was present with his unit at Vimy, Culbert had been wounded in February; and it is at this point where I began.

Thomas Culbert is a direct relative of a fellow I went to school with.  This friend had posted newspaper clippings regarding Culbert over Remembrance Week.  From the Toronto Star, it began “Pte. Thomas Culbert, who in February last was severely wounded in the right thigh is to-day reported to have died of his injuries.”[1]  He had died on the 24th of June, and was buried in France.  This struck me as out of the ordinary.  Worded in this way, the clipping made it appear as though his death in June was directly resulting from his wounding in February.  It seemed a terribly lengthy time to linger from a leg wound, and that Culbert was buried in France raised more questions.  Mainly, why hadn’t he been evacuated to England as was most usually the case for convalescence?  Circumstances as they seemed were not impossible, just incredibly unlikely.  It was not much more than a hunch which motivated me, and once I opened Culbert’s service records, my hunch was confirmed.

He was indeed wounded in February.  His file states “GSW (Gun Shot Wound) Rt. Thigh, slight”[2] on his admission to hospital on 26 February.  The 38th Battalion War Diary provided the context: “At 5.30 pm a raid on German trenches was made by five officers and 85 other ranks….Results 38 Bn.: 1. Thirty-three dead Huns were counted.  2. Six dug-outs were bombed.  3. Estimated that the enemy sustained at least forty other casualties besides the above dead. 4. Enemy’s wire practically nil. Trenches in bad condition….Our casualties- 4 killed, 27 wounded.”[3]

Culbert recovered from this wound, returning to his unit on the 13th of April, just missing the opening phase of Vimy Ridge.  Discovering this only solved part of the mystery; in that he didn’t linger for four months.  His death, however, was listed as “died of wounds” which meant there was a period of time in which he suffered injuries before passing.  Consulting the Commonwealth War Graves Commission records and comparing those with reports from 12 Canadian Infantry Brigade (to which the 38th Battalion belonged) made the situation clearer.  Colonel Nicholson’s official history notes that this period, from the end of the first phase of the Battle of Messines was one in which Haig, planning for a resumed offensive had instructed his subordinate commands to “ ‘hold the enemy to his ground, and prevent his moving troops elsewhere’.”[4]

The lines were being stabilised, and strengthened in preparation for the next forward move.  Artillery fire was intense on both sides. On the 18th of June, German artillery was “considerably above normal….Shortly before mdt. In response to flares sent up…approx. 175 shells were fired.”[5] The majority of these fell amongst the positions held by the 38th Battalion. Pte. George Holland, his 78th Battalion out of the line, was that evening part of a working party sent forward which got caught in this heavy fire. “Following casualties amongst party furnished by ‘D’ Coy; Killed 2, 874700 Pte. Holland, 625235 Pte. Miller, buried same time….4 wounded (slightly) all by HTMB (Heavy Trench Mortar Bomb).”[6]  12 Brigade’s diary records these casualties of the 78th, and two men wounded from the 38th.  All of the wounded would have been brought through the Regimental Aid Post, just behind the trench line, and thence to the Advance Dressing Station, which was just on the eastern periphery of Givenchy.  From the ADS men would either be treated and discharged, or transported to a Main Dressing Station or other hospital facilities further rearward.  In extreme cases, those men not expected to survive were made comfortable where they were rather than subject them to unnecessary movement.  Thomas Culbert, married father of two, never made it beyond the ADS, although death came a slow, terrible six days later.

On the 20th of June, 12 Brigade was replaced in line by 10 Canadian Infantry Brigade, whose battalions now took up the job of fixing the enemy in place.  It was a few days later, overnight between 25/26 June that the 47th Battalion conducted a minor operation against lightly held German trenches and a sweep of the village of La Coulotte.  “Patrols were pushed through the village of LA COULOTTE as far south to the LENS-ARRAS ROAD, and found the Southern part of the village still strongly occupied.”[7] The patrol from the 47th retired to friendly lines, but not before suffering casualties of two dead and fourteen wounded. One of those killed was Kirby Hunt.  He had been at the front just over five weeks.  His body was brought to the ADS, as were the bodies of Holland and Miller from their temporary grave along the support line.

Holland, Culbert and Hunt were interred in a group plot at a place called Sumach Cemetery.[8]  Group burials were not uncommon, and great effort was taken to ensure these burials were identifiable. Only later- mostly through a tremendous post-war program- would the men be exhumed and placed in single graves within established grounds and marked with proper headstones. 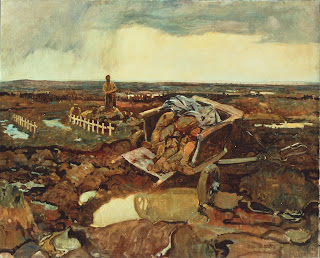 Except, in this case, Sumach Cemetery was destroyed in later fighting to such an extent that when La Chaudière Cemetery was being constructed after the war, those initially buried at Sumach could not be individually distinguished.  These men are commemorated at La Chaudière by a special memorial.  The three; Holland, Culbert and Hunt, men who didn’t know each other, ordinary average men, will now pass eternity together, with so many of their comrades, marked by a stone which offers the promise “Their Glory Shall Not Be Blotted Out.”