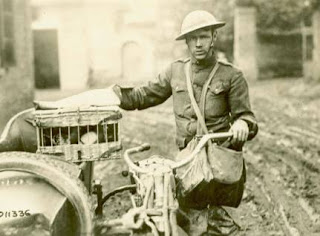 In thinking on that, I'm reminded of the aphorism that "no plan ever survives the first contact."  It's a good reminder to have contingent options available; that one's plans should never be too rigid and allow for some flexibility.  Of course, get me started thinking about military analogies and I could go on.  In this case, I was just last week caught up in a bitter fight with my mobile phone provider.  I had switched to this company after finally being fed up with the other.  Initially, I was very pleased with the deal.  Just a little more per month for service, but a lot more options, a better phone wider coverage and more flexibility.  The phone itself, though, turned out to be defective and from Tuesday on until Friday over multiple attempts I was finally offered a solution that I found satisfactory.  The difficulty is that mobile phone companies have set their policies so rigidly that they have no ability to make exceptions, even when they want to, and in my opinion really should.  The process was exhausting.  The upshot is that until I receive the replacement phone, I'm considerably out of the loop.  I feel lost and disconnected in such a way that would have been impossible to imagine not ten years ago; and I arrived late to the cellphone party.

I've spoken in a fashion about methods of media communication in Messages of War, but I haven't much discussed the importance of military communications.  Which in itself is a heck of an oversight being that I'm a former radio operator.  Lines of communication are absolutely crucial to the conduct of battle, and have been so always.  Sun Tzu makes several mentions of using flags, drums and horns for methods of signalling, our own traditional reverence for "colours" (read military flags) comes from the period in time when it was crucial to keep them flying and visible to help organise men in the thick smoke that black powder battles created.  In Wellington's day, it might well have been possible for the Iron Duke to be in visual contact with his regiments, at the very least by their colours.  Should he need to send a message, a rider could be out and back in short order.

Advance time on a century and things had changed a great deal.  Mostly we can ascribe culpability to technological advances, but what needs to be taken into account is the sheer scale of the First World War in numbers of men.  Britain especially struggled with this as her pre-war army was designed to be a small professional force for colonial administration.  To fight a European war would require her to grow in size beyond anybody's first estimation, and operate in organisational sizes (Corps, Armies) and structures it had no practice with.  Now a headquarters was responsible for directing battles for elements its commander couldn't possibly see all at once even if lines of visibility allowed.  The trenches and the stagnant nature of defensive warfare allowed for the establishment of incredibly complex telephone networks between the front, headquarters and the artillery on the gun line, by and large bringing effective and timely communication between elements.  The wires were delicate and easily cut by shrapnel.  Teams of signalmen were employed full time in finding and repairing damage to the wiring, often "laddering" cables with multiple connections so that one blast might not knock out the 'phones.  When in one place, a wired network is acceptable, but an army will need to advance sooner or later.

To their credit, signallers would try to bring telephones and cables forward during an attack, but it was usually better to wait until a position had been consolidated before doing so.  In the meantime, in the heat of battle, there were only more traditional methods to rely upon.  Some units may have had pigeons or even dogs to take messages back to the rear; most would rely on the runner to facilitate communications.  It is in that where a lot of things can go wrong.

A runner or dispatch rider can only carry the message as fast as he can run or ride; and that's not taking into account the conditions of the ground over which he must travel.  Each message, whether to confirm a taken objective or to ask for further instructions has a longer way to go the higher up the chain it has to get.  The delay could be several minutes at the least, when several seconds may be too much time before the situation changes.  The opportunity for misunderstanding the situation using this form of communication is rife, one example which comes to mind is the breakdown during Second Ypres in which fighting units of the 3d Canadian Brigade didn't receive the orders from their commander to fall back to a defensive line around Brigade headquarters.  That they didn't do this was fine as the situation was such that General Turner believed his command to be in a more dire situation than it was.  Not having instantaneous communication with higher headquarters also meant that artillery couldn't be used on demand.  There were pre-arranged signals using coloured flares to call shelling down on established targets, but most bombardments were planned in advance and fairly inflexible once begun.

The nature of communication and the fluidity of the situation on the firing line necessitated some solution so that commanders who by necessity had to be well back from the front could better control their men in the field.  Setting limited, shorter to reach objectives and moving units through in a leap-frog fashion meant that units fighting were in close contact from time to time with units coming in from the rear; hopefully with news or updated orders.  The other solution was to give more autonomy to junior officers, and encourage initiative; allowing company commanders and platoon leaders to deploy their men as the situation they saw (and their commanders couldn't) dictated.  It wouldn't be for another generation that wireless communication would be reliable or portable enough to go into the field.  It's not a great leap of logic to understand that the military's need for instantaneous communications has led us to the point where we panic each time we leave the house without our phones. Remember, it's up to all of us to get this project to its objective.  I've sent a news release to some media contacts in hopes of generating publicity, and informing our social networks will get the word out.  Contributions to the project can be made through IndieGoGo.  We really don't need much to get started, but it would be nice to reach our $1000 goal quickly so that we can make donations of anything we receive beyond that reserve.

Let people know that we are on Facebook and Twitter.  We still need a volunteer with some artistic skill to help out with our new logo, and to take a crack at improving our promotional video.  If you think you can help, or if you have any ideas, thoughts, suggestions or questions, post them here.

I shall see you all (and hopefully more) tomorrow!
Posted by Christopher J Harvie at 05:03