It speaks to the long road we've yet to go as far as audience growth when I can take a weekend off and it escapes notice.  Operation AMPLIFY is still in effect, and running until 31January 2012.  We've got that amount of time to drive our audience into the thousands and hopefully collect enough voluntary contributions to register the business and move ahead to achieve the goals of this project as a not-for-profit.  Fortunately, some of the new audience members and Twitter followers we've gained are great additions to the professional network "If Ye Break Faith" is establishing; but I will admit to getting discouraged by the slowness of growth, and the complete dearth of contributions to our IndieGoGo project funding page.  The other part that discourages me is that I want this space to become a bit more interactive than it is now, and I've yet to experience any great level of feedback or participation from my readers.

Is this work even worth continuing?  The goals are worth striving for to be sure; furthering the education of history, preserving the records and artefacts of our past, and giving support to our veterans, interconnected by the means of using the First World War as our focus subject.  I'd like to know your thoughts.  Where am I falling short, and where am I meeting expectation?  Is there a blind spot to the success of this project that I fail to see?  Is there anything in particular you would like me to explore in an essay, or a cause which falls within our mandate that we can help support through this space? Questions, comments, suggestions, complaints should be forwarded to ifyebreakfaith@gmail.com.  We can also be found on Facebook.  Feel free to post relevant links on our page; some of you have already done so, but I'd really like to see more.


I've been re-watching the 1964 tri-national (UK, Canadian, Australian) production "The Great War".  I've not had it to hand for very long, and already I'm nearly through the whole twenty-odd episode series twice over.  It's difficult to find a good documentary that covers the history of the entire war, and this one is the best of the ones I've seen.  What it brings to mind is in the telling of a story on film, one has to have compelling images to work with.  It is quite remarkable to realise that almost all of the "combat footage" in this series, and in fact in most films and television projects documenting war is largely recreated.  Even to such a psychological level as having the Allies for the most part moving from left to right on screen and the Germans right to left (even if the film negative has to be reversed to do so) so that in our minds eye the Allies are headed east and the Germans west.  One can excuse the lack of genuine front line footage from the First World War, as the technology was new, heavy and cumbersome.  The medium of film was so novel and popular that as soon as was possible the public was being informed on the war through moving pictures.  It hadn't been quite fifty years since the public had seen the first still photographs of war, via the American Civil War, and the appetite for the public to know what a war looked like had just been whetted.

The difficulty that arises is that, due to technology being new to film genuine scenes of action was not always possible, and perhaps most importantly, the public couldn't be shown the whole story.  I've gone over very briefly about press censorship during the war, and the intent was very clear.  The public must be given only the information they need to continue to support their government in pursuing the war.  A civil mind by its nature does not understand the martial, and cannot empathise with the way in which the military operates or the true face of war.  The images the home population were to consume in picture houses would be tailor made to evoke just the right kind of emotive response, and no other. 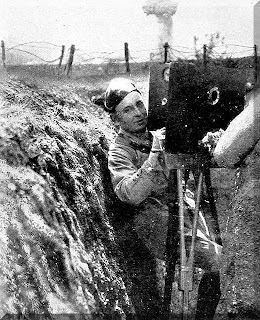 There then becomes a delicate balance.  It is one in which the public are given the media they wish to see, as close as to the truth as is dared, but not so that the message intended is lost.  As the century unfolded, and our ability to communicate with audio and film improved; as well as the speed at which these ideas could be disseminated, the ability for the government to exercise tight control of the media lessened.  By the late 1960's, daily televised broadcasts, mainly from Indochina were shocking an uninitiated public with uncut spontaneous film of combat actions.  What this did, for the very first time was prove Erasmus' thought: "War is more delightful to those who have never experienced it."  The experience may have been quite vicarious, but the daily dose of difficult images played a large part in developing American public opinion against their government's decision to deploy into Vietnam.

I won't discuss the politics of going to war here.  The point I wish to make is that even though in this day and age we may be able to see unedited footage of war, it is something I believe we are not meant to see.  By and large, the civil mind does not understand war.  It wants to, desires to know, but cannot unless the experience is first hand.  Feeding the appetite for the public to view war does not equate understanding, which is the most important thing.  If we all understood war as well as those who have seen it do, we might not have so much of them.
Posted by Christopher J Harvie at 05:54