A Wide Reaching and Lasting Influence

I began yesterday's column calling out for a more open format for this space.  Already, some of you have begun posting relevant links on our Facebook Page, about which I am quite pleased, and look forward to seeing more.  It is not just the numerical increase in audience that Operation AMPLIFY has set out to achieve, but a more responsive audience overall (as well as the secondary goal of meeting our funding needs, see our campaign at IndieGoGo.)  So, towards a desire to engage in this responsive fashion, I'm once again making an adjustment to our format.  Going forward, beginning today, I will introduce on Tuesdays a discussion topic open to all to comment, debate or opine upon. 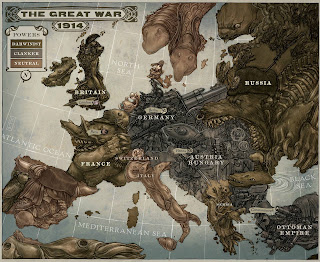 The first of these is a big one:  The four years encompassing the First World War is a period of time far more influential than any other event over the same amount of time in human history.

The war, either directly or indirectly contributed to a vast amount of social, political, and economic changes which not only shaped the immediate period contemporary to the war, but well beyond and in some instances is still felt today and will be so well into the future.  Some of these items are: The beginning of the end of Colonial Imperialism (a process which is still under way) and the start of a shift to Corporate Imperialism; The collapse of the last absolute monarchic powers in Europe; inception of Communism as a practical system of government as opposed to a thought experiment philosophy; emergence of the United States as a world power, and the decline of Britain from this position; technological advances and improvements made as a necessity of war; the arbitrary division of the Middle East into nation-states; the empowerment of women; it perpetuated in its immediate wake a series of global economic booms and crises such as never experienced in scale and duration, and one other example that comes to mind.

Which is, of course, the poorly enacted and ambiguous peace which left the door open for the events of the Second World War.

So, why is it that WWI is not more widely regarded as the most influential period in human history?  Why is it that I expect to have many comments taking an opposite view as mine?  It is this:  We have been long sold on the notion that the war is a mistake of history, a preventable error which did nothing but destroy life and waste money.  It is only the inconclusiveness of the peace which lead to the Second World War that usually has any cause to claim historical influence.  That we can pigeon-hole the Second World War along more definitive lines of "good v. evil" is partly due to the nature of the conflict itself, it's clear ending in Allied victory and being more recent takes some of the thunder away from the study of the influence of the First. 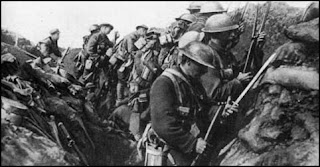 A far more accurate assessment in my opinion is that there is only one World War, fought with a rather long "time-out" period in-between open hostilities.  Agree or disagree, I leave it up to you.  Post your opinions and arguments in the comments section below, or to ifyebreakfaith@gmail.com.  We will revisit your submissions to this discussion next Tuesday, before introducing the next discussion topic (if you have a suggestion for that, send us your ideas.)
Posted by Christopher J Harvie at 05:00