I'd like to express my gratitude for all of your patience last week as I was preoccupied with yet another frustrating confrontation with my internet provider.  Wind Mobile seems to have far too many policies in effect which enable them to not deliver services paid for.  The upshot is they acquiesced (only after threatening them with the Better Business Bureau) and I have service well into March.  Shame on me if I fail to engage another, more reliable provider by that point.

On to some good news.  I've recently heard about Leadership Grants, a group designed to financially assist new and emerging small businesses, including ones geared to Not-for-Profit.  They make a review of submissions in April, so I've got a little time to put a solid business plan and proposal together.  It's just this kind of jump start that can get "If Ye Break Faith" under weigh.  It wouldn't be possible if there weren't people like you reading my work and supporting the ideals this project represents.  We're coming up on some interesting times real soon, so if you haven't, please follow along with us on Twitter and Facebook to keep up to date on things as they develop. 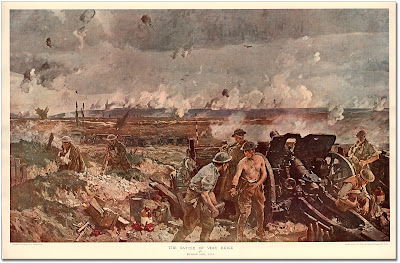 Not having tools, I've had a neighbour help to drive some screws to hang my paintings.  I'm grateful for that as now the print of "The Battle of Vimy Ridge" by Richard Jack is finally up on my wall.  It's taken a while because I'm generally not that handy; which is why I didn't join the Engineers.  I'm certainly glad of them, though.  Armies have used the asset of skilled labour since the dawn of warfare.  They built siege engines, forded rivers, prepared winter camps.  When taking a castle under siege, the engineers were responsible for digging ditches to approach the foundation under cover to attempt to breach the wall.  These ditches were called saps, and is why engineers today take pride in the title "Sapper."

There was no short need for engineers during the First World War.  Countries at a crescendo of the Industrial Revolution were waging an industrial conflict against the other.  Under expected circumstances engineers would have been called to keep lines of supply and transportation open.  Often supplemented by surplus labour from infantry units "at rest", they would build roads and lay rail line.  The war as it happened solidified into an extension of siege warfare from an age gone by giving opportunity for the engineers to be utilized to their fullest.

Trench systems, though begun at opportunity, must become well organised to provide protection for the troops and be as defensible a position as possible.  Engineers would have been responsible for designing trench layout and troubleshooting building issues like the high drainage in Flanders where a complex system of pumps and drains were needed to keep trenches dry.

It occurred at some level that frontal attack without adequate reduction of the enemy position prior to jumping off was just not on.  While the artillery went through it's own remarkable learning curve through the war to deliver death from above, some very special engineers were put to the task to deliver death from below.

It is difficult to remember a world that ran on coal, but the turn of the last century was an age yet to really come to terms with the potential of petroleum.  Many young men who left for the war came up from the mines only for many of them to wind up back down in them. 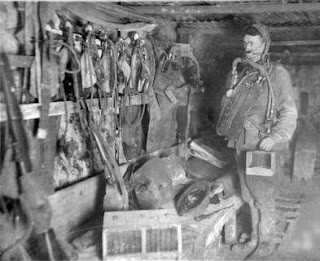 The purpose was to sink a shaft from friendly lines, tunnel towards enemy trenches, and clear a large gallery below a predetermined point.  The gallery would be packed with the high explosive ammonal and linked to an electronic charge for detonation at the right moment before an attack.  The mining was just as physically dangerous as going down a seam back home.  There was risk of collapse, ventilation problems, and, in Flanders, flooding.  Civil miners would have had some experience with explosives, but hardly on the scale they were called to in the war.  That, and the enemy was attempting the exact same thing.  The war underground escalated and developed in it's own way, much as the rest of the war shifted as the next ingenuity conferred advantage to the first side to use it.

Now tunnels were not only being built to destroy trenches, but to listen for and intercept enemy mines.  Weapons and equipment designed or modified to work best in cramped and dark conditions were quickly adopted.  At the same time, the method of how the tunnels were dug lent exclusively to the skills and technique of those most familiar with the work.

It becomes difficult to imagine.  As I said, I'm not that handy in the first place, and couldn't bear to be enclosed underground even in the best of circumstances.  Nor could I, for that matter, imagine the feeling of standing on a fire step, looking out into no-man's-land, never entirely certain that there wasn't several tonnes of explosive directly underneath me waiting for the word "go" to vapourise the immediate surrounding area.

And perhaps that's a good exercise for today.  Let's try to imagine what that must feel like.  There's no certainty of knowing, but an attempt at empathy will help keep current what immense sacrifices were made.


Posted by Christopher J Harvie at 04:40