It has been far longer than I had hoped between my last essay and this one.  I'd like to thank you all for sticking with me through this little rough patch; particularly those of you whom have followed me recently despite lack of addition of new content.  Both the Facebook Page and Twitter Feed for this work remain active, so please check them out and follow along to show your support.

Just what is it that I'm encouraging you to support, you ask?  "If Ye Break Faith" is many things.  Right now it's not much more than a showcase for an enthusiastic amateur historian keen on building his portfolio and expressing thoughts on the First World War.  "If Ye Break Faith" does have the potential to move beyond this and take on the mantle of a Not for Profit group dedicated to the cause of continual and analytical historical education.  We're a long way off from that.

On that note, I'd like to state that efforts on my part to expand the audience; a crucial step in moving this work forward, have not gone to plan.  As the plan was flawed, I'm not disappointed with the result.  I don't wish to force this project into a wider scope before it's ready and I still enjoy the grassroots effect of accepting new readers in a trickle rather than a flow.  The project retains an air of person-ability more so in this fashion than wanting to reach thousands at one go.  It will happen, just not yet; and I'd rather it come naturally than by coercion. 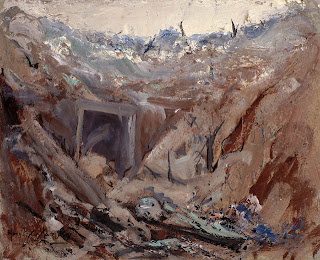 When I say that "If Ye Break Faith" wishes to propagate historical education, I stand firm in the camp which believes that our current approach on the most part is incorrect.  The difficulty is that as history tells our stories of the past, it is nigh-on impossible to treat any study of the past without subjectivity.  The danger in this is any dissemination of fact not taken as objectively as possible risks losing a great part of what we might be able to learn.  The tautology is that in order to understand our present and be best prepared for the future, we should be incorporating the lessons history has given us.

If we, though, cling to bias on national, personal or creedal lines we fail to gain a complete understanding.  My thought is:  What we don't understand, we fear.  What we fear, we hate.  In order not to succumb to hatred we therefore must understand as much and as completely as possible.  Divesting ourselves of bias and prejudice in historical study would go a long way to rectifying cultural understanding.

It is not an easy task.  Looking at my library, I can point to any number of well written and researched books by prominent authors.  I continually use them for reference or read them for enjoyment.  However, most of these books treat the subject matter far more subjectively than otherwise; mainly a pro-British (and Empire) bias which can tend to overlook aspects which might influence thought otherwise.  At the very least, they do nothing to disabuse us of long held perceptions of our past rooted more in emotional ties than removed observation.  Two of my least popular posts, "Taking the Ridge" and "Over There" stand as proof that expressing ideas contrary to popular perception are not well received.  Books I have to hand which treat the subject with objectivity or set out to purposely disassemble preconceived notions are among the least popular and controversial titles I own; and even among those cultural and natural bias on the part of the author are still present.

I've engaged in debate with my peers on this topic, many of whom claim no qualms with history as it is studied today and has been studied throughout.  Some recognize the validity of my argument but maintain that emotionally removing oneself to view events objectively is just not possible.  I'd like to challenge that, with one sentence. 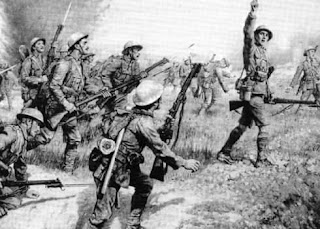 The first of July, 1916.  What did that inspire you to think about?  Perhaps the "Flower of British Youth" sent forward with cheerful naivete into an impossible attack by uncaring generals ignorant of the way in which war had changed and unaware of the conditions at the front.  How many of you accounted the overall situation of the war, Western Front and beyond which dictated the time and place of the British offensive at the Somme?  Haig had wished to attack in Flanders that spring but was held to obligations to directly support his French allies, necessitating an attack further south on ground unfamiliar to commanders and front line troops alike.  Working with undertrained assets of the New Armies, the offensive was slated to begin much later but the French drain on manpower due to the siege at Verdun dictated the British attack sooner rather than later.  Not to mention, of course, the actual returns of the day.  The rate of British units achieving their objectives on the first day may not have been stellar, but would probably stand to surprise a great many.

We hear "Sixty-thousand casualties", "Absolute slaughter", "Lost generation" and other evocative statements so often that is becomes a difficult task to divorce ourselves from an emotive response.  I'm guilty of it as well, but as much to be gained by attaching our emotional sensibilities to history, so much more is lost in lack of thoroughness.  Going forward, I hope I can deliver on my desire to take as wide and all-encompassing view as is possible.  There is so much more to learn that way.

I'd like to hear your thoughts on this, or any other subject I've touched upon.  Please post responses, questions or comments in the section below, via Facebook or Twitter, or by email to ifyebreakfaith@gmail.com.


Posted by Christopher J Harvie at 03:50