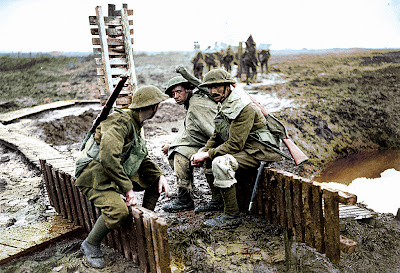 Hello, all.  I last left off in February with my announcement of gearing up If Ye Break Faith to become a niche publisher in order to best pursue our project goals. I don't like that there's been more than a month between updates; and you'll forgive me if real life gets in the way.  I wish I had the ability to focus on driving this work to where it needs to go, but I've been concerning myself with getting a paying job (another effort that I've had little recent success with) and keeping myself afloat with very tenuous and inadequate finances.  I've been despondent lately as I'm rather thin on the ground resource-wise and I feel as though I'm fighting a losing battle at times.

There is something which fills me with hope and keeps the desire to continue this work, which is despite the lack of new content, IYBF still attracts new followers.  Our audience has grown in the absence of me doing anything.  What this indicates to me is that people are finding this space and following it's development based on perceived merit.  First, thank you all for that unspoken compliment.  Second, I feel obligated (in a good way; not in a "my mum is making me do it" fashion) to provide something new, fresh and intriguing particularly for my new followers as well as those of you who have been here for a while.

IYBF is almost a year old, and in that time we've come from nothing to an audience in the hundreds with more than 10 000 unique hits.  Small potatoes as far as internet demographics are concerned, but I'm immensely proud of what we've accomplished in getting to this point.  Moving beyond will be difficult as the direction the project needs to go is really beyond my present ability in relation to both skill and resources.  Again, I'd like to solicit for any advice or expertise that could be given to push us in the right direction. 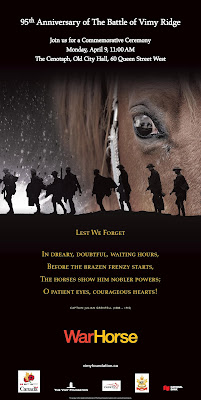 For those of you already following IYBF on Twitter and Facebook you may have already seen the dual announcement of  Mirvish Productions and stage director John Karastamatis presenting a short film festival and a commemorative ceremony to mark the anniversary of Vimy Ridge.  I encourage all of you in the Toronto area to participate in these events.

I'd also like to say something about our audience outside the Toronto area.  I get absolutely giddy when my site analytics tell me someone from a very distant country has read my work.  I love the dynamic of having an international following.  What pleases me most is that a disproportionate number are young people from Belgium.  That those who inherit the land over which so much was contested and proven about humanity still feel a strong connection to those events gives me hope of success with my desire to perpetuate the memory of our collective past. 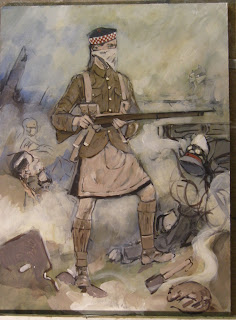 One friend of mine deserves special mention.  An artist and tour guide in Ypres, Soren Hawkes produces wonderful artistic tributes to those lost to war.  The portrait displayed here is titled "Canadians Never Budge", a tribute to the 15th Battalion's stand at Second Ypres, 1915.  His other work can be viewed and ordered at his site passchendaeleprints.com.  I really enjoy these prints, and the style is reminiscent of the work produced by A Y Jackson when the Group of Seven painter was employed as a war artist.  I would strongly recommend checking out Soren's works.

Monday, April 9th will mark the 95th anniversary of the Battle of Vimy Ridge.  By a remarkable coincidence it not only falls on a Monday,but an Easter Monday which it was in 1917 when the Canadian Corps went into battle complete at four divisions for the first time.  The ridge itself was a dominant geographic feature, and had been in German possession since the lines settled into the Western Front by the end of 1914.  Formidable on its own, the Germans ingeniously constructed up to four defensive lines along the crest and reverse slope with other works and fortifications mutually supportive and designed to deny the vital industrial area marked by the town of Lens.  As a dominating and threatening feature, the reduction of German presence at Vimy was a requisite to any attack made along the Ypres area of the front.  Previous attempts made by the French and British had been repulsed, with terrible loss.  With Haig planning an offensive at Arras for spring 1917, the need to take and hold this position was crucial.  Not only would it help open the way towards the capture of Lens; but the desire to hold the feature would fix German forces to the area, disallowing them to be shifted to meet the main British effort further south. 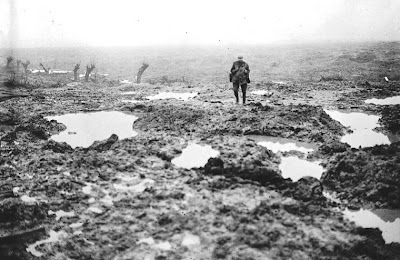 Great care was taken in the planning, preparation and training of the Canadian Corps to ensure a successful attack.  By 1917, the Corps was a decent mix of veteran troops and fresh replacements.  General Byng, commanding the Corps, took the opportunity time allowed to bring these men to the standard of British Regulars, concentrating on marksmanship and field manoeuvring.  For the first time since the BEF was shattered at Mons in 1914, troops would be capable of performing complex moves such as the leap-frogging "fire and movement" tactics which had gone by the wayside early in the war because the citizen soldiers of the New Armies hadn't time to learn it. 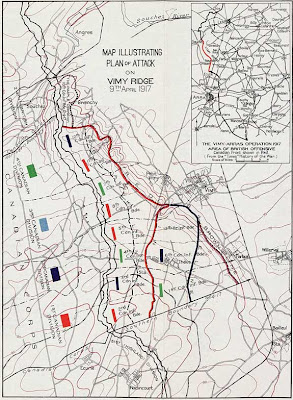 To this was added the new science of flash and sound spotting, a bit of trigonometric alchemy which allowed counter-battery artillery to find and eliminate enemy guns.  To protect the infantry, tunnels were pushed into no-man's land, reducing the distance from jump off to objective.

That Canada does not have as deeply ingrained a class structure as did Britain, the inclusion in the planning of all involved was made easier.  All officers and men were required to study in detail a huge sand table of the ridge and its defences.  For the first time, junior NCO's were issued maps and given specific orders and objectives.  This greatly increased confidence and allowed small units to operate with more initiative and independence than heretofore.  Chains of command were well established with subordinates made aware of their superior's goals in order to counteract the confusion which takes places when leadership suffers attrition.

On the morning of April 9th, 1917, in the face of driving sleet, the four divisions of the Canadian Corps set our from their assault positions.  The preparatory bombardment had been successful in reducing German guns and blowing gaps in the wire.  The following fire plan to coordinate with the infantry was a complex mix of lifting and shielding barrages that in no small way enabled the foot soldiers to carry the ridge.

In the following five days of battle, not only did the Corps take and hold its objective, but had also "made an unprecedented advance on a front of 6 kilometres, capturing   more than 4000 prisoners and 54 guns at a cost of over 11 000 casualties" (Marteinson, John "We Stand On Guard" pg 162)

Vimy, and the battle for its ridge in 1917 has become a touchstone moment in Canadian history, and many view it as the moment in which we began to form a true national identity segregated from the previous notion of being only a component part of a larger empire.  I've contested this notion previously in a very unpopular post, Taking the Ridge.  That essay proved unpopular because I chose to call into question this perception of achieving our national identity through battle as well as looking at the battle objectively alongside the events concurrent to it can seem as though we as Canadians ascribe too much precedence to the small part Vimy played in the Battle of Arras.

Nevertheless, it does not discount that achievement itself, nor lessen the reputation the Canadian Corps would build from that time forward as an elite fighting force.  Historian G J Meyer in his book on the First World War, "A World Undone" sums up the criteria of this reputation, stating that by 1918 (under Currie's command) the Canadian Corps had:

a record that is nothing less than astonishing in the context of the Great War.  They never once failed to capture an objective, never driven out of a position they had an opportunity to consolidate and never lost a gun. (Meyer pg 691) 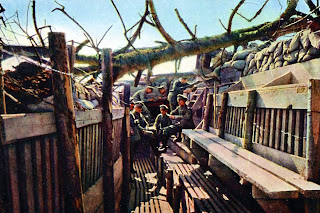 The significance of the war on Canadian history is undeniable.  Through our country's participation in events from 1914to 1919 both at the front and at home, our Dominion proved itself as modern, progressive and capable as any other nation.  That our military accomplishments gained us a recognition on the international level beyond the obscurity we were subject to beforehand is unquestioned.

Expanding this line of thought beyond Canadian identity brings us to consider how the war effected the whole world.  I touched on this idea in the essay A Wide Reaching and Lasting Influence where I purported that the Great War is the single most influential event in modern history. I believe that all events prior to the war created the environment for it to happen, and all else that followed, including the present is a direct or indirect consequence of the events of those four years.

It is terrible, then, that the common perception of the First World War as a needless and inconclusive slaughter greatly diminishes any significance the war had to humanity.  If looked at in any cause and effect detail, the First World War's impact on history is relegated to it's influence on the start of the Second.  By and large, the Great War is seen as a destructive effort holding little redemptive qualities.  The upcoming hundredth anniversary of the war has spiked interest in it's study, but my fear is that after 2014 this part of our journey will recede into the mists of time, scarcely thought of, rarely studied and incompletely taught.

If we want to continue to diminutise  the outcome of the war's history, all we need do is nothing.  By doing that, though, we forfeit the inherent lessons and devalue the sacrifices all nations made for better or worse.

The other option is more difficult, because it involves changing minds hard enough to do on the face of it, especially difficult when it involves things which happened several generations ago.  I began If Ye Break Faith as an effort to ensure that those of the CEF who gave their lives in the war wouldn't retreat into anonymity; but I can't help to realize that notion is only a small part of the work to be done.  We need now, more than ever, to study, educate and preserve the history of the Great War because of what we can learn of ourselves through it, and IYBF wants to be a driving force behind this effort.  If only I knew how exactly to best accomplish this desire.  Thoughts, suggestions, comments and questions can be posted here.

Posted by Christopher J Harvie at 09:17