Thanks to all for standing by.  Once again, I'd like to offer sincere apologies for there not being an update on Monday.  It is especially unfortunate that this is due to my internet provider, Wind Mobile and their appalling customer service.  I've registered a complaint against them with the Better Business Bureau and advise my Canadian readers to avoid giving them their custom.  If I could afford any other service, I would have voted with my feet long ago, but necessity is what it is.

I've been enthusiastically working on the article I've been invited to submit to a Canadian periodical.  I'll give more details soon, but don't wish to speak out of turn until I've got the go-ahead from the publisher.  Let's just say this:  It is a tremendous opportunity for me, and more importantly for this body of work.

You can keep up to date with developments through out presence on Facebook and Twitter.  As always, comments questions and suggestions can be forwarded here.

Via one of our followers is a link to the Australian War Graves Photographic Archive, an effort to preserve through images the resting places of Australia's war dead.  This brought me to consider the roots of "If Ye Break Faith" and its primary purpose to perpetuate the memory of the fallen. 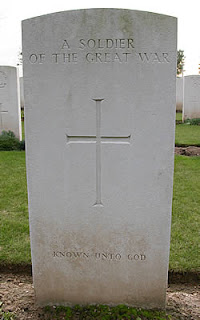 There is a melancholy sentimentality to those killed in the First World War, perhaps due to the indecisive nature of the conflict, but owing mostly to the contemporary shock at the unprecedented loss of life.  It is estimated that the war is responsible for a figure of 15 million dead, both civil and military.  The most difficult aspect of these deaths were the large numbers listed as missing and whom still today have no known grave.  There are few things more evocative in the history of human conflict than the three words "Known Unto God."

It is a practical necessity as well as human sentiment to inter the dead as soon as possible.  Quite frequently fatal casualties were given a quick burial, then later re-buried when proper cemeteries were established.  For convenience, many of these were built near casualty posts though not altogether too near. There were considerations for both hygiene and the psychological health of wounded expected to recover that the dead be kept separate as situationally possible.

But it is the very nature of the war which is responsible for the lack of identification for so many lives lost.  The dangers of crossing No Man's Land made it difficult or impossible at times to retrieve the dead.  There were local cease-fires arranged from time to time to bring the fallen in, such as that between the ANZACs and Turkish forces at Gallipoli on 24May 1915.   The other part to this question is quite simply that the prime cause of casualties in the war was artillery fire.  Shrapnel and high explosive shells often do not leave intact corpses; buried men under collapsed trenches or bunkers and even more gruesomely would disinter men already buried, confusing the identification process further.

What the large numbers of missing and unidentified did was add to the sense of the war lacking closure, and had a profound effect on those who had no answer as to what happened to a loved one lost.

After the war, the former belligerents made tremendous efforts to establish permanent resting places for those killed, and commissioned monuments to the missing such as those found at Theipval, Vimy and the Menin Gate.  Today, organisations such as the Commonwealth War Graves Commission continue to maintain these monuments and markers, as well as undertake efforts to identify remains.

Many countries have tombs dedicated to unknown soldiers, the unidentified remains symbolically representing all from that country who’s bodies have not been recovered or identified.  For Canada alone, between the First and Second World Wars and the Korean Conflict there is an estimated 28 000 service personnel Killed in Action who have no known grave.

Last year, that number was reduced by one upon the positive identification of Pte Alexander Johnston, a handyman who lived in Hamilton, Ontario killed while serving with the 78th Battalion (Winnipeg Grenadiers) 12 Brigade, 4th Canadian Division on the 29th of September 1918. 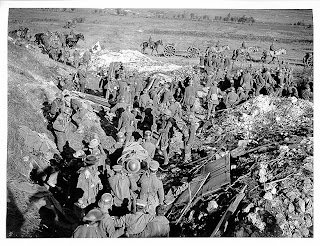 The 78th Battalion had been on the Western Front since August of 1916, Johnston joined them early in September 1918 after his conscription under the Military Service Act in January of the same year.  Less than a month later, after heavy and near continuous fighting in the campaign known as “The Hundred Days”, Johnston would be dead; one of 30 000 casualties in the first phase of operations.  “The Hundred Days” offensive would carry on until the Armistice in November and Johnston would remain missing for a further ninety years.

On the 26th of September 1st and 4th Canadian Divisions moved into starting positions on the western bank of the Canal du Nord, an incomplete artificial waterway running roughly north-south at appoint east of the small town of Barille.  Here the canal was not overlooked by the enemy as it was further north; the crossing, down one high embankment to the other on the eastern side was dry as well.  The only detraction was the crossing point was far too narrow to allow a general advance.  At zero-hour, 0520 27 September, Canadian artillery began shelling German lines.  Shortly after: “four battalions of the 1st and 10th Brigades dashed across the dry canal bed.  Light opposition on the east bank was rapidly overcome, and within an hour a 2000-metre-deep bridgehead was firmly held.” (Marteinson, 200)  Now, follow up units could pass through and continue towards the objective city of Cambrai.

The 4th Division was held up by dedicated enemy resistance from the direction of Bourlon Wood.  Flanking units from the XVII Corps of 3d British Army had not kept pace, requiring 11 and 12 Brigades to clear the heights surrounding the wood, which they accomplished by 2000hrs.  (Marteinson, ibid)

The next day, the 78th Battalion had consolidated along the Douai-Cambrai Road in preparation for the advance on Cambrai itself.  The Battalion War Diary cites “stiff resistance...and heavy shelling” throughout the day.  It was during this shelling that Pte Johnston was killed.  Once Johnston was listed as killed, his next-of-kin would have been informed, but with the disturbing news that his body could not be found.  It wouldn't be until an excavation for a construction project in 2008 disinterred his remains that his journey into recognition would begin.  The lands of the Western Front still surrender vast amounts of physical history; from the hundreds of tonnes of unexploded munitions collected each year known as the “Iron Harvest”, to geographical features such as bunkers and trench lines, an unthinkable amount of human remains and countless other artifacts.

Even when a body is found, identification is not a guarantee.  In Johnston’s case, badges known as “collar dogs” helped to place the body with a particular unit.  There is then a process of elimination to narrow the field to as few probable candidates as possible.  DNA samples between the body and potential living relatives are compared to give a positive ID.  This process, pending the availability of information, takes years to complete; undertaken by dedicated researchers and volunteers.  Pte Johnston wasn’t identified until last year, and was buried with full military honours at Cantimpre Canadian Cemetery in Sailly lez Cambrai, France on 26th October 2011 with a handful of his surviving relatives in attendance.

The difficulty is that Pte Johnston is a rare case.  Despite the amount of remains and artefacts found each year, the odds of identifying a body from hundreds of thousands of candidates after nearly a hundred years are long indeed; and that is pending having enough evidence on hand to begin the process.

For one family this gives a piece of closure in a war that has a notorious reputation for lacking closure.  It is only through the continued efforts put forward by various museums, universities, departments of defence and civil projects from many different nations that give us the opportunity to more completely understand our past.

The ambiguity of the Great War persists through the vast amount of missing information which will never be part of a complete picture of events.  If, though, as a society we choose to push beyond our past without as thorough an understanding we can build, not only do we stand to lose the lessons history has to teach us, we also abandon any hope that more lost soldiers will get to go home.