I really must get cracking; I’ve just received a tentative acceptance for an article pitch.  I don’t have a deadline yet, so I’ve got a head start to put my best effort in.  I’m quite chuffed by this, and it came at a great time for me.

My last couple of posts, the first after a short absence were well taken in, and once again I extend thanks to you all, and a certain appreciation for the fantastic direct feedback some of you were very kind to express.  For those of you just joining us, either upon a recommendation or through a random Google search, welcome.  I plan in short order to begin developing posts based upon frequent search terms which drive people to this site.  At the same time, feel free to let me know if there is a particular topic you wish to address in this forum. You can always get the latest updates and links from our Twitter feed, Facebook page, or direct inquiries can be posted here.

As I see this space as a forum, I need to express my disappointment with History Television for what I believe to be poor programming decisions for the prime time line-up on the 9th.  They had a great opportunity to present available shows which would have reflected such an important day to Canadian history, but for some reason failed to do so.   I’ve written a letter to them in this regard, so I shall say no more about it. 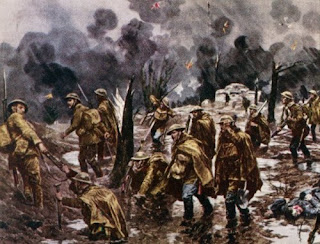 One of the most difficult stumbling blocks I come across in relating military history is a general lack of understanding the leadership structure of armies.  This is to do with the nature of the structure being two-tiered.  Historically, armies were led by sovereigns, with subordinate commands given to landed and titled members of the aristocracy.  Technically, only a sovereign can give orders to their forces.  Not being able to be at all places at once, they would allow their subordinates to act with sovereign authority in their place.  This consent was in the form of a commission.  As a means of leadership this worked well; one holding a commission was acting as the head of state.  Their word and orders were therefore law.  This tradition carries on today, with the term “Queen’s Commission” being used still to indicate from where an officer derives their authority.

The other tier, of non-commissioned officers, is quite different from that of the former.  A need for capable men to administer and discipline those in the ranks led to allowing those found able being given subordinate authority, granted in this case from the officers themselves.  This would allow these leaders to act with the right amount of authority.  Centuries earlier, when private soldiers were not much more than mobile weapons platforms, NCO’s were only responsible in assuring the line didn’t break, and for the direct care and feeding of the ranks.

Typically, NCO’s were drawn from soldiers with a certain length of service, and thus a relative level of experience and job knowledge.  They had enough authority placed upon them to carry out administrative tasks, but were rarely given autonomy to direct troops in the field.

The First World War was again an agent of change; the purpose and function of NCO’s underwent an immense transformation.  One of the main proponents of this change was the unprecedented size that armies reached to meet the needs to pursue war aims for all sides.  For the French, Germans and Russians this was made easy through long standing policies of universal conscription.  There were for them a greater pool of men with some military experience to pull from and as such had the structure to quickly place NCO’s and officers in appropriate positions. 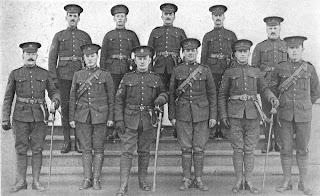 Britain, with its tiny all-volunteer force found the going more difficult.  As new regiments were being built from scratch to create the New Armies, serving NCO’s and those brought back from retirement were disbursed as could be, along with re-activated officers to these new formations.  There were, though, not enough to go around so more frequent was the practice of making leaders out of those who had experience with authority in civil life.  A popular if not perhaps generic illustration would be a Pal’s Battalion raised from a factory district, where the owner would be commissioned as Colonel, his managers to subordinate offices, with the workers becoming the private soldiers and the first line of authority coming from giving shop supervisors a few chevrons.

However, the translation of civil leadership to that required by the military is not direct, and a lack of appropriate leadership contributed to the restriction on how well these units were deployed and functioned under fire.  This had terrible repercussions on the eve of the first Battle of the Somme:

“The men of these (New Army) battalions had, of course, been in the army for at least a year, many of them since August 1914, but it is one thing to train private soldiers and quite another to furnish the officers and NCO’s to lead them....To produce those officers and NCO’s takes far longer.  With only two or three officers and perhaps half a dozen NCO’s with any experience in a battalion of 1,000 men, only the simplest of tactics could be employed.”  (Corrigan 259) 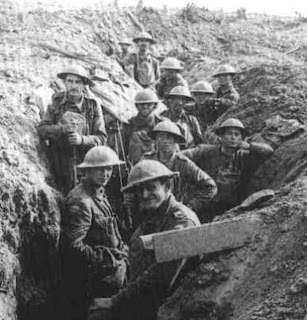 The high attrition rate of officers was directly responsible for elevating the level of authority NCO’s had prior to 1916.  The reform of the base of tactical structure undertaken in early 1917 from the company to the platoon level relied primarily on giving NCO’s more autonomy than before.  More and more it was realised that corporals, sergeants and warrant officers when properly trained and motivated could respond well to tactical circumstance and make sound decisions in the moment, when time to consult with an officer would have been wasteful; providing there was an officer left alive and effective.  Building the confidence of rankers to take initiative worked against the inevitability of leadership attrition and could help stop an attack from stalling for lack of officers to lead and direct.

The Germans went a step further and developed a platoon structure lead by a senior NCO as opposed to a junior officer, allowing their forces to continue to function effectively despite a lack of a full complement of officers. (Holmes 536-7)  The evolution of raising NCO’s to a level of true leadership from that of a mere whip began in the war.  As well as schools and courses to develop officers for staff positions created by raising a large army, similar courses were introduced to adequately prepare junior ranks to take on the newly important role NCO’s had begun to assume.  Non commissioned officers are the line of memory to lessons inherent to combat and the military in general, and remain the backbone of structure of armies. (Stroud 58)

“Senior NCO’s are considered the primary link...in a military organisation.  Their advice and guidance is particularly important to junior officers, who begin their careers in a position of authority but generally lack practical experience” (Wikipedia.org)

I come from a long line of NCO’s.  One of my great-grandfathers (more about him here) spent a great deal of time with the colours, serving for the duration of both the South African War and the First World War.  My paternal grandfather was a Chief Petty Officer with the Royal Navy; my mum’s dad was a Corporal in the RAF.  My father insisted that should I join the army, I should do so with the intention of receiving my commission.  His argument was imbedded in his perceived ideas of class.  I did at one point have the ambition to follow through on this goal, but lacked the educational criteria required of officers in the Canadian Forces.  As such, I remained an NCO during my five years.  While my service may have left a lot to be desired, I take great pride in identifying myself among the finest men and women our armed forces have; a cadre of non commissioned officers who carry on the traditions of our military heritage and inspire those they lead to follow them in the successful execution of mission.