The re-branding of "If Ye Break Faith" has already begun.  I have decided that the site, and the project's main purpose is to be the education of the First World War, particularly as it relates to Canada.  The inspiration to move in this direction comes both from my passion for the subject matter and this recent article from the London Free Press that sheds a shocking light on our collective understanding of such an important part of our past.  The war is so crucial to the history of our country, and the development of national identity that I have decided to deepen the examination of these factors with a series of posts, including this one.  Of course, the shift in "If Ye Break Faith"'s mandate was taken in part by the launch of the Royal British Legion's "Every Man Remembered" project, which I fully support, but does make the initial motive behind my project redundant.  Dedication to educate about the war is as far as I've gotten, I have no clear concept in mind of how I intend to achieve this aim. Helpful suggestions and comments are always welcome, and you can follow for updates on Twitter and Facebook.

In my last essay “Who We Were and Who We Are”, I very broadly examined Canada’s close relation to 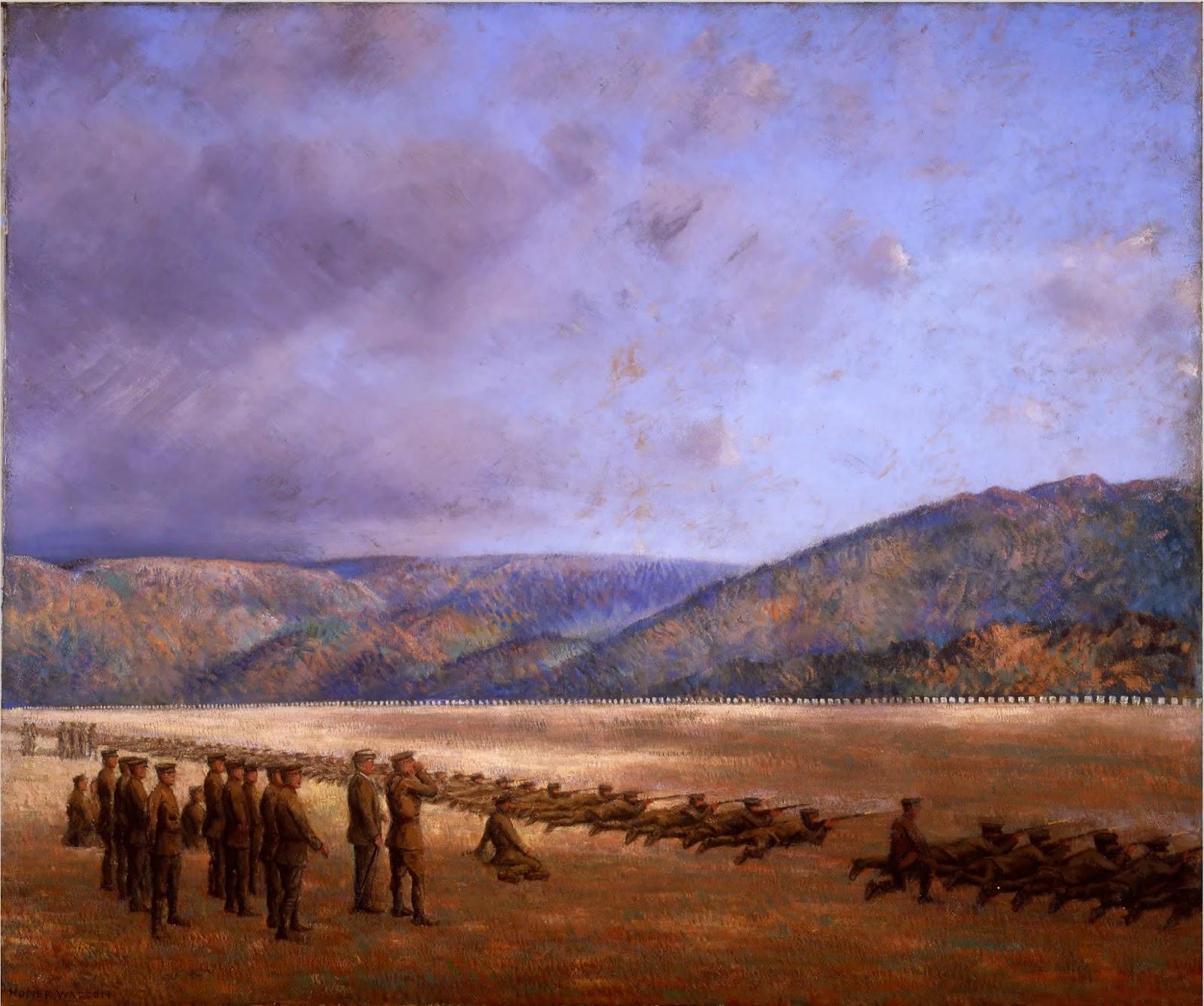 Empire and the shift in that identity brought about by World War One.  What I’d like to do now is to take a closer look at some of the factors which inspired that change.  In the years before the war, Sir Wilfred Laurier had addressed the Commons, saying “When Britain is at war, Canada is at war.  There is no distinction.”  His comments, viewed in context, are more of a statement of legal obligation than as some may interpret it presently as a pledge of solidarity.  Canada was far too subordinate at the time to take decisions on policy of war independently.  It is important to keep this nature of political identity in mind relative to the point in time it existed, as well as the largely British nature of Canada’s population in 1914.  One part would dictate the existence of a state of war, the other would explain popular enthusiasm for it.

The patriotic rush experienced in other countries was no less different here.  Parliament’s original authorization of an Expeditionary Force of 25 000 was quickly over-subscribed by more than ten thousand, with many more being turned away.  The Duke of Connaught, Canada’s Governor General, believed that getting Canadian troops to the front as quickly as could be met minimal training standards would keep domestic enthusiasm at a high level.  “Having men fighting and bleeding on European soil for the Empire would ensure the commitment of Canada to the cause.”[i]  Such enthusiasm inspired the government to commit to sending ever more troops to the war.

Historians often remark on how poorly prepared European armies had been for the scope and scale of the conflict which would become the Great War.  This is no less true and perhaps more so in Canada’s case.  The country has never been, nor had any cause to be, heavily militarized.  In 1914 the Permanent Force numbered just over three thousand officers and men, the reserves counted almost sixty thousand members of the Active Militia, many of whom had just attended annual camps in July.  The attendance at the 1914 concentrations was the largest yet seen.  It had been so largely because of Sam Hughes, Minister of Militia.  He viewed the part-time force as Canada’s primary military source, increasing spending from 1911-13 by more than $6 million annually, encouraging participation in camps and adopting a training module regulated by British standards.[ii]  Numbers of men, regular or reserve, on paper hardly account for how difficult it would be in a practical sense to organize a force for war in Europe.

There were two comprehensive plans on file for assembling and training a force drawn from Militia units for service in an overseas war.  Both plans had merit and detraction in their differences, but similarly called for equipment issue and basic training to be conducted locally.  Once these logistics were complete, individual units would concentrate for further training at the division level.[iii]  Local commanders would select their own officers, with senior officers being appointed by the Chief of the General Staff.  With a broad timetable, either plan would provide a combat ready division within a few months of mobilization.

Hughes discarded both plans in their entirety, instituting his own and exerting a great personal control in every aspect.  Instead of organizing locally, Militia units would form up and train at the very start at Valcartier, a camp which had yet to be built.  All required equipment would be procured and issued there.  This took away from the gradual and measured nature of the prior designs and injected a larger sense of urgency.  Part of this was due to the notion that a large European war couldn’t last long.  It was believed either a decisive victory in the opening campaign or a lack of financial backing for a protracted conflict would see an early end.  Hughes wanted Canada to get active in it before it was all over.  The other nature of his deployment strategy, and his insistence on tight control was more personally political.  Building Valcartier and tenders for equipment and supplies were contracted to firms with business ties to the minister.  Eschewing the logical notion of formation commanders appointing the officers to serve beneath them, Hughes took this ability out of their hands, commissioning party friends to levels of command for which some were unqualified; even going so far as to appoint officers at platoon or company level, often on a whim.  He deconstructed regionally established regiments by forming mixed battalions from their component companies.[iv]  Only battalions that could organize quickly would remain intact.  This act took away from previous regimental solidarity, a matter of deep pride in the Canadian military system, but it brought together Canadians from different parts of the country. 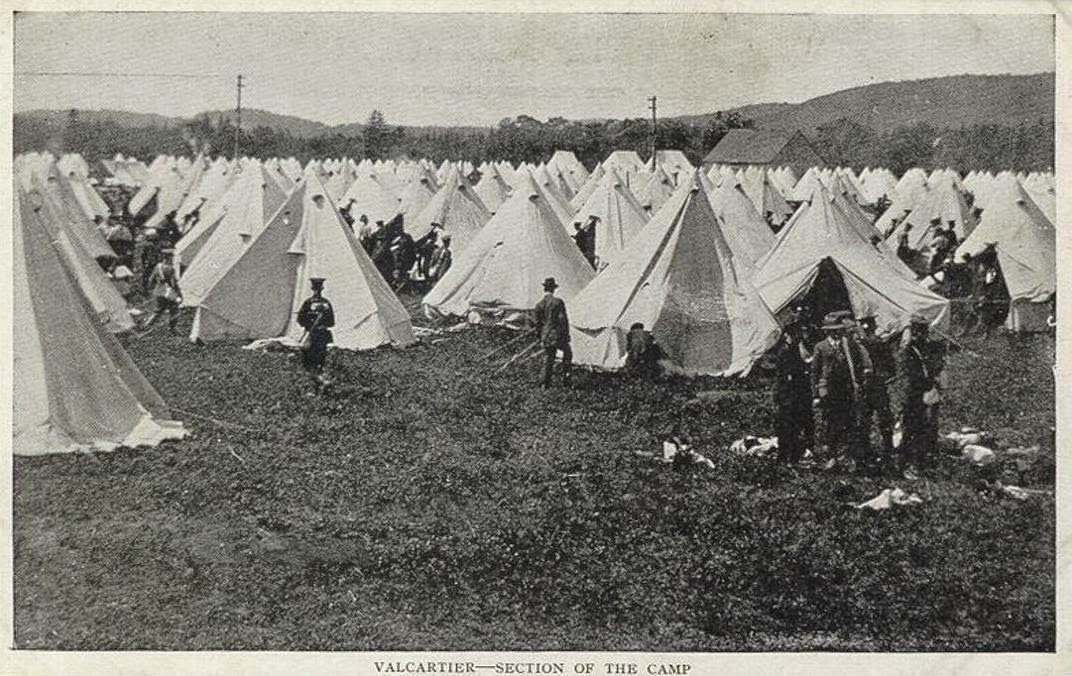 A lack of initial preparedness and the move towards Hughes’ design in place of established plans was a recipe for disaster.  It is then remarkable in the face of this that the first troops began to arrive at Valcartier on the 19th of August, and by the 3d of October the First Contingent (later organized into 1st Canadian Division) of 30 000 men were aboard 31 ships about to sail to England.  The over abundance of troops at Valcartier and Hughes’ personal control over which would be sent in the First Contingent meant he could withhold selection information hopefully to inspire high performance.  The whole show hadn’t gone off without a hitch, though.  Problems with equipment- in supply and quality, confusing policies enacted on the fly and changed without warning requiring orders and contradicting counter-orders all lumped in with Hughes’ micromanagement were constant threats to a quick deployment.  Nevertheless, Hughes’ bombast and bullying and the dogged perseverance of those under his control at Valcartier achieved what some had thought impossible.  Learning to operate in a state of perpetual chaos from a very early point would serve the Canadians well when they would finally get to the front.

In any event, thoroughness was sacrificed in the name of expediency.  When the First Contingent arrived in England it was deemed so woefully undertrained six months would pass before it would deploy to the front.  Those six months were to be spent on Salisbury plain, during a miserable, wet winter, under the thumb of hardened British regulars as training cadre.  Hughes and the Governor General’s shared desire to get their force into action quickly had necessitated that certain elements of military indoctrination, particularly relating to conduct, propriety and discipline had been glossed over.  Officers and NCO’s new to their position would have difficulty enforcing discipline especially as it hadn’t been thoroughly instilled from the get-go.  Add to this young men away from home for the first time, with money in their pockets, unused to strong drink and a reputation for insubordinate, drunken loutishness began to take hold.  They were derided by locals and held in contempt by the British assigned to train them.  As so often happens in cases like this, there was created a solidarity which bonded the men together.  Justified or not, the view of the Canadians as uncouth, rustic colonials gave the men of the 1st Division a distinction they could delight in.

Losses at the front had created a demand for immediate reinforcement.  The Imperial General Staff wanted to send battalion or even company-sized drafts from the Division and integrate them into British units at the front as soon as they demonstrated proficiency.  While this would have provided for the acute demand, it would have destroyed the integrity which was being built.  For all his exasperating meddlesomeness, Hughes once again did something that would speak to his merit.  He insisted that “his boys” would go into battle all together, or not at all.  It speaks to his perseverance and to the growth of our national identity that he got his wish.  The men from Canada would then be together through the same experiences and hardships, and from this, their solidarity would grow.

Already the men of the Canadian Expeditionary Force had begun to form a notion of themselves as distinct from their British roots.  It would be their trial by fire and three more years of war that would further evolve and solidify their new sense of identity.