Today, the series on the development of the Western Front continues.  If you haven't already, I suggest you read the preceding parts, "Last Light" and "Sun Down".  I'd like to extend my gratitude for all who have read, liked, retweeted and upvoted the series thus far; I feel a great deal of satisfaction and success that they have been so well received.  As always, comments, questions and suggestions are most welcome, and this blog can be followed through Twitter and Facebook.

The knockout blow the Germans had aimed at Paris had been thwarted by a combination of Allied cooperation and a loss of unit cohesion in between the German Armies.  Moltke, the German Chief-of-Staff, was now in the unenviable position of having the situation dictate his actions instead of the reverse.  So it was that “along a front of nearly 250 miles, the German infantry faced about and began to retrace their steps over the ground won in bitter combat during the last two weeks.”[1]

Now it fell to the French and British to come out swinging, rapidly close with and destroy the enemy before it could reorganise.  Only, they couldn't; they were “badly battered, worn out and running low on essential

equipment.”[2]  For the BEF alone, it had, over the past seventeen days moved- in advance and retreat- nearly five hundred kilometers, an average of more than twenty each day, every day while being in close contact with the enemy through most of that time.  The Force’s two corps had been reinforced by a third fresh from England, but there were no individual drafts to bring the existing corps back to strength.  It’s worth noting here that the BEF was overwhelmingly professional and therefore expected to perform at this level of hardship.  It can only be imagined how this strain, depleting the effectiveness of a regular army was borne by the French and German reservists who had been in civil life just five weeks prior.  Nevertheless, professional or not, all belligerents in the West, including the tiny Belgian army holding at Antwerp, were being fought to death.

That was only part of the problem.  It was quickly becoming apparent that modern war on such a vast scale was creating material demand which far outstripped supply.  One estimate was that the French daily production of artillery shells was perhaps 20% of requirement.[3] There had been stockpiles made before the war, but with a continued deficit a zero sum would quickly be reached.  The British had no such reserve, even less industrial capacity and the added problem of a long supply line, part of which was across the channel.

Such factors were now giving credence to the belief that a swift victory, though looking less likely as the situation deteriorated, was entirely critical.  No one had any confidence that popular, material and financial support could be counted on to continue and make a protracted war possible.

The “cult of the offensive” Sir Richard Holmes mentioned had been found wanting, where on the eve of war “Offensive war plans ruled.  Russia planned to advance into East Prussia.  France proposed to launch Plan XVII, an all out attack into the provinces of Alsace and Lorraine.  And Germany sought to execute a plan named after a previous Chief of the General Staff, Alfred von Schlieffen.”[4] Yet each of these grand strategies had been insufficient.

In the East, a stronger than expected Russian showing had crippled the Austrians.  Even though the Tsar’s armies had been badly defeated by the Kaiser’s at Tannenberg, the Central Powers’ eastern campaign was in jeopardy.  Given ample time, Russia’s vast manpower would dominate.  The pressure was on Moltke to perform in the west.  The French fortress of Verdun had held and now became the lynch pin on which Allied and German lines would hinge.  Extending east-southeast from Verdun the opposing armies of Plan XVII’s main effort and the Schlieffen blocking force had fought to a standstill.  That left the terrain north from Verdun to the coast as the only viable ground to allow for a desperately hoped coup de gras.  The stagnation in the south meant that men could be transferred up the line to support an expected counterattack, and shore up the worrying gaps between 1st 2nd and 3rd Armies.  By affecting his withdrawal from the Marne to the Aisne, Moltke had “shaken out” his line.  While this meant ceding vital ground, such as the rail hubs at Reims, Amiens and Arras, the concentration had shortened the length of front to be defended, and even more manpower could be shifted to the still active area.

Before the offensive could resume, the Allied advance had to be checked and repulsed.  The unfortunately languorous Allied pursuit had given the Germans the time to select and prepare a defensive position to ensure such a reverse.  Just beyond the river Aisne, the land rises to high cliffs, some 300-400 feet, levelling to a 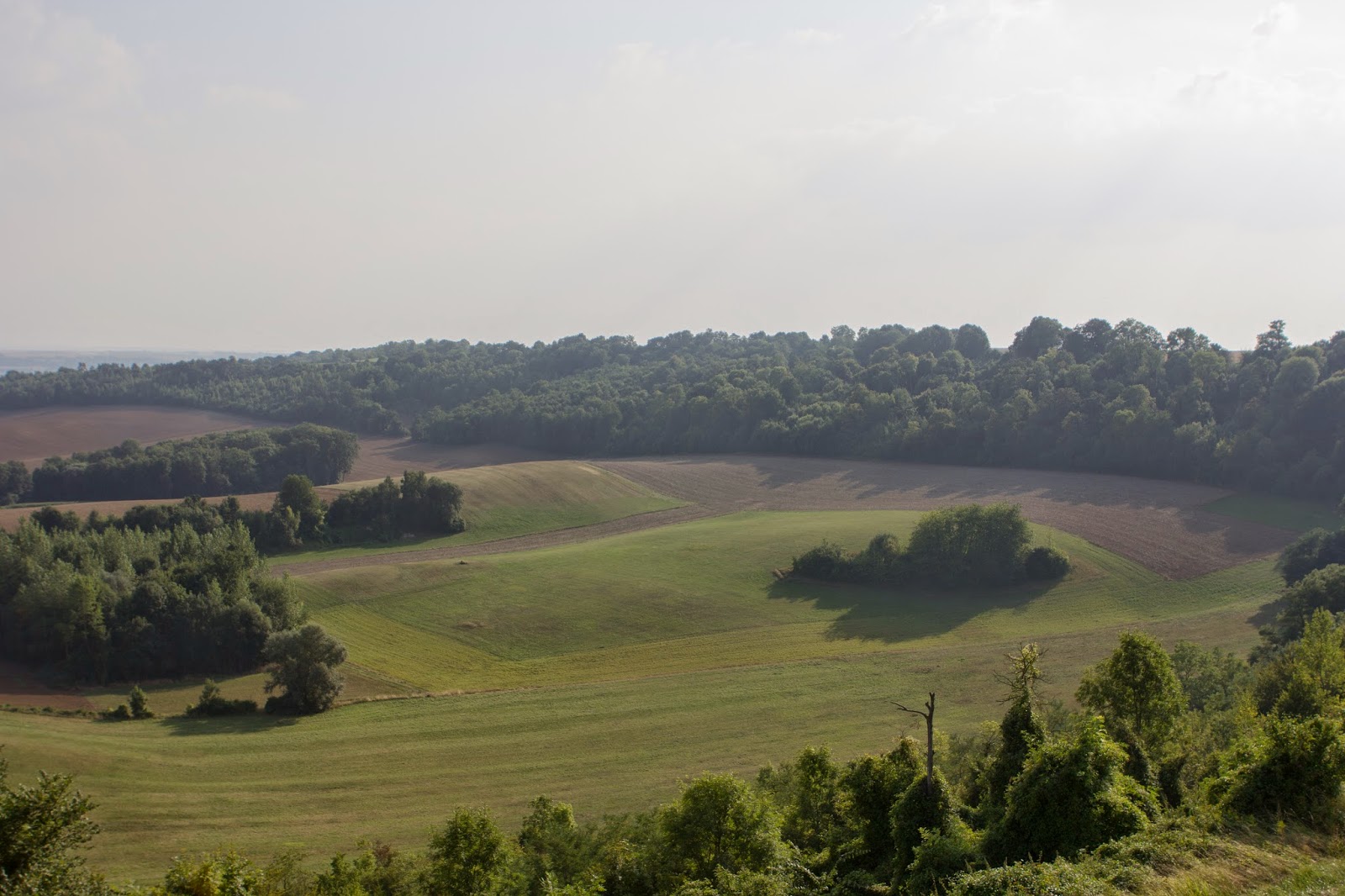 plateau.  The river itself was wide and deep, only crossable at bridge points which had mostly been demolished.  Approaching the heights would be difficult for “low crops in the unfenced countryside offered no natural concealment to the Allies.  Deep narrow paths cut into the escarpment at right angles, exposing any infiltrators to extreme hazard.  The forces on the northern plateau commanded a wide field of fire.”[5] Moltke’s orders, of 13 September, would prove to be prophetic: at the line of the Aisne positions would be “fortified and defended.”[6] They would also prove to be his last.  Having failed to gain victory within the forty day margin the Schlieffen Plan dictated and not ever in favour with Kaiser Wilhelm II, he was replaced as Chief of Staff by Erich von Falkenhayn on the 14th.

On the night of the 13th, the British and French forced a crossing of the Aisne using what bridges were still serviceable and pontoons put together by engineers.  Then “the divisions made a rather cautious and leisurely advance.”[7] The caution was warranted, as the location of the Germans wasn’t fully known.  Despite this, and without waiting for a complete crossing, forward units under cover of fog and dark of night attempted to gain the heights.  Again, offensive spirit was the prevailing thought; that sufficient dash and élan can overcome a defensive position.  This can only be true if both superior numbers and firepower are present, and the British had neither.  Some of the harsh realities that would define the First World War were about to be seen.

A fortified position such as the one the Germans had dug into the ridge is of a type the Chinese military theorist Sun Tzu called “strategic ground”.  “When ground offers advantage to either side that is strategic ground.”[8] Master Sun advises that those who occupy this type of ground not be enticed to attack from it, but defend it and keep the advantage.  If the enemy has taken strong positions on strategic ground, he should not be directly attacked, but circumvented.  His centuries’ old warning on this topic was “on strategic ground, do not attack.”[9]

With daylight, the British lost the concealment darkness offered.  Those on the approaches were caught in the open and ripped apart by artillery.  The river crossings came under indirect fire as well, hampering the forward movement of reserves.  Leading units mounting the slope through the defiles were raked by enfilading fire of well sited machine guns.  Despite terrible losses, the heights were taken.  Without the units which had been pinned down at the river, there was no way to properly consolidate the position.  A concerted counterattack on the 14th pushed the British back again.

For a further 13,500 [10] casualties, no gain was made.  Facing critical losses, Field Marshall French ordered his Corps to entrench.  A German officer at Aisne said “We are all hoping that a decisive battle will end the war.”[11] With frontal assaults now of little use, something else must be tried.  Falkenhayn, on taking over from Moltke really only had one option-he would try to move around the Allies while simultaneously protecting his right flank.  He was not the only one to make this assessment; “both commanders had grasped that opportunity in the campaign in the west now lay north of the active battle front, in the hundred mile sweep of territory...between the Aisne and the Sea.” [12]

Over the next three weeks, both armies would make to exploit this open ground, like two strangers meeting on the street attempting to step around the other by moving in the same direction simultaneously.  This mad dash, known as the “race to the Sea” would define the shape of the Western Front.  The fighting along this line about to take place would create the conditions which would dominate the rest of the war.