Today, If Ye Break Faith presents the concluding essay in the four part series on the formation of the Western Front.  This particular series has proved quite popular, and if you're just catching it now, it is suggested you read the preceding posts "Last Light", "Sun Down" and "Always Darkest".  I'm looking forward to more feedback, and perhaps suggestions for a future explorative series.  As always, comments, questions as well as suggestions are most welcome.  Feel free to follow If Ye Break Faith through Twitter and Facebook.

The war had been raging for two months.  Not only was it hoped that it would be over by Christmas, it had be over by then.  Strictly by the pace the massed armies, east and west were destroying each other, victory had to come quickly before wastage was total.  There were less and less likely conditions which would avoid a long campaign of attrition, and the diminishment of these conditions would ironically be set in play by decisions made to avoid such circumstances.

Falkenhayn, upon taking over from Moltke as German Chief of Staff had two objectives in the west- to protect his exposed right flank and to take Antwerp.[1] Antwerp’s capitulation would not only deliver a deep water port into German hands, but create an unimpeded axis of advance through Flanders and free up the units there to bolster the numbers that would attempt an exploitation of the open ground of Flemish Belgium and Northeastern France.  His first objective had largely been achieved by having stopped the Allies at strong defensive positions along the Aisne and by holding firm a line which was extending southward far beyond the French fortress of Verdun.

The Allies sought to prevent this and had their own design to use the same ground to turn the German flank.  Costly losses at the Aisne had driven home the lesson of there being no going through, so had best to be going around.  The threat against Antwerp was a real concern, particularly to the British.  Their continued existence on the Continent was solely dependent on having access to the sea.  King Albert I of Belgium, in direct command of his country’s army held as long as he could at Antwerp, but wisely ordered a withdrawal on the 10th of October when his rate of casualties caused by the siege proved critical.  Now with Antwerp abandoned, “control of the Channel coast was deemed a strategic priority.”[2] Field Marshall Sir John French, commanding the BEF began to disposition his forces around the low ridges of high ground to the east of the town of Ypres.  Ypres was “strategically located along the roads leading to the Channel ports in Belgian Flanders.”[3] With the French on the right and Albert’s much reduced force on the left, between the 8-19 of October the BEF occupied thirty-five miles of front in the centre of this line which due to topography took the shape of a fat finger pointing towards the Germans.

Flanders is not an ideal place to conduct military operations.  Its ground is mostly low-lying, prone to flooding and interspersed with ridgelines, hills and isolated woods.  In his next forward move, Falkenhayn would try to avoid this territory by initially pressing against the Belgians.  Their defeat at Antwerp had substantially weakened them not only in manpower, but in crucial supplies of ammunition and much of their artillery had been left behind.  On the 20th, the Germans attacked.  King Albert was in a trying position.  His forces were in great peril of being overwhelmed, the Germans having the right numerical advantage to break a defensive line so thinly held.  If his army couldn’t hold out, not only would the ports of Dunkirk, Calais and Boulogne be taken and thus possibly force Britain from the war, but he would loose what little sliver of his country he had left- and very possibly his crown as a result.  A desperate measure was called for.  With the knowledge he was saving his country by doing it harm, Albert ordered sluices on the sea dykes to be opened on the 27th of October, flooding twenty miles of land between Dixmude and Nieuport to a depth of more than five feet.  Now impassible, Falkenhayn would have to find another way around.

Albert’s actions may have saved his army, but it caused the Germans to shift their attention to the British who 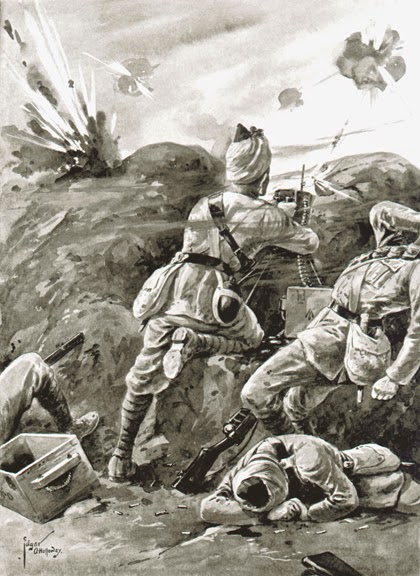 were not much better off.  They had, much reduced, seven divisions of infantry and three of cavalry who were mostly fighting dismounted.  Reinforcements would be a long time coming, provided the Channel ports could be kept open.  While the I Indian Corps (comprised of the Lahore and Meerut Divisions) had arrived in late September, other colonial forces were still en route, or like the volunteer armies raised at the onset in Britain, still in training and not ready to take the field.[4]

Doctrine demanded the BEF assume a defensive stance.  The British army had always entrenched when necessary.  Historian Maj. G Corrigan describes the opposing defensive philosophies well.  The French had assigned so much importance to their offensive ideology that any entrenchment was viewed as temporary shelter for use prior to jumping off in an advance.  Little care or effort was assigned to their construction or maintenance.  It was believed to do so would indicate to the men that a long halt was being affected and would therefore drain the offensive spirit.  Germans “on the other hand...were on someone else’s territory and, once the Schlieffen plane failed, were content to stay on the defensive while the Allies tried again and again to evict them.”[5] The British appraisal, Corrigan notes, was a compromise of the two.  They would have to win the war by advancing against the enemy, but could not do that until they had the strength of numbers required.  Until such time, the men would be protected within well built trenches.

The conditions for the British at Ypres were far from ideal from a defensive perspective, “the BEF’s trenches, at best hasty scratching three feet deep...frequently knee-deep in rain or groundwater (and) were as yet unprotected by barbed wire.”[6] Repositioning his men from the flooded uplands and overstretched rail transit bringing up reserves caused serious delays for Falkenhayn.  Thus the British were allowed crucial days in which to fortify their positions; occupying the best high ground available, setting up artillery observation in village towers and constructing strong-points in woods and stone cottages.

From the 31st of October a protracted and bitter struggle of what became known as the First Battle of Ypres began.  Now the war would begin to witness battles which had been measured in the span of hours and days become events counted in weeks and months.  It was set up, more or less by an accident of circumstance.  “Until hours before their armies crashed into each other, neither was expecting to encounter an enemy in force.”[7] The fighting was confused and close, often devolving to hand to hand combat as either the Germans or the British sought to gain some sort of advantage during large skirmishes at one point of the line or another.  With copious reserves, the Germans held a numerical advantage which was greatly offset by the inexperience of fresh and very young soldiers.  Often they failed to properly exploit gains, or would be brought to a standstill if the attrition of officers left them leaderless; worse was that these reserve units lacked competent leadership at all.  This resulted in such poor tactical choices leading to high casualties that the battle became known as the “Kindermord von Ypren”, the Massacre of the Innocents at Ypres.[8] The British were in not much better shape as they may have had the tactical edge of experienced professionals and a strong, deep defensive line but suffered from a complete exhaustion of reserves. 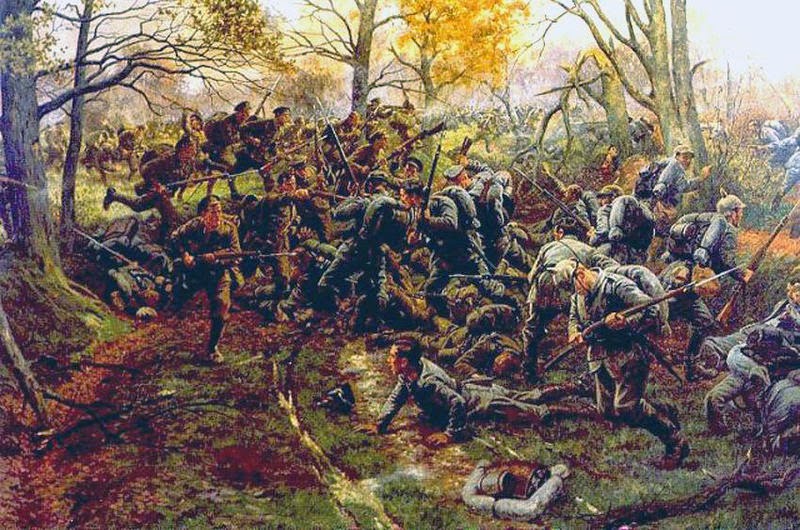 With such close and continued contact, headquarters normally removed from fighting were well within range.  At a crucial point in the opening of battle, a single shell killed or wounded the commanders and staff of two British divisions who had gathered in a chateau for a situational conference. [9]  Command; and the battle itself would devolve to smaller units as time wore on as brigades, battalions and companies became isolated from supporting units.  Ypres became a grinding battle of willpower more than anything else.  Through heavy rains along ground already wet and miserable and days growing colder, villages, woods and shallow trenches were taken and retaken.  For almost four weeks of assaults and counter attacks, wearied men on both sides continued to hammer away at each other in a dogged and brutal fashion.

As lines broke, the gaps were plugged with whatever men were to hand- even cooks and clerks were desperately put into the line.  “What ultimately saved (the British) at Ypres as earlier at Mons and Le Cateau was the accuracy and speed of the ordinary British rifleman.” [10] Able to fire at a terrific rate of fifteen rounds a minute and obliged by a naive enemy advancing in close order meant that the Tommies inflicted many more casualties than they themselves suffered.

Nevertheless, the BEF was shattered.  “In each of the battalions which fought on the Marne and at Ypres there remained, on average, only one officer and thirty men who had landed in August.”[11] With a total loss of 7,960 killed and 29,562 wounded[12] the British were on the edge of annihilation.  But the Germans had been dealt a severe blow as well.  Indecisiveness at the highest level of command as to whether priority be placed in the east or the west contributed to a lack of German momentum on either front.  As winter began to settle in, offensive action started to taper off.  In the following months Allies and Germans both would dig deeper and more heavily fortified works to the dual purpose of preventing the enemy from breaking through and to provide protection for the massive armies now gathering to make a breakthrough of their own.  The Western Front was made.