It's with great thanks that I extend my gratitude for the positive reception of the essays posted throughout the last month.  Serialising my posts is not something I had seriously considered, but as it allowed me to examine a topic in greater depth while keeping individual components short and therefore more digestible, I found I didn't have to make too many compromises on quantity and quality.  With the success of the five posts comprising the examination of Canada's national identity and the war, it has been decided to present another short series looking into a very key component of the war, which is nearing its hundredth anniversary: The formation of the Western Front.
I welcome your feedback in comments, questions and suggestions and can be followed via Twitter and Facebook.

Very little else defines the popular imagination of the First World War than the nature of trench warfare.  It 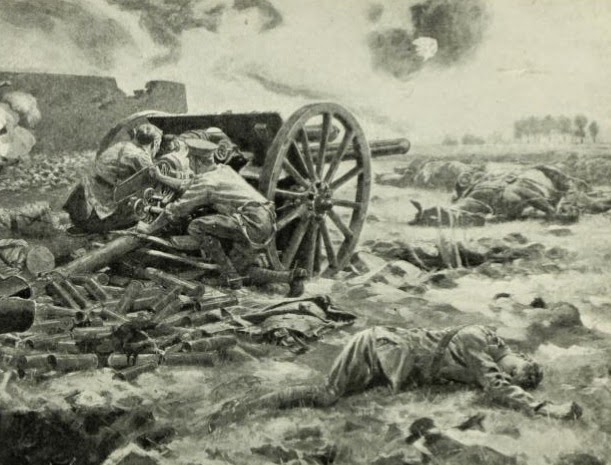 invokes the idea of futility, deadlock and terrible waste of lives through attrition.  From a remove of one hundred years, it may not be readily apparent the logic behind fighting a war of this kind, or how circumstances developed to permit such a state of affairs.  It begins with the notion that a large continental war was not predicted to last long, based on the size of armies and the cost of keeping them in the field.  Victory, therefore, would have to be swift and decisive; an all or nothing affair.  It was sound reasoning, but for one fatal flaw-everybody planned to do exactly that at the same time as everyone else.

The most recent European conflict, the Franco-Prussian war, had inspired military thinkers in the intervening years that only such bold offensive strategies could win.  This military philosophy evolved into what British historian Richard Holmes called “the cult of the offensive.”[1] The effect of offensive doctrine being assumed by both sides is not unlike two prize fighters determined to throw nothing but haymakers, landing a few hefty blows pushing from centre to corner and back again until both are reduced to clenching and exhausted jabs before the end of the first round.

Having had a humiliating defeat against Prussia in 1871, in which a reliance on a mostly defensive strategy was bested by the Prussian’s more dynamic tactics, France had seriously re-adjusted her military thinking prior to the outbreak of the First World War.  The prevailing doctrine, which became known as “offensive à l’outrance” or “unrestrained aggressiveness” became a key component of French war planning.[2] The idea was that adopting a defensive stance was linked to a defeatist attitude.  Only bold, continuous attacks could bring victory in war and the territory lost in 1871 could not be retaken without such an offensive spirit.  In case of war with Germany, the French had developed Plan XVII.  This ready-made strategy would see the army deploy into the frontier, retaking lost ground and meeting the expected German advance head-on and hopefully unprepared.  As far as strategic thinking goes, Plan XVII wasn’t that imaginative.  In fact, it was more or less what German military planners had expected France to do.  To avoid colliding with a strong French vanguard in the difficult terrain of wooded hills and narrow passes of the frontier, the German plan at the outset would largely bypass the most obvious route into France.

At the outbreak of war in Europe, Germany was in a very delicate position.  The entente between France and Russia meant that to attack one would mean war with both.  While militarily powerful, Germany lacked the strength to commit offensively against the two allies simultaneously. The man who was responsible for German strategy, Field Marshall Alfred von Schlieffen, Chief of the German General Staff 1890-1905,[3] had developed plans surrounding this very probable scenario.  Simply put, Germany would move aggressively against France, the weaker of the two, in a grand flanking movement which would avoid the frontier by way of neutral Belgium.  If enacted swiftly, the German army in the West could surround Paris and force a surrender.  France thus eliminated, the entire mass of the German army could then be thrown against Russia.
There were huge deficiencies in Schlieffen’s masterwork.  He had spent a long time and great effort in the coordination of troop movements; calculated railway capacity and developed timetables.  The precision is admirable, but its exacting nature made the plan inflexible. [4] An upset at any point of the process would have no contingency.  The assumption was that everything would work out because it had to.  Noticeably missing from the stratagem was where and how the decisive battle which would finally capitulate France would take place.  Above all, little consideration had been made that the Generals who would be commanding the offensive had never taken to the field with such large formations in any practical sense.  Neither had the French or the British, for that matter, but advancing so far and so quickly into enemy territory would stretch the limits of logistics and command and control.

Generaloberst Helmut von Moltke, the German Chief of Staff had been convinced to move troop dispositions at the outset, bleeding strength from the right echelon to reinforce the centre.  This was contradictory to Schlieffen’s desires (so much so that the old man is reported to have said “keep the right wing strong” as his last words[5]).  While it can be argued whether the move proved necessary to prevent a French breakthrough in Alsace and Lorraine, tinkering with the plan, combined with stronger Belgian resistance than expected and the presence of an 80 000 strong British Expeditionary Force could well have skunked Germany in the West.  Nevertheless, the initial phases of the Schlieffen plan went remarkably well, not least because France had been caught wrong footed with Plan XVII, the bulk of her armies being drawn away from the main German advance.

The French were forced to adjust their own strategy by making deployment decisions on the fly.  By following Plan XVII, the French Commander in Chief, Joseph Joffre, kept pressing attacks along the frontier and wasn’t fully aware of the strength or intent of the German forces moving through Belgium.  As the situation developed, to provide a sufficient blocking force, Joffre shifted his 5th Army north to meet the German right and requested the BEF form a defensive line in support of 5th Army’s movements.

Victory in war often goes to the side that can be most responsive to the changing situation.  In the case of these battles of encounter in Western Belgium and North-eastern France, the allies made a correct, but often misinterpreted tactical choice: They fell back.  Retreat should be understood to not always be synonymous with defeat.  Ceding territory to an enemy which will have to be retaken is regrettable, but a well-executed, organised rearward movement shortens lines of supply and communication while extending those of the enemy in pursuit-hopefully to a point of unbearable strain.  Attempts to check the German advance having been unsuccessful, the BEF and French 5th, 9th and 4th Armies began a series of retreats over twelve days.[6] 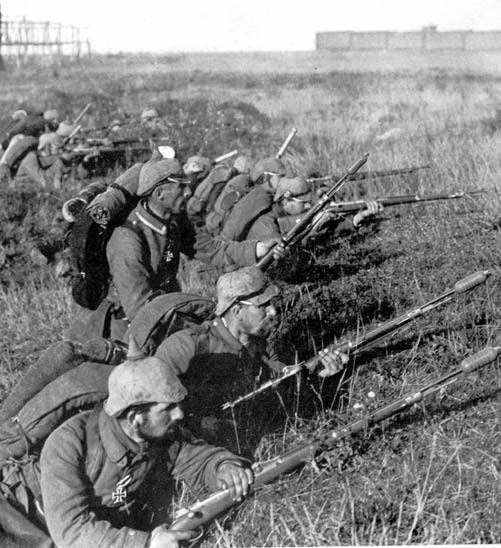 The anticipated encirclement and fall of the French capital was set to take place within the first forty days of the war.  With Russia expected to take six weeks to effect mobilisation in the East, “Between the thirty-fifth and fortieth day, therefore, the outcome of the war was to be decided.”[7] Paris was temptingly close, and some advanced German units were breaking out in cheers as they passed “Paris 30 Miles” signposts.  Despite delays besieging Belgian fortresses and last minute changes to a plan that demanded no change, the Schlieffen plan was adhering to schedule.

Joffre was coming under immense pressure.  The fighting retreat had preserved his armies and slowed the Germans, but they would have to make a stand somewhere.  Paris must not be allowed to fall.  The government had evacuated and reservists were entrenching in the suburbs in expectation of the German assault.  Even worse was the state of affairs between him and Field Marshall Sir John French, commanding the BEF.  French, prior to deploying to France had received a very broad mandate from the Secretary of State for War, Lord Kitchener: “It will be obvious that the greatest care must be exercised towards a minimum of loss and wastage.  I wish you to distinctly understand that your force is an entirely independent one and you will in no case come under the orders of any Allied general.”[8] With costly engagements at Mons and Le Cateau, French desired to pull the BEF from line of battle to refit over a period of ten days, even contemplating evacuation across the Channel, and Joffre could not compel him to do otherwise.

Likewise, Moltke was under tremendous strain.  German forces had covered a lot of ground in these crucial first five weeks.  Though, the further they advanced the more spread out and beyond easy reach from his influence they became; the men were reaching their physical limit.  The Germans were running out of time and the allies were running out of space.  Moltke’s armies would have to move on Paris, and Joffre would have to counter-attack before that happened.