Last week’s post, “Extended Family” which briefly investigated the essential nature of the regimental system has become one of this site’s most well-received essays.  With that in mind and that this past Friday, the 17th of October was the 123d anniversary  of the establishment of my Regiment, the 48th Highlanders of Canada, I’d like to continue my examination of this system which links and bonds present to past in a more intimately personal way.  Comments, questions and suggestions are always welcome, and this space can be followed through Twitter and Facebook.

On the evening of October 4th, I travelled into Toronto to attend, at St. Andrew’s Church on King St, a program of remembrance titled “Voices of War, Dreams of Peace.”  St. Andrew’s, founded in 1837 is stone building which has had the entertainment district of the city spring up around it.  The interior, with a huge cantilevered ceiling and a gilded, domed nave is about as ostentatious as a Presbyterian church is allowed to be.  During the war, 166 men, some twenty-five percent of the Church’s congregation volunteered for service overseas.  Twenty-eight never returned, but it struck me that the line from then to now is quite probably maintained by those present who descend from that congregation-as well as me by proxy of sharing a regimental link to many of those men.  The observance began on a solemn note with a reading from a list of the 28 parishioners who had died; all but one was younger than I am now.

Reverend Will Ingram, St. Andrew’s presiding minister told the audience that this event “Draws together significant strands and strains of the community,” that we should “consider the ways (the war) touched the congregation.  We as a nation are wrestling with our duality of a peaceful nature and war even now.”  Responsible for organising the event was the 15 Battalion CEF Memorial Project, who have sought to install plaques commemorating the Battalion’s efforts in Belgium and France in WWI.  It’s certainly no co-incidence that St. Andrew’s was chosen as the venue.  Not only has it served as the Regimental Church of the 48th, its members were instrumental in the founding of the Regiment in 1891.

A group of prominent Toronto businessmen with strong Scottish associations, including membership of St. Andrew’s had wanted to establish a Highland regiment as part of the Active Militia.  Earlier that year, these men formed a Regimental Committee, petitioning the government in Ottawa to authorise the formation.  To be named “The Queen’s Highlanders”, the Committee selected the Davidson tartan, a badge of a falcon’s head and the motto Dileas Gu Brath (Scot’s Gaelic for “Faithful Forever”) in honour of the family heraldry of John Irving Davidson, a Scots-Canadian banker appointed to be Colonel of the Regiment.[1] The name as requested wasn’t available and as such the Regiment was named numerically on its precedence of establishment-48th.  Authorisation was published in the Oct 17th 1891 edition of the Canada Gazette:  “Authority having been granted for the raising in the City of Toronto, of eight companies of Active Militia of the strength of 42 non-commissioned officers and men per company, to be formed into a Battalion wearing the Highland dress, the Deputy Adjutant General of Military District No. 2 will submit Service Rolls of those persons volunteering for service in those companies.”[2] 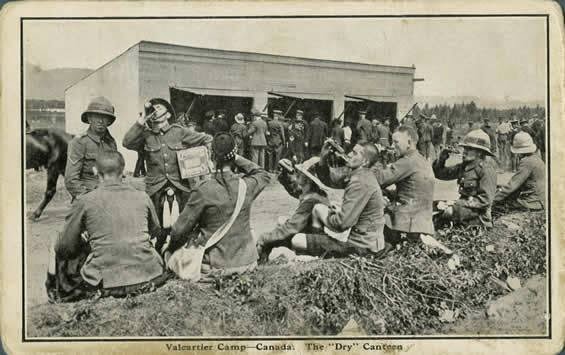 By 1914 the young Regiment had already established tradition and a growing reputation.  Reaching into the martial heritage of like units from the home country, a close link of its members to the city it was raised from and service in the overseas contingent in the South African War all ensured a unique identity.  Thus, when designated as the 15th Battalion at Valcartier, they eschewed the enforced numeration except for official purposes.  “In an example of the men’s resistance to the new system, many numbered battalions refused to mask their former militia names.”[3] It may seem presumptuous for a formation of only twenty-three years to cling to heritage; it actually speaks towards the Regiment’s established obstinacy, as illustrated in a photograph of 15 Bn men cadging beers outside of a dry canteen in the training camp.

Professor Tim Cook, on the nature of retaining Militia identity states that “Such allegiances were soon largely artificial”[4] due to loss of men in battle.  I challenge that.  Trappings and traditions generate a homogeneity which would integrate reinforcements into a cohesive structure.  The absence, through death and wounds of the progenitors of the old Militia allegiances in fact would help to strengthen the resolve and purpose of those following as an example to live up to, thus inspiring continued excellence in service in the field.

Second Ypres would be the first, the worst, but by no means the only challenge to maintaining this lineage. 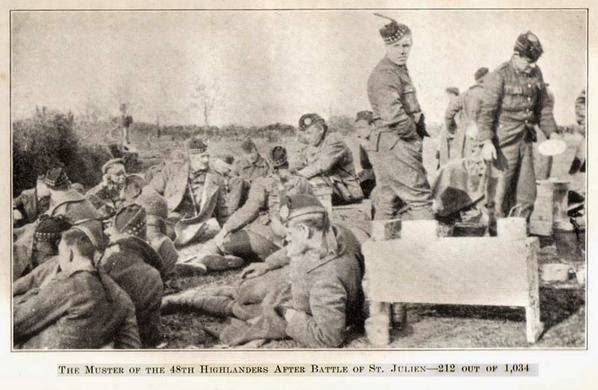 The Battalion War Diary for the 24th of April states, tersely “Enemy attacked our line of trenches; attacked front line, advanced HQ and St Julien.  Heavy casualties.”[5] A comparison of effective strength returns; that is those available to report for duty lists the numbers of 18 April as 27 Officers, 953 Other Ranks; for 25 April 3 Officers, 316 Other Ranks.[6] The Battalion was shattered in its defence of St Julien and desperate hold of the line in the face of chlorine gas and dedicated German attacks.  The men’s Ross Rifles had failed, Colt machine guns had overheated but they had carried on regardless, and mostly leaderless.  To have done otherwise would have been a disservice to the traditions so strongly held.  The centre line at 2nd Ypres wasn’t maintained because the consequence of failure would allow a German breakthrough, but because the men of the Battalion wouldn’t let each other down.

The Battalion was first reinforced by “holding companies” which had been left in England, and received 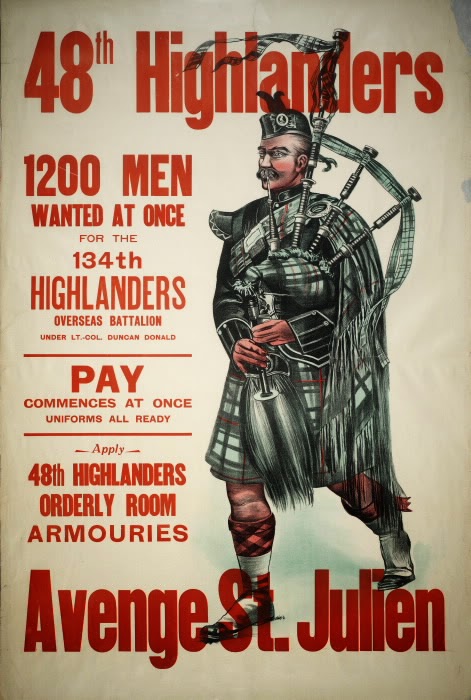 further reinforcement throughout the remainder of the war from the 92nd and 134th Battalions which had been raised in Canada as subsequent Battalions of the parent regiment.[7] All of these subsequent reinforcements would wear the same tartan, display the same badge and be held to the same motto.  It would, time and again, rebuild and carry on in the same spirit, accumulating twenty-one battle honours throughout the war.

The 48th continued in its own way to establish itself beyond its reputation in Flanders hard won.  During the Second World War, with service in Italy and Northwest Europe a further twenty-seven battle honours would be bestowed, along with the nickname “Glamour Boys” for the often noted big city swagger brought to British dance halls.  Today, our slightly cheeky rakishness has lent to a less polite sobriquet, often muttered in exasperation “The F-in’ Forty-Eighth.” The Regiment has continued in their legacy with members serving in Korea, West Germany, Peacekeeping Operations, Afghanistan and several emergency responses domestically.

Historian George Beal sums up what composed the Regiment and what continues to hold it together in this thought “What has made the Regiment?  What has seen it grow and succeed throughout the years?  Two attributes are the foundation, volunteers and family.”[8]

I am honoured to count myself among individuals such as these.