It is Thanksgiving in Canada this week, a time for reflection on the things for which we are grateful.  I am personally grateful for my family, and as I feel I will illustrate below, that is inclusive of far more than relations of blood and marriage.  With apologies for not posting last week, due to a minor surgery for which I took time to recuperate, expect to see new content here each week. Comments questions and suggestions are always welcome; please forward them to me through this space or by following on Facebook and Twitter.

The concluding part of the recent series on the formation of the Western Front looked at the role that the First Battle of Ypres played in the unfolding events.  It is hoped that the absolute desperation and near destruction of the BEF was expressed clearly.  For it was at Ypres that the culmination of two months’
campaigning had brought the British to a critical point.  Perhaps a good question to ask and shall be examined here is what prevented the British Army from total collapse in morale and effectiveness.  It is, in answering, to be found more a matter of sociology than psychology.

“First Ypres,” says historian Basil Liddell Hart, “on the British side, was not merely a soldier’s battle but a family battle- against outsiders....when formations were broken up and regiments reduced to remnants, those remnants still held together....After the battle was over, little survived, save the memory of spirit.”[1] A key word in Liddell Hart’s observation is “regiment”; and it is this type of organisational system- often misunderstood or misrepresented, that screwed men’s courage to the sticking place. 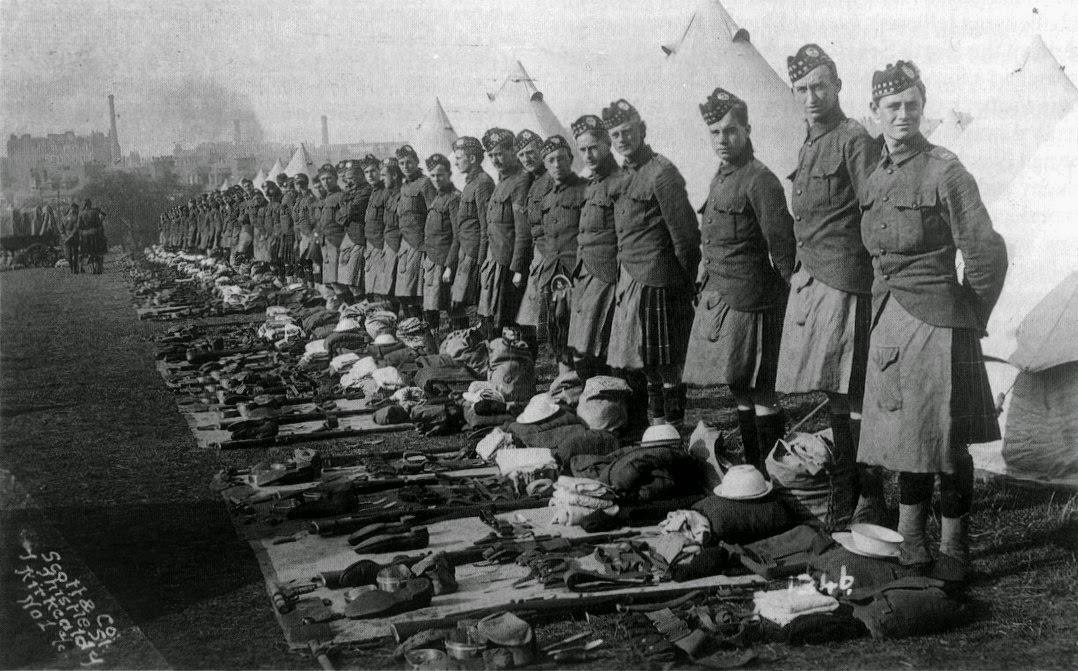 The regiment, strictly speaking as a form of military organisation, has a particularly long history, and is a body of men comprised of a number of battalions, structurally below the level known as a brigade.  However, that is far too simplistic a definition; and can even be a bit confusing.  Regiments which have multiple battalions will often have one of these battalions formed with others from separate regiments to make up a brigade.  Within the British Commonwealth, it is more fitting to view the regiment as more of an entity rather than a set number in an organisational table.  Richard Holmes explains on the development of the modern regimental system “To boost recruiting...enhance the status of the soldier in society, and create a system which would link battalions serving abroad with their training and recruiting bases in the United Kingdom, the old numbered regiments of the line, with loose regional affiliations, were combined into county regiments.”[2]

Being set up in a geographical fashion can engender a strong tie between the regiment and the community from which it comes, often adding much to a particular sense of identity, not to mention that the men within would probably have social connections outside of their military association. “On the other hand, recruitment from a single community can lead to a concentrated and potentially devastating local impact if the regiment takes heavy casualties.” [3] One need only look at the devastating loss, still commemorated today of the Newfoundland Regiment on 1st July 1916 for a particular example of how tight geographical recruiting and association can have such an adverse effect.

Within this system, it is a regiment the individual joins when volunteering for the army.  High minded ideals and patriotism may be sufficient inspiration to get a man to the recruiter, but usually aren’t enough to be continually inspirational.  The regiment, due to its size and structure is less abstract than higher military formations and can offer a sense of belonging, of common purpose beyond national allegiance, “No one risks their lives for abstract things.”[4] The bonds formed by men in their training while being indoctrinated into a well established structure means that support in disagreements in the barroom can be transmuted into devotion on the battlefield.

Each regiment, while having commonalities which link it to others within the same national force has within itself unique symbology- in distinctive badges, headdress or uniform- and its own history and traditions which furthers the familial aspect.  “We are all familiar with the need of families to live together in clearly defined territories of dwellings; to take their meals together in a well defined routine; to freely communicate under well established rules; to share a common set of ethics developed in a well thought out doctrine; and to remember various family deeds, birthdays and other emotional celebrations in a well balanced program of work and play. These and other institutions and practices are required to preserve and maintain a healthy family life.”[5] A soldier is led to believe that his regiment is best- an attitude which is actively encouraged.  This may set a negative pretext for rivalries among regiments, but generally the effect is that in which if a man believes he is part of something highly valued he can be relied upon to perform as such. 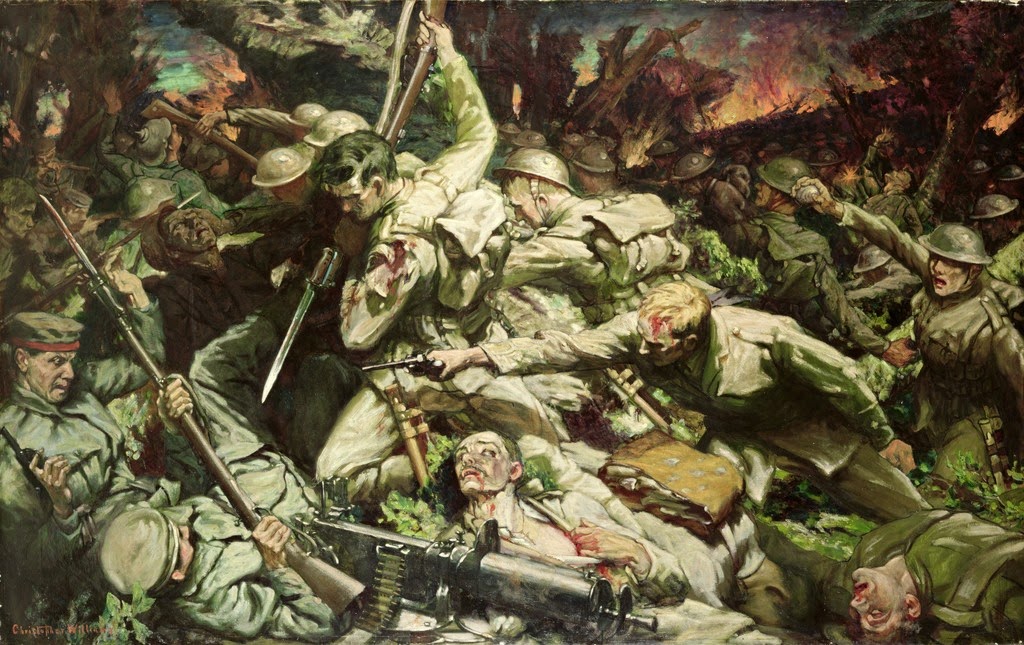 Rigid and pseudo-familial structure may instill an inflexible class structure which seems out of place in an egalitarian society, but it is a definite requirement to the maintenance of stiff discipline under extreme conditions.  “The ‘thin khaki line’ withstood a strain that lasted for weeks compared with the hours of the past.”[6] Liddell Hart credits the BEF’s battlecraft, particularly marksmanship coupled with high morale as the decisive factors to victory at 1st Ypres.  In a treatise on the regimental system, BGen DG Loomis corroborates these ideas: “In our volunteer force of citizen-servicemen the essentials of democracy have been maintained in our infrastructure (of) messes and institutes as well as our special culture of customs and procedures which cut across the formal lines of responsibility required for instant reaction under fire. In battle most effective combat units are those in which the social pressures generated by our mess and institutional life are blended with the military authority of our chain of command to form the right amalgam needed to master the situation of the moment.”[7]

“In Canada, the regiment is a formation of one or more units; existing almost exclusively for reasons of heritage, the continuance of battle honours and esprit de corps. Most Canadian infantry regiments are reserve units composed entirely of one under-strength battalion of between 100-250 soldiers. The three regular force infantry regiments each consist of three regular force battalions of approximately 600 soldiers, in addition to one or more reserve battalions. Canadian battalions are employed tactically and administratively within mechanized brigade groups for regular units, or light brigade groups for reserve units.”[8] Many of the pre-war regiments of the Active Militia which were to become part of the Canadian Expeditionary Force in the First Contingent lacked requisite numbers to form full battalions.  As a result, and as part of a notion by Sam Hughes, Minister of Militia, to form an overtly Canadian force, regimental identities were disallowed, and battalions were organised with no reflection of regimental heritage.  A badge, in the form of a maple leaf embossed with the battalion number would become a rather generic identifier.  While the result of this was largely positive- inspiring men to think and identify in a more national sense than regional, it also casually discarded the benefits which come with a strong link to tradition and heritage.  This line may well be a farther reach than the young history of Canada allows as many of the country’s regiments take homage, name and tradition from existing British units.

Not having strong ties to tradition and memory but unifying the Force under a national identity may have proven a positive influence in the long run, but certainly missed an opportunity to use the resources a strong 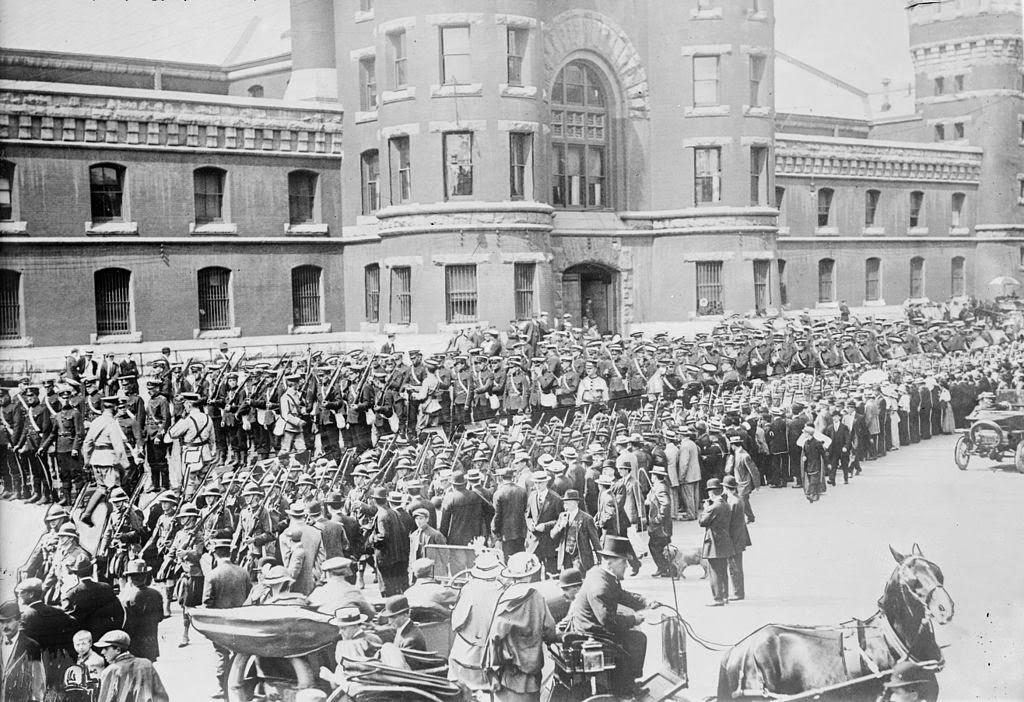 social bond the regimental system creates. While the lack of a long history within the newly raised, generically numbered battalions of the CEF can’t be conclusively applied as reasoning for confused performance at 2nd Ypres, it’s presence in some battalions may be indicative of the stalwart defense of the collapsing line.  The 15th Battalion was one of the few formations in the First Contingent which was formed using members of a single Militia regiment.  They disdained the generic badge and an officers’ council elected to retain the Highland uniform and traditional identifying badges off the parent regiment, the 48th Highlanders.  As such, with strong bonds of lineage, it can be deduced that the 15th Bn held the line for the same reasons their British counterparts had done six months prior, evidenced even further by “C” Company holding out to the last man in order to allow the other companies to redeploy.  The 15th’s stand had slowed the German advance and had bought time to form a secondary line of defense.  It cost the battalion the entire compliment of “C” Company, mostly as prisoners.  All told, the 15th lost 647 casualties, the worst single day’s loss by a Canadian battalion in the entire war.[9]