For Bravery in the Field

In a war where battles were waged over weeks and months, a subsidiary action can all too often be 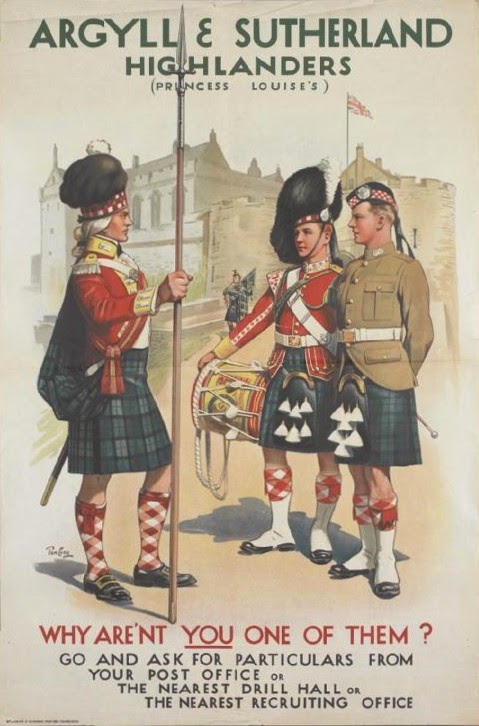 overlooked.  This is particularly true if the fight gained little, was inconclusive or considered a loss.  Oversights in this regards might be common, but it does tend to complicate matters when trying to find details relating to the actions or movements of a single person.  With last week’s post having been so well received, I had hoped to repeat that success with another story of personal courage.  What I really wanted was to find more details on my great-grandfather, Sergeant John Harvie of 2nd Battalion, Argyll and Sutherland Highlanders.

I’ve known that he was a recipient of a decoration for bravery at some point in WWI.  My own research has turned up that Sgt Harvie (at the time, Corporal) was listed on page 6830 of a Supplement to the London Gazette, 9th July 1917: “4/9742 Cpl J Harvie, A &S Highrs” awarded the Military Medal.[1] The Military Medal (MM) was created during the war, instituted on 25 March 1916.  Specifically, it was to recognise non-commissioned officers “for gallantry and devotion to duty when under fire.”[2] Not quite as prestigious as the Victoria Cross, 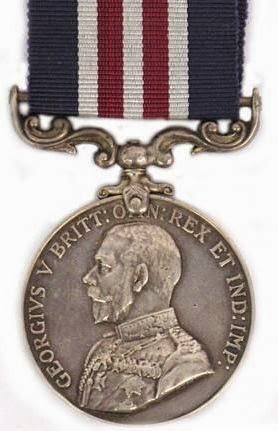 the MM was an effort to ensure extraordinary acts which may not have been to the very exacting standard required by the highest level of decoration were nevertheless brought to notice.  Finding out exactly what Cpl Harvie did to earn this honour is lost to history.  Unlike higher awards, the number of MM’s issued and a shortage of paper meant that the medal was not presented with a written citation.[3]

The best I’m able to do is form a general idea of the overall situation for the day Cpl Harvie was most likely to have performed his notable act.  A difficulty within that is it very likely occurred during one of the subsequent actions which filled the void between the major battles and campaigns of the war. “Arras was a major Allied offensive, fought in the spring of 1917. Falling chronologically between the much higher profile battles of the Somme in the second half of 1916, and Passchendaele (or Third Ypres) in the second half of 1917, Arras today is not a battle that is particularly well remembered. The battlefields also are much less known than those of the Somme and Flanders, and are less visited.”[4]

Arras had been planned well in advance, in cooperation with the French.  A hero of the desperate Battle of Verdun in 1916, General Robert Nivelle had gained command of the French Army and boasted of a devastating offensive to be begun in the spring of 1917.  The British holding Nivelle’s left flank through the Ypres salient would support this offensive by keeping the Germans opposite them under pressure and thus unable to reinforce the units falling under Nivelle’s attack. General Nivelle had convinced the British Prime Minister, David Lloyd George in January during a military conference in London that diversionary attacks by the British were required for his offensive to succeed.[5] Part of this effort would include the Canadian Corps attack on Vimy Ridge.  In planning these operations, Field Marshall Sir Douglas Haig noted “Prior to our offensive, the new German lines of defence on the British front ran in a general north-westerly direction…. Thence the German original trench systems continued northwards across the valley of the Scarpe River to the dominating Vimy Ridge, which, rising to a height of some 475 feet, commands a wide view to the south-east, east and north….The front attacked by the Third and First Armies on the morning of the 9th April extended from just north of the village of Croisilles, south-east of Arras, to just south of Givenchy en Gohelle at the northern foot of Vimy Ridge, a distance of nearly 15 miles.  It included between four and five miles of the northern end of the Hindenburg Line, which had been built to meet the experience of the Somme Battle.”[6] These new defenses were known to the Allies as the “Hindenburg line.”

On the Western Front, German forces of roughly two and a half million men organised into 134 divisions 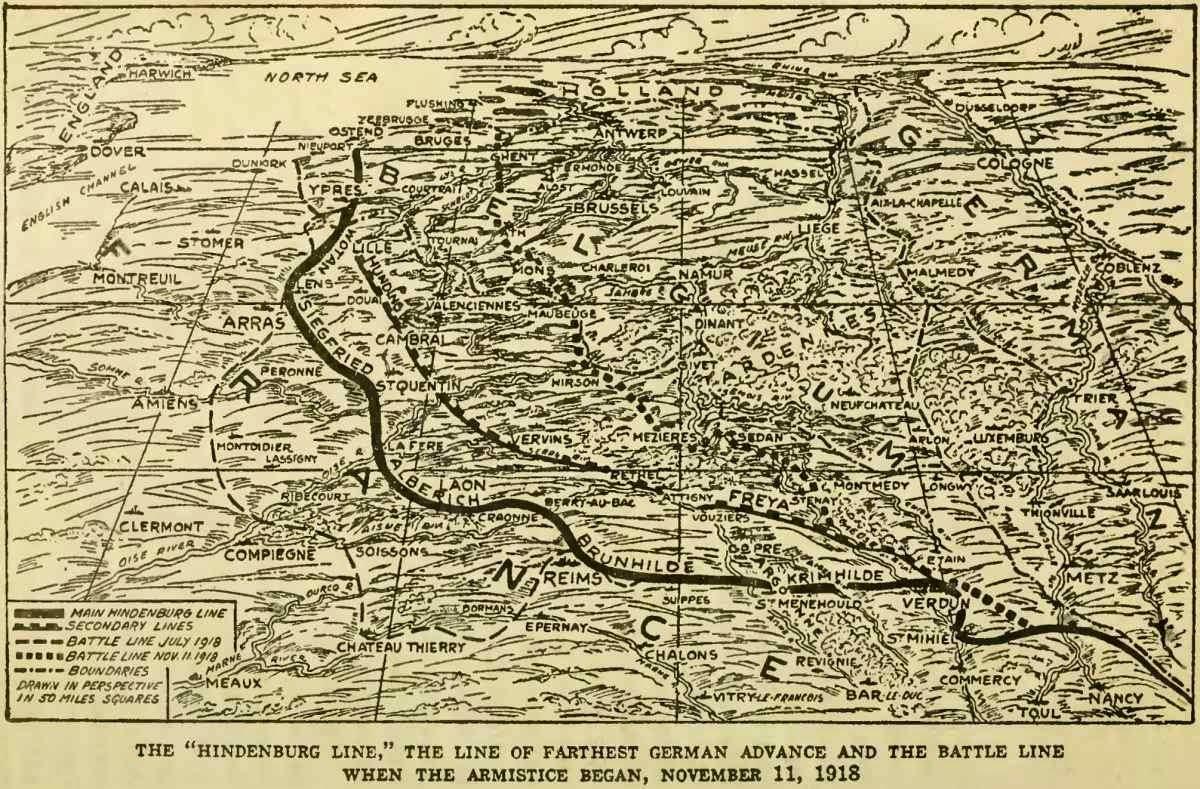 faced combined Allied forces 175 divisions strong, numbering nearly four million men.[7] "The creation of the new line would also enable Ludendorff to install, from scratch, the kind of physical infrastructure needed for a new kind of defence.  Under his new approach, there was no longer to be a German front line in the traditional sense.  The now-customary continuous line was replaced by small, mutually supportive steel-and-concrete camouflaged blockhouses laid out in a checkerboard pattern and manned by machine gun crews"[8] These constructions were fronted by vast ditches as a countermeasure for tanks and several tens of yards of wire obstacles.  The blockhouses would absorb the initial brunt of an attack, but were to be abandoned prior to being overwhelmed.  The line to be moved back to under pressure was a true trench line, but lightly held.  The majority of reserves were units particularly trained for rapid counterattacks.  Before the enemy could consolidate any gains, these "storm troops" would push them out when the attacking forces were at their most vulnerable.

The Arras diversion being planned over a number of months allowed ample time for training the attacking troops to a proficient standard which had not been possible to achieve in other battles earlier in the war.  Haig continues:  “The attack on the front of the Third and First Armies was planned to be carried out by a succession of comparatively short advances, the separate stages of which were arranged to correspond approximately with the enemy's successive systems of defence.  As each stage was reached a short pause was to take place, to enable the troops detailed for the attack on the next objective to form up for the assault.  Suffice it to say here that this system consisted really of several systems of trenches, strong points and tunnels, protected by vast networks of wire.”[9]

Because of this, the initial phases of Arras, including Vimy, were incredibly successful.  Failures in follow-up and a complete rebuff of Nivelle’s main attack quickly ground all offensives in the West to a standstill.  Haig still had ambitions for an enveloping assault.  The Field Marshall and his staff “developed a plan of their own, one that would combine a new offensive out of the Ypres salient with an amphibious landing and unhinge the German position in Belgium….they may even be forced back from the Hindenburg Line.”[10] 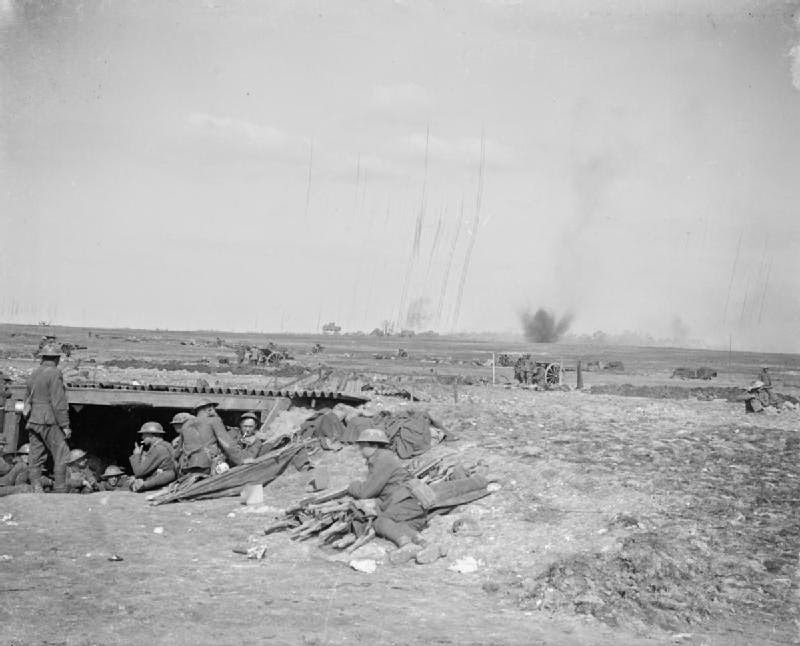 It’s here that smaller, more limited assaults were conducted, in the hope to give the British forces the best possible positions to renew the offensive, scheduled to begin in the autumn as the Third Battle of Ypres, more commonly known as Passchendaele. Within this period of positioning attacks, Cpl Harvie received his MM.  Based upon other accounts, it’s reasonable to place the exact date at the 23rd of April, 1917.  Two battalions of the British 33rd Division 2/A&S H being one of them were tasked with gaining a portion of the Hindenburg line near the River Sensée.[11] This attack did not go well.  “The enemy began to infiltrate the two battalions’ lines even as they moved towards the river.  One company of each battalion was cut off and recue attempts failed.”[12]

Small parties of men were on their own and without support.  Some tried to move back towards British lines, others were surrounded and either reduced or taken prisoner.  These clusters of Highlanders were desperately fighting for their lives.  Amongst them was the remains of the company under the command of Acting Captain Arthur Henderson which “was suffering heavy casualties and was being attacked from the rear as well.” Captain Henderson, who only recently had been attached to the 2nd Battalion from the Argyll’s 4th Battalion, had already proven himself in combat.  His permanent rank was 2nd Lieutenant, his temporary promotion a reflection of his capability which had also seen his winning of the Military Cross.

Without any help, his remaining men wouldn’t last where they were, and with Germans working their way in 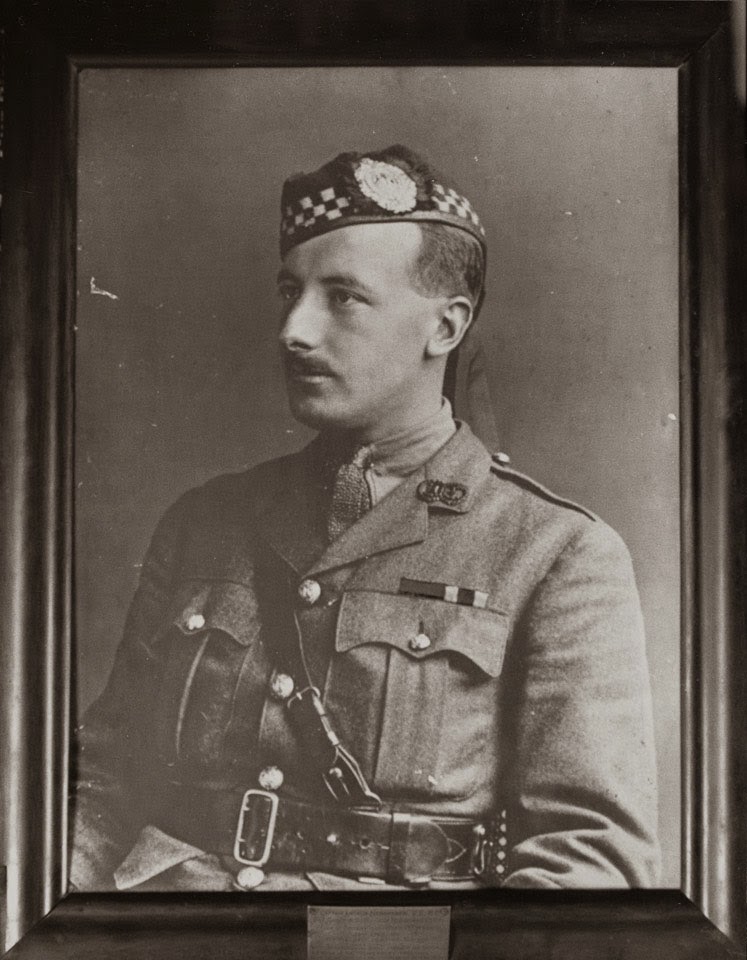 behind, falling back was just as dangerous as moving forward.  Captain Henderson had determined what had to be done.  He ordered bayonets fixed.  Despite being terribly wounded in the left arm, Captain Henderson led his men in a charge against the enemy trench, “through the front enemy line until he gained his final objective.  He then proceeded to consolidate his position, which, owing to heavy gun and machine gun fire and bombing attacks, was in danger of being isolated.  By his cheerful courage and coolness he was enabled to maintain the spirit of his men under most trying conditions.”[13] For these actions, Captain Henderson would be awarded a Victoria Cross. It would be posthumous; his VC citation notes that he – “was killed after he had successfully accomplished his task.”[14] His medals are now on display at the Lord Ashcroft Gallery in the Imperial War Museum, London.[15]

Cpl Harvie may or may not have been with Captain Henderson, but he was most assuredly part of that days attack. His inclusion in the London Gazette for the MM is coincidental with Captain Henderson’s VC citation.  This pocket battle, known as the 2nd Battle of the Scarpe was concluded the following day.  British commanders determined not to push forward in the face of stiff German resistance.