In August of 1914, as it was announced that Canada was at war, one distinct group answered the call to arms in surprising numbers.  First Nations’ peoples provided no shortage of volunteers for the expeditionary force being prepared for service overseas.  “Close to 4,000 members (of the CEF) were of Aboriginal descent,”[1] according to the Canadian War Museum, or about one percent of all volunteers.  In all, it is estimated that “35 percent of the eligible Indian population of Canada had enlisted.”[2] This is above the national average of 30 percent fro men of military age who would serve in the war.  “The Aboriginal response was remarkable….Some communities saw every man between 20 and 35 years of age volunteer.”[3] What makes this so noteworthy is that this level of commitment was “an astonishing number given the limited civil rights accorded to Canada’s First Peoples in the early Twentieth Century.”[4]

At the beginning of the 1900’s, First Nations people were not granted the same rights of citizenship as other Canadians.  In fact, their status under the federal government was more comparable to being wards of the state than free individuals.  It might seem odd that so many would choose to give themselves to military service for a country which didn’t view them as equals.  Even more intriguing is that those First Nations people who did volunteer did so in spite of a government policy which guaranteed no native person would ever be compelled to give military service.  No policy existed in Canada for the encouragement of Native volunteers.  The reasons for this were several.  One was that because “Canadian Aboriginals were not white, they would not be protected by European ‘privileges of civilized warfare.’”[5] Also, the government felt bound by the treaties which precluded enlistment of Native men for foreign wars; the desire to use Native forces for home defence or the very real concern that “recruiting Native soldiers could enhance the claims of many of their communities for greater sovereignty.”[6] 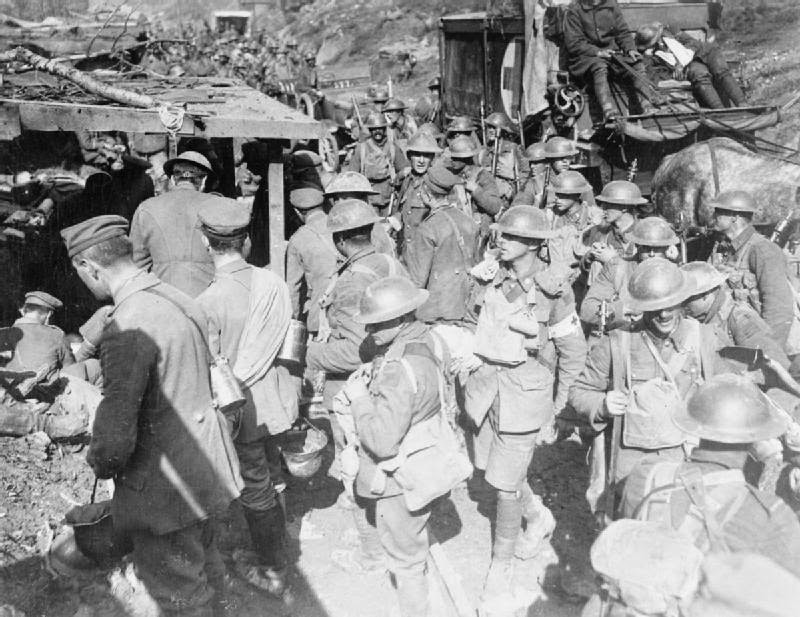 Quite often, the reasoning is given that such volunteerism is intrinsic to the culture and traditions of a warrior people, as historian James Dempsey puts it, “The Blackfoot Nation, for example, believed the age old saying ‘It is better for a man to be killed in battle than to die of old age or sickness.’”[7] This is a very narrow and perhaps stereotypical point of view, nor would it be exclusive to Aboriginal people.  Scottish warrior tradition, for example, holds quite a similar ethos.  Practically, the reasons for getting involved in the war were just as varied for First Nations as the motivations behind other Canadians volunteering.  Historian Janice Summerby is quoted in a Canadian Forces article as saying “In newspaper interviews, oral histories, biographies, and other published works, Aboriginal veterans – not unlike other war veterans – speak of the call to adventure, the attraction of regular pay, and the desire to follow friends and family into service.”[8] Of course, these reasons don’t much explain the paradox between restrictive treatment from the Canadian government and the desire to serve in the war.  Dempsey explains that for many Native bands, the belief was their allegiance was owed directly to the British Crown, with whom the treaties had been made; superseding the federal government and as such the duty lay with protecting the interests of Victoria’s inheritors.[9] Again, this is not much different from the loyalties of the large number of Canadian volunteers who had been born in the UK.  “Chief F.M. Jacobs of Sarnia wrote to D.C. Scott that his people were willing to provide ‘help toward the Mother Country in its present struggle in Europe. The Indian Race as a rule are loyal to England; this loyalty was created by the noblest Queen that ever lived, Queen Victoria.’”[10]

Another common misunderstanding lies among how First Nations’ soldiers were employed on the battlefield.  “The lore of the war maintains that Aboriginal soldiers particularly distinguished themselves in dangerous but essential infantry roles. Accounts of individual gallantry abound….Several themes clearly emerge. First and foremost, Aboriginal soldiers were lauded as effective snipers and scouts.”[11] The reality was that First Nations soldiers “could be found in pioneer, forestry, and labour battalions, and amongst the Railway Troops, Veterinary Corps, Service Corps, and the Canadian Engineers.”[12] No occupation was barred to them, and several served in the Royal Flying Corps. 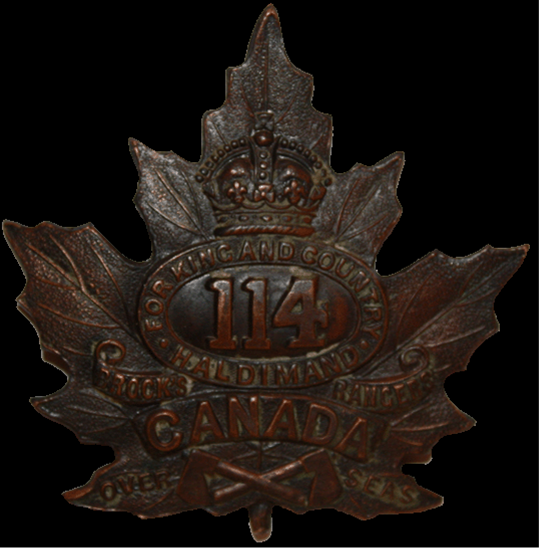 Of infantry units, however, was the notion that a Native contingent be organised.  This very nearly occurred.  Several bands had formed militia units in the decades prior to the war, such as the 37th Battalion, the Haldimand Rifles from Brant County Ontario.  The 37th drew strength from the Six Nations’ Reserve in the country, and members of the Haldimand Rifles in part formed the 114th Battalion, CEF “Brock’s Rangers.”  “Strength of the 114th was approximately 1000 men; about half were Six Nation Indian.  There were some Indian soldiers from Caughnawaga, from St Regis, and from Manitoulin.”[13] Two companies of the 114th “were composed entirely of Indians, including officers.”[14] Their motto was “For King and Country” and the battalion adopted a crest featuring two crossed tomahawks.[15] Unfortunately, the 114th would not go into the field as a whole battalion.  On arrival in England in 1916 it was broken up to provide reinforcement to units already at the front, most going to battalions in the 4th Division.[16] This was not a denial of Native unit solidarity so much as the necessities of providing adequate numbers to replace casualties in deployed battalions. 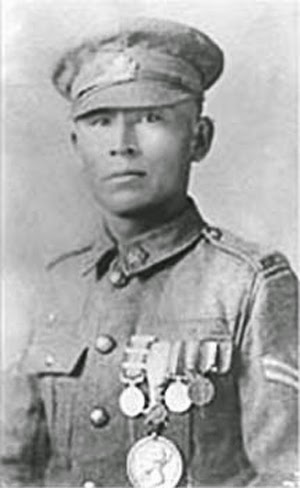 Many First Nations men served with distinction, and quite a few were recognised with medals, though no First Nations man would receive the Victoria Cross.  “First Peoples troops left a remarkable record of wartime accomplishment….At least 50 were decorated for bravery on the battlefield.”[17] An Ojibwa from Parry Island, Corporal Francis Pegahmagabow, who went by the nickname “Peggy”, was the “most highly decorated Canadian Native in the First World War.”[18] Among his decorations was the Military Medal with two bars, meaning his actions were sufficient to be awarded this medal for bravery three times.  This is such a rare honour that he shares the accomplishment with only 38 other members of the CEF.  Cpl Pegahmagabow’s first MM was one of the first awarded to a Canadian in the war, for “disregard to danger and faithfulness to duty”[19] while acting as a messenger in February 1915.  The subsequent awards were for delivering crucial battlefield information during an attack at Passchendaele in 1917; and going out under heavy enemy fire to bring back ammunition to his company “in danger or being surrounded”[20] in 1918.

The highest single decoration awarded to a First Nations soldier was the Military Cross.  One such was received by Captain Alexander George Edwin Smith of the Six Nations Reserve.  The MC is a citation for bravery for officers second only in order to the Distinguished Service Order and the Victoria Cross.  Captain Smith had been a member of the 37th Haldimand Rifles and then part of the 114th.  When it was divided to provide replacements, he was assigned to Number 4 Company, 20th Battalion.  On September 26th 1916, the Battalion war diary records “At 5pm our Bn received orders to move forward….The progress was somewhat slow on the left owing to MG fire from STUFF REDOUBT.  At about 6:30 pm our No 4 Coy was sent up in close support of the 8th Bn.”[21] Smith and his men moved forward against German fire from a well defended position. Wounded, and twice buried by shellfire, he “proceeded with a party of bombers and captured an enemy trench and fifty prisoners, displaying the greatest courage throughout.”[22] 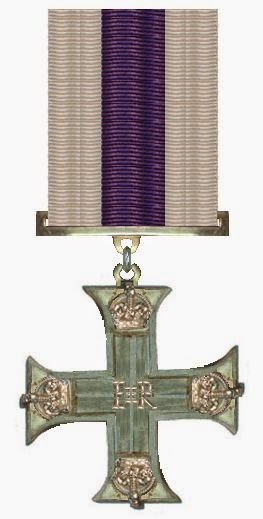 Mabel (his wife) that I was awarded the Military Cross for bravery and gallantry on the field of the greatest battle the world has ever known.  Don’t forget to tell Donnie and Harold what God had enabled me, their papa to go through and do.”[23] He concludes his letter lamenting that his mother had not lived to see him do well in battle and not be thought a coward.

Circumstances of Canada’s war continued to affect First Nations’ communities.  When, in 1917, voluntary enlistments were not sufficient to keep pace with battle losses, the Military Service Act, conscription, was introduced.  For Aboriginals, this Act was contradictory to the prior treaties which guaranteed they would not be compelled to take up arms.  Opposition to the MSA was based upon the fact that Native people did not have the full rights of citizenship.  Many letters and petitions stated that First Nations people would gladly subject themselves to the Act if, by nature of having the same rights as did other Canadians, they would therefore be just as responsible for Canada’s defence.[24] The result was an exemption for Status Indians from the MSA, rather than a change of policy towards the people. The necessity of retaining a majority government for Prime Minister Borden’s Conservative party, and thereby preserving the controversial MSA inspired the Military Voters Bill. In giving the vote to all serving and discharged members of the CEF, “Indian soldiers could vote without the fear of losing their status. Therefore, military service became a way around the Indian Act and was a step towards getting the franchise for all Indian people the contributions of Indians in the war were comparable to those of other Canadians.[25]

Little doubt exists that some First Nations men intended their service in the war to be counted towards more equitable treatment of their people afterward.  “It was thought that their service would accord them many of the rights and entitlements held out to their non‑Aboriginal comrades, but such was not the case.”[26] Progress in this regard was slow, or nonexistent.  Returning First Nations veterans did create “many Aboriginal lobbying groups…who sought redress for those grievances. It also saw an increase in Aboriginal veterans assuming leadership roles in their respective communities.”[27] This leadership helped ensure that First Nations efforts in “the war herald a broader breakthrough in civil liberties for First Nations.”[28] After serving for nearly the entire war, “Francis Pegahmagabow became politically active in the protection of their communities and the advancement of First Nations rights.”[29] His reputation and family lineage allowed him to become following in the chief of the Parry Island Band and later a councillor. A member of Canada's Indian Hall of Fame, Pegahmagabow died on the reserve in 1952.