A Netherworld of Shell-Scattered Turf 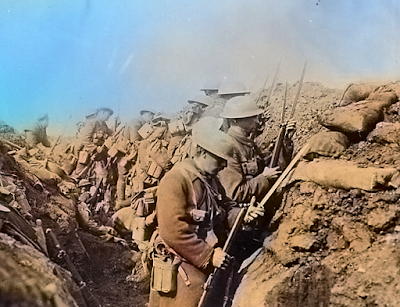 Just as the first three divisions of the Canadian Corps were removing, one at a time, and each of these one brigade at a time from the Ypres Salient, the same process was happening in reverse with the final division to join the Corps, the 4th Canadian Division.  A single, straightforward sentence noted in its war diary marked the opening of Major General Watson’s Divisional Headquarters.  The division had already begun placing its brigades in line, overlapping the outward rotation of the 2nd Division, giving the new troops a few days to learn while doing, under the supervision of experienced men and officers.  In one case, the 46th (South Saskatchewan) Battalion, 10th Canadian Infantry

Brigade, placed its ‘A’ Company in reserve lines for instruction with the 18th Battalion on the 13th of August; moving into the firing line two days later.  They were followed in succession by ‘B’, ‘C’, and ‘D’ Companies, each one spending no more than a day at the forward most positions before passing back through support and reserve trenches, incurring the battalion’s first casualties in the process.  After these single company rotations from 15-18 August, 46th Battalion made a complete relief of the 18th on the 22nd- placing two companies, ‘A’ and ‘B’ along a lengthy frontage which was now the battalion’s responsibility alone.[1]

They had inherited a nightmare no amount of training could have prepared them for.  Assurances that Ypres was a “quiet” section of the Front would have immediately been given the lie.  This was ground fought over for so long that it had lost any aesthetic which would give reason to why it was being fought over, with the exception of the existence, mere handfuls of yards away, of men whose sole purpose was the eradication of their existence.

Artillery had been consistently active, at intervals.  The 10th Brigade logged in its first daily intelligence summary that, on the 25th, the Germans shelled their front line positions and communication trenches with 77mm and 5.9” shells for just over an hour in the late morning and again in the early afternoon.  Before the changeover with 4th Division, snipers of the 2nd Division had been doing a brisk trade with daily claims of kills and destruction of trench periscopes.  At night, enemy rifle and machine gun fire was more frequent, the Germans making use of “travelling searchlights…to assist M. Gun Fire.”[2]  Their primary object would be to play light upon parties working out in No Man’s Land; those attempting, as best they could manage, to repair wire and other defenses.  Catching a scouting patrol in their bright beam and stitching through them with a heavy burst was a hoped for target of opportunity.  This, among a great many other concerns most likely occupied the thoughts of Lieutenant Reginald Percy Cattell on the night of 25th August.  Responsibility had fallen to this young officer, only having turned twenty-two at the top of the month, to lead the first patrol of the war for the 46th Battalion.  He and his fifteen men, sneaking out into this netherworld of shell-scattered turf were among the 4th Canadian Division’s initial efforts in the conflict they had only just arrived to.  Lt. Cattell had been serving with the Active Militia in Canada since April the year before, taking time away from his accounting job in Woodstock, Ontario.  Like many of his compatriots, he was not Canadian born, but rather, of English background.  In fact, he had a direct connection to France- he’d been born in Paris.

This patrol would prove a valuable experience, if not uneventful.  It is, in reality, most desirable for patrols to lack excitement or agitation on the part of the enemy.  Lt. Cattell was able to corroborate other reports on the condition of the German wire; that the enemy had cut and cleared the grass in front of their trenches to provide clear fields of fire and seemed to be more active in support and reserve trenches- only keeping a minimum of manpower in the firing line.[3]  It may have seemed a curious change, and other than it being noted in an observational sense was not accorded much consequence. 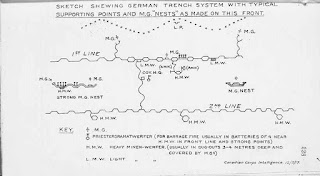 What Lt. Cattell’s patrol, and others like his were witnessing was the beginning of a shift in German defensive doctrine which would come to be known as “elastic defense.”  Lightly manning the forward most defences with intersecting machine guns was considered adequate to break up the cohesion of an infantry attack, which would be drawn into a counterattack zone beyond the protective cover of their offensive artillery and be overwhelmed by fresh troops deploying from positions well in rear of the forward lines.  “The German regulations did not give a specific name to this defense, but the term ‘elastic defense-in-depth’ is probably the best brief description.  The echeloning of forces provided the depth, the reliance on counterattack (instead of fixed positions) provided the elasticity.”[4]

This doctrine was an idea just beginning its implementation when the 46th Battalion first took the field in August of 1916; it would be nine months before they would really see it in action.  In the autumn, they’d be fighting at the Somme, where Lt. Cattell would distinguish himself, gaining his C.O.’s notice for “fine work…where he participated in the capture of the East portion of REGINA TRENCH.”[5]  He would continue to lead dangerous patrols and raids, suffering a slight wound on a successful sortie mid-September[6], and earning the Military Cross in January for a daring job during the work-up to the Battle of Vimy Ridge.  “He organised and led a most successful raid against the enemy’s trenches, demolished a mineshaft and inflicted many casualties.”[7]

Early in May of 1917, he was, with his ‘D’ Company, being held in a reserve position, and prepared to support ‘B’ Company’s effort to secure a stretch of the German line.  Here, now, nine months beyond the first intimations of elastic defense, the 46th and 47th Battalions would see it in practice.  Initially, the attack, begun at 9:45 pm 5th May 1917 met little resistance and gained the objective with a level of ease not familiar to men who’d been fighting a resilient enemy for the better part of a year.  “During the night,” however, “the enemy made persistent efforts to eject the party from (their) established post.”[8]  Continual counterattacks and consistent shelling placed the attackers in peril.  The fighting became bitter, tough and hand-to-hand.  Casualties on both sides mounted.  At one point, the Canadians were forced back from the ground they had won.  Rallied by the officer on the ground, Lieutenant Johnston, these men of the 46th waded back into the steel and “drove the enemy back.”[9]

Holding as best he could, Lt. Johnston, at 11:00 sent a request for reinforcements.  The reserves, men of ‘D’ Company, a platoon from 50th Battalion which had been seconded to provide support and four Lewis gun teams were sent forward to help shore up ‘B’ Company’s tenuous position.  Their help was well received as the Germans continued to make attempts to reclaim the strip of territory which had been wrested from them.  Attempts were made to infiltrate the Canadian position by moving from the cove of shell holes. Trench mortars and SOS artillery fire crashed down on the interlopers, whose own guns were dropping short on what had belonged to them only hours ago.  “The original German front line has been blown in in many places and is in no shape for holding,” reads one report.[10]

When morning broke on the sixth of May, the battle had waned.  Despite ferocious counterattacks, the objective was still in Canadian hands, at a cost of nineteen men killed, five officers and fifty-one men wounded; and the loss of a brave and competent officer, Lt. RP Cattell MC; who had been killed at some point during the night in the rush to support his embattled comrades.[i]

Lt. Cattell lies buried at Villiers Station Cemetery, not quite 200 kilometers from where he had been born.   His sister, Marie, had requested his headstone bear the epitaph, “While Life Lasts, I’ll Remember.”[11]

For -ONE DAY ONLY- Monday August 22

“Killing is a Sin: A Novel of the First WorldWar”

Moments before the men of Six Platoon 'B' Company, King's Own Canadian Scots Regiment will go forward to assault Vimy Ridge, each one of them must reconcile themselves to their probable fate. Felix Strachan, a teen-aged corporal about to lead his men into battle, has already seen a lot of this war; its arbitrary cruelty to life. In the past eight months he's been fighting in France, he's lost friends and a little of his faith in mankind, though nothing has bothered him more than the death of a stranger- a transferred officer left on the field after a failed patrol. Not only can no one seem to remember who the officer was, his death may not have been at the enemy's hands. Felix, in the seconds before Zero hour tries to come to terms with a question he has held for as long as he can remember- "What does it mean to die well?"