By No Means an Idle Task 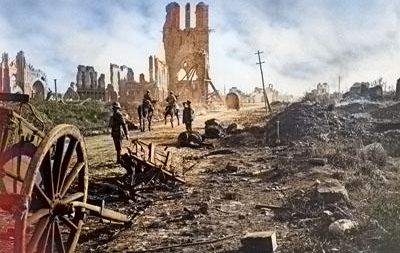 In the depths of August, very little change in situation along the Ypres Salient was appreciable.  Opposing lines remained, more or less, as they had been following the “hard and determined fighting”[2] over Mount Sorrel in June.  A major difference in the latter weeks of 1916’s summer was that the Canadians had mostly gone.  Sandwiched between two British Divisions and borrowing Australian artillery until their own gunners were properly equipped was the 4th Canadian Division; given a patch of land to defend where not quite much of anything was expected to happen.  This was a very good thing, as long as it turned out to be the case.  4th Division, the last complete unit of its size Canada would put into the field, would require time to come to terms with the practicalities of war. 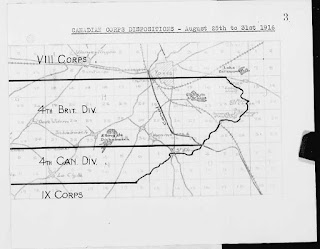 Their inexperience was something only exposure could resolve.  Within ten days of arriving in France, many battalions of 4th Division’s brigades (10, 11, and 12 Canadian Infantry Brigades) were operating on the front line, after having gone through trench rotations under supervision of more veteran outfits.

Examining official reports of this period, the shocking naivety is quite clear.  War diary entries are far more brief and appended to far less frequently than contemporary records from other divisions.  There is no disservice to the 4th Division’s administrators in this observation, as a similar brevity is found in the early entries of each preceding division.  Very noticeably, particular care was made to mention individuals, even private soldiers, by name.  It would not be long before these records, by necessity of practicality, would shed the brevity of sparse detail and the sentimentality of using proper names.  In effect, this lack of narrative detail is a bane to history and only seems to support the notion that nothing of interest occurred between the end of June to the reassignment of the Canadian Corps to the Somme in September.

A fair few daily reports and diary entries noting “situation normal” or no change”- even resorting to the shortest of shorthand “do.”- offer little to narrative history.  It should be kept in mind, however, that holding a defensive position is by no means and idle task, nor without a whispered presence of peril.

What could be said about the 4th Division’s introduction to trench warfare in the last week of August 1916, is that of all things they may learn, one of the most critical was that many events were beyond the ability of the individual to control.  Sometimes in such circumstances, there might not be opportunity to learn from error.  A fraction of a second’s inattentiveness could be one’s last.  Soon enough, it would become apparent that no amount of preparation or caution was sufficient to counter random events. 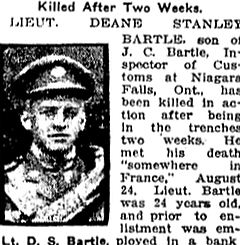 Lieutenant Dean Stanley Bartle would unwittingly prove to be an example of this harsh lesson.  A banker from Niagara Falls, Lt. Bartle came to France with the 75th Battalion, arriving on the 14th of August as part of 11th Brigade.  Ten days later, and less than a full day into his first front line rotation, he was dead.[3]  His death is noteworthy, as he was the first fatal casualty among the officers in the Brigade.[4]  Lt. Bartle’s departure- alive and in good health in his last morning; shattered out of existence that evening- would have been a rude shock to his men and his mess-mates.  In a flat-handed smack of how real this adventure had just become, Lt. Bartle could now stand as a proof of the indifference of mortality.

The 4th Division’s learning curve of front line operations could have no grace period, and the Germans were certainly not inclined to grant one.  On the morning of 26 August, a working party from ‘A’ Company, 46th Battalion was returning to billets from overnight repair work on the trenched when “the party was caught by M.G. fire in the entrance to Poppy Lane, and two men were wounded….They were in rear of party and were not missed.  When day broke they were seen from the fire trench, and four men of ‘C’ Company volunteered to bring them in from their position in the open.  This was carried out without casualties, and the four men are to be commended for their bravery.”[5]

The following day, an explosion tore through a portion of the line held by the 47th Battalion, wounding Quartermaster Sergeant McInnes and Private Legg.  No Germans were involved in this.  A court of inquiry held on the same day found the explosion to have been caused by “accidental discharge of a mills grenade due to careless handling of same by Pte. Legg.”[6] 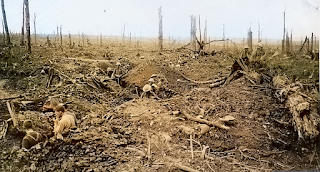 Trenches were not the only element in defensive war.  Craters left from detonated mines and heavy artillery were coveted, ready-made positions littering the lunar scape of no man’s land.  Brigadier General Odlum’s remarks on his brigade’s “keenness” in patrolling refer directly to this. Lieutenant McQuarie, Sergeant Hanly and their scouting party of 54th Battalion men discovered that the Germans had been making use of one such impression nicknamed “Crater No. 2”.  On the night of 26 August, they encountered two enemy soldiers who were quick to flee the scene.  “The crater,” it was reported, “was found to be partially fortified.”[7] German intentions were unclear.  They could have been establishing an observation post or they may have been preparing to use Crater No. 2 as a jumping-off point for a raid or local offensive.  The next night, armed with this information, Lt. McQuarie and his scouts went out again, where they “made a thorough reconnaissance of our wire and listening posts.”[8]  Nothing could be left to chance to allow the enemy to go unobserved or unobstructed.  To be doubly certain, Lt. McQuarie established four additional listening posts in the vicinity.

Vigilance was prudent.  On the 28th, close to midnight, the Germans sprung from crater No. 2 and attempted to dislodge men of the 75th Battalion holding Crater No. 1.[9]  This demonstration caused no casualties and came to nothing; being driven back the way they had come with brisk rifle fire.  A group of men from the 75th were quick to act, going against Crater No. 2 with bombs of their own, returning to friendly lines without suffering any casualties.[10]

Meanwhile, the men most responsible for the marred surface between lines were steadily at their work.  Artillery, though sporadic, was a daily occurrence, with the Germans making a hefty counterbattery attempt on the Division’s guns- 4th Australian Divisional Artillery- on the 28th.[11]  Major Davis’ 3rd Tunnelling Company, who had been on task in the area consistently, were making efforts to push their mines forward while simultaneously destroying those of the enemy; packing and firing a small countermine of 800lbs ammonal in the small hours of the 29th.[12] 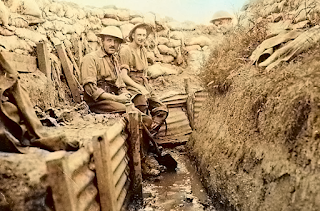 Germans, however, were not the only threat to the trench lines.  In the struggle to keep them in good condition, the climate could be equally diabolical.  A long, hot and mostly dry summer came to an end in the last days of August.  In the sodden bottom lands of Flanders, two days of “extremely wet” weather was sufficient to leave “trenches in frightful condition.”  Relieving the 54th Battalion at the firing line on 30 August, the 102nd Battalion came into “mud (liquid) knee deep-Bath mats,”-wood pallets used as footboards- “in Communication Trenches not being anchored- floating.  Wet weather breaking down trenches in many places.”[13]

These circumstances, always dangerous, often deadly, were what passed for a report of “situation normal” in the tail end of an “uneventful” summer in the Salient.[i]

My premier work of fiction, “Killing is a Sin: A Novel of the First World War” is now available for download through Kindle Direct Publishing. As an exclusive gift to my readers, I am offering free downloads of my book for Monday, 29 August 2016. Please follow the link above to get yours. 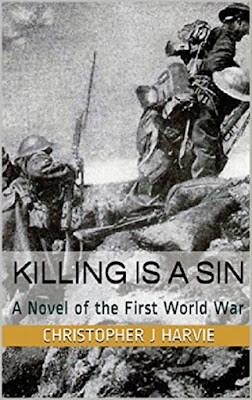 Posted by Christopher J Harvie at 05:42