Gone Forward at the Gallop

Circumstances of certain events taking place this year have had me thinking of horses lately.  the event I'm alluding to is the "Communities for Veterans" Cross Canada Ride. CfV founder, Paul Nichols (whom I've had the pleasure to speak with) has come up with the idea of riding across Canada on horseback, engaging volunteer riders from the veterans in the communities along the route.  He has told me "We will raise awareness to the changing face of Canadian Veterans by including 700 veterans on our ride. We will collect their stories and share them with the Canadian people. We believe we will hear a common story of difficulty transitioning."  I've volunteered to take part in this when the ride is scheduled to pass through Toronto in August.  As I've not had much personal experience with horses, I'm engaging with the Upper Canada Cavalry Squadron to teach me.Set up as a living history organisation, UCCS teaches riding as it would be for military riders in the early 1900's.  That these things intersect my love of history and my desire to support veterans, I hope much more will be heard of the story which will develop from this synergy.

The notion of the use of horses in the First World War is often subject to confusion.  Based upon the sheer 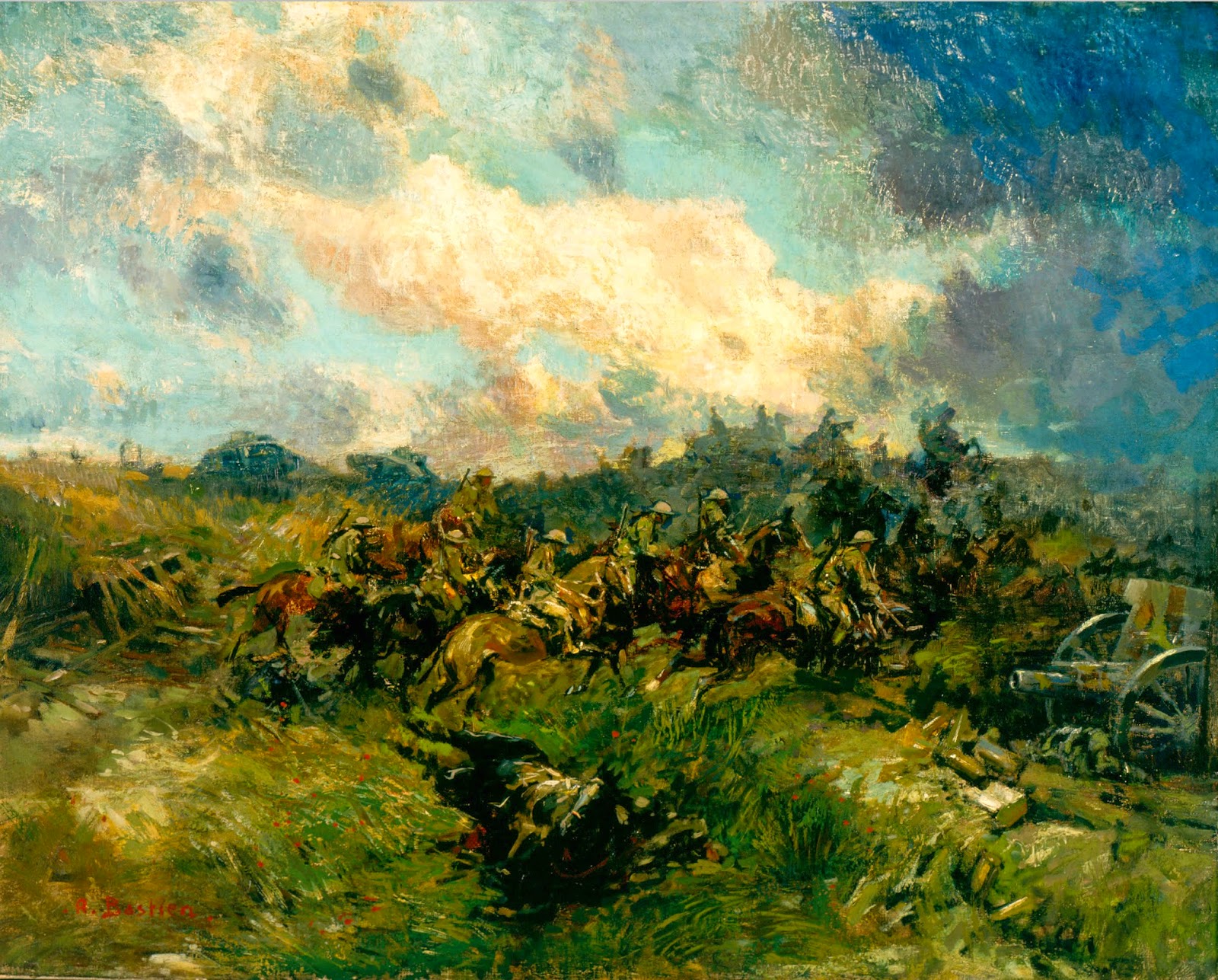 difficulty encountered by the infantry in assaulting enemy trenches, surely to continue to use cavalry- a much larger target- against such defenses would be absurd. As in fact it would be if cavalry functioned in such a role, which practically, it does not.   Mounted troops provide reconnaissance, deliver communications and secure the flanks of an advance.  When employed in their fighting role, the cavalry's purpose was to use its advantages of speed and endurance to hit the enemy on his flanks and rear to disrupt fighting cohesion and either set or keep the enemy on the run.  The war would change that, as Gordon Corrigan explains: “the British recognised that the roles of cavalry no longer included shock action against formed bodies of troops.”[1] If there is a disadvantage to cavalry it is this:  Strongly defended static positions that can keep horsemen at a distance.  The standard defence against cavalry in the pre-industrial age had been the "formed square"; infantry organised in four sided groups using either pikes or bayonets to provide an obstacle against close approach and volley-fire to reduce the threat at a distance.

In the early stages of the war, those first six weeks of grand armies on the move, the cavalry provided advanced reconnaissance and were used as a screen to obscure and protect infantry movements.  As the war developed into its static phase, cavalry could no longer act in such a capacity.  In the event, many units were sent into the trenches in the role of ordinary infantry.  Ideally, mounted units would be ready to exploit a break in the deadlock, however, “the cavalry’s great moment, when 12,000 horsemen would erupt through the German defence lines and sweep out into open country and beyond, never came.”[2] Which isn’t to say that at any point during the war was such an action discounted altogether.  Corrigan notes “by 1917 the number of equines in all theatres had peaked at 591,324 horses and 231,149 mules, of which 368,149 and 81,731 respectively were on the Western Front.[3] Notably, only a minority of these animals were used for the cavalry, and it is to be kept to mind that the prime means of transport and transportation in all aspects was by horse.

A main reason why mounted troops were generally ineffective is because the situation on the Western Front dictated against their use.  When the opportunity existed to bring mounted troops forward, which were few and far between, they usually acquitted themselves well.  One example- a microcosm perhaps in perspective- of how effective cavalry could be occurred on the 20th of November, 1917, the opening day of the Battle of Cambrai.

Of a long and storied history, Cambrai was an ideal target for a limited offensive.  “Cambrai was the location where the Duke of Wellington had his headquarters from 1815 to 1818 during the British occupation in France. Some 100 years later, during the occupation of the town by the Imperial German Army, it was a headquarters for the German Supreme Command, also in occupation in parts of France. Strategically Cambrai occupied an important position as a railhead and junction for supplying the German Armies on the Western Front.”[4] General Sir Julian Byng, the commander of the British 3rd Army had set his objectives to punch through the German defensive line, on a narrow front in between the Canal de L’Escout and Canal du Nord, enabling his forces to capture Cambrai, fortified positions within Bourlon Wood and a vital crossing over the River Sensée.  This move would cut off German units in the area and it was hoped would allow a follow up assault to move towards Valanciennes.[5] 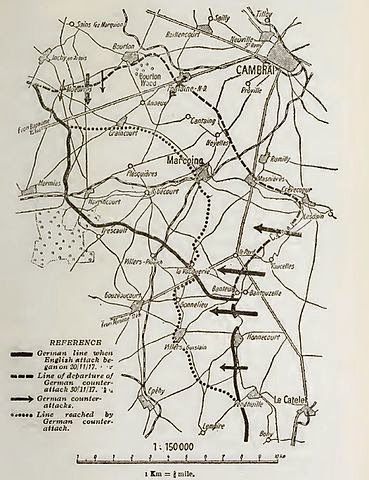 The battle of Cambrai was the first time that tanks were available in sufficient numbers; and where armour, infantry and air units were used in a coordinated and cooperative fashion.  Byng’s ideas behind his plan of attack were new and bold, attempting to capitalise on speed and manoeuvrability of armour and its companioned shock and surprise.  Without a preparatory bombardment, leading tank units broke the German front line, with infantry following up to hold the taken ground with astounding gains.   A lack of available reserves; insufficient levels of coordination and a breakdown in communication created a failure to follow up on what had been an initial success.  The loss of forward momentum and the time taken to remedy the deficiencies meant that by the time the British were prepared to advance again, what had been a “wide gap…between Masnèires and Crèvacoer”[6] was plugged by German reserves having lately arrived from Russia.  From the promise of its first day, Cambrai would wear down into the style of back and forth attritional fighting that the war had made a reputation for.

On that first day, Byng’s cavalry, including the Canadian Cavalry Brigade, had been in position to exploit a breakthrough and push into Cambrai itself.  “Opposite Masnèires the British advance, without tanks, had however, been halted in front of strong German positions, but the Canadian cavalrymen were not aware of that development.”[7] Shortly after noon, the Fort Garry Horse, the advanced guard of the Brigade moved forward into preparatory positions at Masnèires.  There were delays getting into position as Lt Col RW Paterson noted in his after action report “At 2:10 pm…I advanced into Masnèires.  On reaching the bridge in the Main Street I had found that it had either been blown or broken in by the weight of a tank.”[8] At 3pm a substitute crossing had been completed, and Col Paterson advised the Brigade commander by message that he was moving forward.  He assigned Captain Campbell’s B Squadron to lead the way across, intending to “follow with the balance of the Regiment as soon as he had gotten over.”[9]

When B Squadron was across, Paterson followed and sent instructions for C Squadron to follow up; but before this he was given countermanding orders.  Brigadier General Seely had initiated the cavalry attack believing that the infantry attack had been more successful than indeed it was.  Only after B Squadron had crossed the canal did Seely get orders to “call off the cavalry advance.”[10] These were passed on to Paterson, who tried to get word to recall B Squadron, but they’ve already gone forward “at the gallop” passing through the infantry in front and out of sight over a ridge forward of friendly positions.

Advancing quickly, but ultimately alone and unaware that no-one would be following them, B Squadron, as Lieutenant Harcus Strachan reported, “entered the enemy’s line through a gap cut in the wire by our own troops.”[11] The Squadron leader, Captain Campbell, is hit, requiring Lt Strachan to take command.  Pressing forward, using a sunken track and under machine gun fire the whole way, the squadron charged a German battery of four guns, killing or capturing the crews.  Riding beyond the guns, “the Squadron then took on the enemy’s Infantry, who were retreating and disorganised.  These either took refuge in shell holes or surrendered or were killed.”[12]

On nearing Rumilly, Strachan’s squadron had about forty casualties, and only five horses that remained unwounded.  Taking position in another sunken road, isolated and still under fire, Lt Strachan decided to fight back to friendly lines dismounted.  Distracting the enemy machine guns by stampeding the horses and using the cover of darkness the men moved back the way they had come.  There were several contacts with enemy working parties and more men became casualties.  “Lt Cowen, who had been previously hit, reached home with 19 Other Ranks and 9 prisoners.  The rest of the Squadron, 2 Officers and 11 Other Ranks entered Masnèires at the Eastern entrance….I would give as a conservative estimate (of casualties) at 40 going out and 60 on the return trip.”[13]

Strachan’s report in the war diary is frank, but reserved.  A citation in the London Gazette in December 1917 reads:

“For most conspicuous bravery and leadership during operations.
He took command of the squadron of his regiment when the squadron leader, approaching the enemy front line at a gallop, was killed. Lt. Strachan led the squadron through the enemy line of machine-gun posts, and then, with the surviving men, led the charge on the enemy battery, killing seven of the gunners with his sword. All the gunners having been killed and the battery silenced, he rallied his men and fought his way back at night through the enemy’s line, bringing all unwounded men safely in, together with 15 prisoners.
The operation – which resulted in the silencing of an enemy battery, the killing of the whole battery personnel and many infantry, and the cutting of three main lines of telephone communication two miles in rear of the enemy’s front line – was only rendered possible by the outstanding gallantry and fearless leading of this officer.” [14]  The citation being for Lt Strachan’s receipt of the Victoria Cross, the British Empire’s highest award for valour in the face of the enemy.
It could only be imagined what may have occurred if the whole regiment of Fort Garry Horse had gone 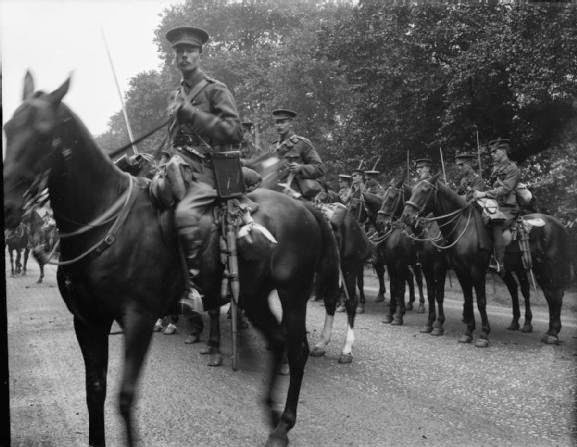 forward.  Perhaps it’s best not to speculate- but despite heavy casualties, B Squadron was able to engage and reduce a strong enemy position- at sword point.

Overall, Cambrai would be more noted for its failures than successes, but the saving grace of this battle is, as Liddell Hart puts it “If November 20th 1917, is in itself a tragedy of errors, its eventual effect on the fortunes of the Allies was beneficent-pointing and paving the way to the victorious methods of 1918…the dawn of a new epoch.”[15]