Scarce Heard Amid the Guns Below

With 2015 now begun, looking ahead gives both casual and professional history enthusiasts a great many centennial anniversaries to be observed and studied in the next twelve months.  1915 was a year in which so many aspects of the Great War were defined.  The futility of the deadlock on the Western Front in collaboration with the failure to open a decisive campaign elsewhere would inspire a deeper coordination and cooperation between allies; resolving to defeat the main enemy in the main theatre.  Germany’s program of unrestricted submarine warfare, a like wise attempt to produce a strategic rather than tactical victory similarly would fail.  It was suspended to ease diplomatic strain with the erstwhile neutral industrial powerhouse of the United States.  Russia’s poor performance in battle and increased grievance among its public began the simmering of an explosive and world changing revolution to take place within the next two years.  On one afternoon in late April of 1915, with winds in the right direction, German engineers opened valves on cylinders of chlorine and brought the war into a new age of terror.

Within the unfolding battle- known to history as the 2nd Battle of Ypres- a Canadian surgeon would quickly put down fifteen lines of verse which have since become the most well known poem to come from the events of the war.  Considering the reputation WWI has for evocative poetry, it is saying a lot about the message of this particular piece that it stands alone in a fertile body of works from some of the highest regarded names in Twentieth Century English literature.

Assigned to 1st Brigade, Canadian Field Artillery, John McCrae, a Major and Brigade Surgeon was present for the 17 days of 2nd Ypres, during which half of his brigade died.[1] His experience is described in a letter 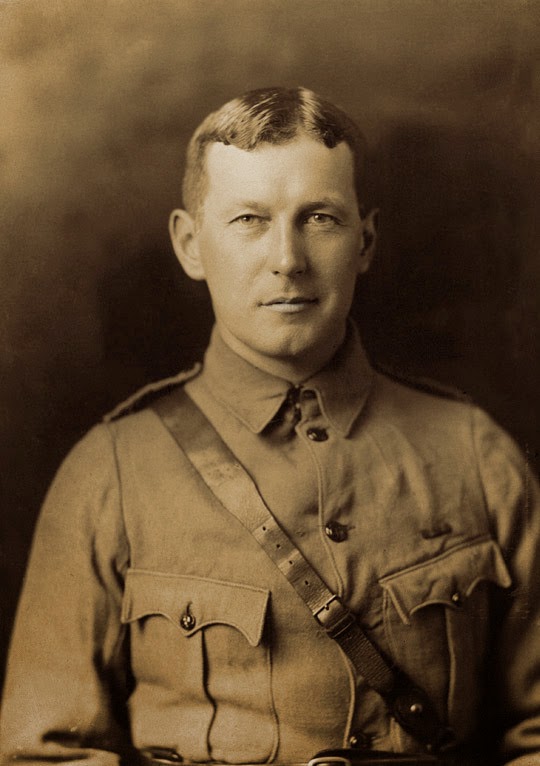 he sent to his mother “The general impression in my mind is of a nightmare. We have been in the most bitter of fights. For seventeen days and seventeen nights none of us have had our clothes off, nor our boots even, except occasionally. In all that time while I was awake, gunfire and rifle fire never ceased for sixty seconds ..... And behind it all was the constant background of the sights of the dead, the wounded, the maimed, and a terrible anxiety lest the line should give way.” [2] McCrae was inspired to write “In Flanders Fields” on the 2nd of May while waiting to attend the wounded still coming to his post after having buried his friend, Alexis Helmer the day before.  The poem itself tried to capture his ideas of sense of duty, and having a central theme of death was in keeping with many of his previous works of which thirty had been published before the war and his medical specialty of pathology.  Both themes, intertwined, would prove to have wide appeal among a war known for poetic expression.

“More than any other conflict,” writes Michael Duffy in an article at firstworldwar.com, “the Great War inspired writers of all generations and classes, most notably among combatants.”[3]  The link between verse and the war is so ingrained that the proliferation of poetry can even be satirised as in the BBC Television series “Blackadder Goes Forth” by Ben Elton.
It is reasonable to ask why this may be so.  A short study conducted in 2013 by University of Exeter Professor Adam Zeman, a cognitive neurologist found “more emotionally charged writing aroused several of the regions in the brain which respond to music.”[4]  Previous work indicated that these areas, in the right hemisphere of the brain were responsible for the physical responses that music can invoke. It might not be too far to assume that the writing of poetry can become as much of a therapeutic release as the University of Exeter has shown the reading of it can be.   Jon Stallworthy, author of “The Oxford Book of War Poetry” begins the book by evoking the emotive force inherit to: "'POETRY', Wordsworth reminds us, 'is the spontaneous overflow of powerful feelings', and there can be no area of human experience that has generated a wider range of powerful feelings than war: hope and fear; exhilaration and humiliation; hatred - not only for the enemy, but also for generals, politicians, and war-profiteers; love - for fellow soldiers, for women and children left behind, for country (often) and cause (occasionally)."[5]
Perhaps it is very telling that two poets whose work would largely invoke the sense of futility of war in the post-war years, Siegfried Sassoon and Wilfred Owen, had both been hospitalized for nervous disorders we might see as PTSD in contemporary medicine.  In fact, it was during this period that the two men collaborated on poetic works.(fww.com)  Sassoon would survive the war, publishing “anti-war rhetoric” in poetry and prose.[6] Owen was killed in action on 4 November 1918.  Stephen Cloutier, writing on early editions of Owens’s work makes arguments that the message of poetry can be carefully determined through how editions are presented.  Cloutier cites that a post-war volume is decidedly more anti-war and anti-establishment (Sassoon being the editor in question), while a newer edition published in the 1960’s seems to lean towards the notion of there being a certain necessity to war, despite its terribleness.[7] McCrae’s work, first published in “Punch” Magazine, December 1915 captured immediately a sentiment which could not only be understood by the public, but the appeal from the dead to the living to “Take up our quarrel with the foe” carried such a broad plea that “(t)he poem made McCrae’s name, usually misspelled, known throughout the British empire and later in the United States. The ferocious third verse of the poem was used extensively to further the war effort, including the campaign to bring the United States into the war, as well as in recruiting, raising money, comforting widows, and attacking both pacifists and profiteers.”[8]
Within those lines is where this project takes its name.  It states the belief that perpetuating history- the lessons and growth which have come as a result of the war- is a way in which the present can continue to show gratitude to those who sacrificed their lives.
A bitter irony is that McCrae would be one of the “failing hands” he wrote about.  An index card tucked into his service records reports “died on 28th (January 1918), suppurative meningitis secondary to acute lobar pneumonia.”[9] He is buried at Wimereux Communal Cemetery, not far from the hospital he served at.[10]
Since the war, his poem has become so identified with, and the deaths caused by it, that it is now a traditional part of remembrance ceremonies throughout the world.  McCrae’s message that we not forget is now part of the reason why we do not forget.
To the memory of McCrae and his literary contribution a campaign is underway to raise a statue to his memory.  Lt General, the Honourable Roméo Dallaire says of this notion: “I would like to publicly support the John McCrae Statue Campaign.  Lieutenant-Colonel John McCrae was a gunner, a doctor and a poet.  His poem “In Flanders Fields” is perhaps the best known poem in the world.  The Royal Regiment of Canadian Artillery, supported by the Royal Canadian Medical Service, is honouring a great Canadian with this project to raise a statue in his honour.  The graphic clarity of his images still captures our imagination – and we Remember.  It is long overdue and this project has my support.”[11] The campaign organisers state “To date, we have raised $252,000 in total for the McCrae Statue, online through Indiegogo, through our website and all other donations. We are over 70% of the way to our overall target of $350,000.  Recently, we have received a number of generous gifts off-line outside of our crowdfunding campaign. These include: The Canadian Medical Association $10,000; The Royal College of Physicians and Surgeons $10,000; Dominion Command, Royal Canadian Legion $5,000, in addition to the numerous donations we are receiving from individual Branches across Canada; 7 Toronto Regiment, Royal Canadian Artillery $5,000.”[12]
For further information, please visit the project’s website at http://www.lcolmccraestatue.ca/                          My thanks to all who have made this last year the most successful one yet for my writing.  Having enjoyed my holidays at the end of December, I now return to posting to this space regularly.  I appreciate your patience in between my last update and now.  As always, this project can be followed via Facebook and Twitter. Comments, questions and suggestions are always welcome,
[1] Prescott, John F., “John McCrea” http://www.biographi.ca/
[2] Prescott, John F., “In Flanders Fields: The Story of John McCrae” Boston Mills Press 1985 pg 98
[3] http://www.firstworldwar.com/poetsandprose/
[4] http://psychology.exeter.ac.uk/latestnews/researchnews/title_324631_en.html
[5] Stallworthy, John “The Oxford Book of War Poetry” Oxford University Press, 1984 pg xix
[6] Duffy, Michael within http://www.firstworldwar.com/poetsandprose/
[7] Cloutier, Stephen “Wilfred Owen and his Early Editors” article via firstworldwar.com
[8] Prescott, John F., “John McCrea” http://www.biographi.ca/
[9] McCrae, John: Service Records obtained through Library and Archives Canada
[10] cwgc.org
[11] http://www.lcolmccraestatue.ca/
[12] http://www.lcolmccraestatue.ca/
Posted by Christopher J Harvie at 00:00