Leading From The Front

Things here are moving ahead, but it is, as is often the case of having to be patient with regards to returns on submissions; while at the same time put into action what I can and develop new ideas.  Just as last week, I feel very close to the point where "If Ye Break Faith" is really gong to pick up steam and use this potential to make the project's goals possible.  Once again, it is to all of you who've taken the time to read this column I  owe the thanks of getting this far, so I hope you all stay with me and see the rewards of your support as they occur.  Se, the one little pet goal I've set for myself is to in short order receive something in return for being published.  I've never been published before, so it is quite a big thing for me.  At least I'd feel a bit of credibility when I tell people I'm a writer.  Since "If Ye Break Faith's" direction has grown to be so much more than the memorial project it is built upon, I have some up with a brief by-line to state the aims of this work:
"Making military history accessible and engaging in order to forever preserve the memory of sacrifice."
What do you think?  Send thoughts, comments and questions here.  To keep up with the latest news and developments, follow "If Ye Break Faith" on Twitter and Facebook. 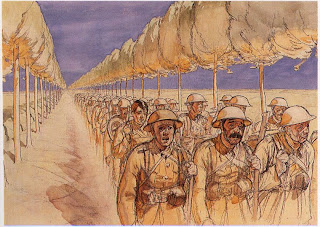 There are two very basic things an army needs.  First, it requires men, and then it requires leaders.  Without appropriate leadership and discipline, an army is nothing more than an armed mob.  The difficulty with this is that while there are inherent personality traits that may give one aptitude towards leadership, the concept is as much skill to be taught as talent to be born to.  With peace time armies it is simple enough to run adequate courses for NCO's and have the appropriate number of candidates in officer academies to ensure that billets are kept full.  In the event of war, particularly one on the scale of the First World War, as armies expand, vacancies multiply and must be filled.  France and Germany has a relatively easier time at this. With both of their policies of long term and universal military service there was always a large cadre of officers and NCO's from both regular and reserve forces to pull from.  Britain in contrast had preferred to keep a small professional army whose ranks were filled by volunteers as opposed to conscripts, with limited reserves in the nature of the Territorial Army and the Yeomanry (volunteer cavalry).  Canada had much the same system in effect on the outbreak of war, except on a much smaller scale with both the regular force and its reserves, known as the Militia.

When calls came for men in the tens and hundreds of thousands went out, there was no shortage of volunteers, but there was a dearth of those able to lead them.  Retired officers and NCO's were brought back into uniform, if only to get training underway.  In the UK, with the so called "Pal's Battalions" of the New Armies selecting leaders could be easy.  Often these "Pals" units were made up of volunteers from the same employer, sport of social club and developed their military hierarchy based on the structure of the civil body they came from.

Failing any ready made structures, both newly raised and expanded to full strength reserve battalions were required to take men directly from their previous livelyhood to one of higher duty and responsibility.  Prerequisites with regards to education and experience determined standards for commissioned officers, and schedules to rapidly train newly made officers went in to effect quickly.

Armies typically have a two-tier organisation of leadership.  The first group, the officers, are purposed to carrying out the military will of their government.  Such is their tie to the state that the derive their authority to lead from their commission; a warrant that grants the ability to the officer to command in the absence of the Sovereign.  Traditionally it was from the aristocracy that officers were selected, often able to purchase a commission without any military training.  These practices had not been long out of date in Britain by the turn of the century, and specialised schools to educate officers did so reflective to the size and nature of the army at the time, one set for colonial garrison.

The second group, non-commissioned officers gain their rank through experience and length of service.  Promoted on merit and ability, the NCO is tasked with ensuring that the officer's orders are carried out.  In a Pal's Battalion, a lead hand or factory floor supervisor could be given a couple of chevrons and set to lead in a pinch.  In other regiments, established junior NCO's could find themselves jumped through the ranks and a new arrival who was a little more switched on than the rest could find himself a stripe quickly. 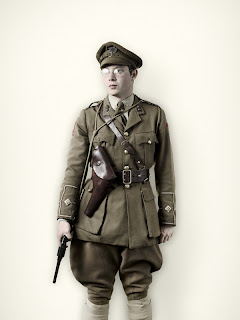 Of course, the expanding of the army had a huge effect on leadership at the top end.  Not used to units the size of Corps and Armies (for a primer on unit organisation see Order of Battle) the British had to groom senior officers, some of them also recalled retirees to the notion of being charge of numbers never before directed at one time.  These larger formations also called for particularly specialised leadership- the positions known as "Staff."  These officers aid the general by taking charge of elements involving Intelligence, Supply and Operations so that the senior officer can better direct the battle.  The difficulty again was that there were just not enough officers with the level of knowledge and experienced these higher organisations demanded.

The underlying problem with all this is that hardly anybody was in a position in which they really knew what they were doing.  Something has to be said about the determination and doggedness these newly made leaders exhibited in the task set before them.  Later in the war "battle schools" to train NCOs and officers behind the lines were established, even including a quick learning version of the Staff College.  At the onset, officers and men had to rely more on the second part of the nature of leadership: talent.
Posted by Christopher J Harvie at 05:00