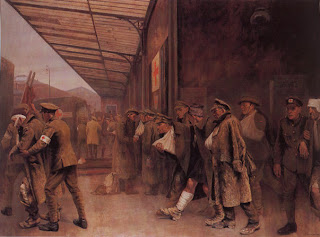 "The thing is," Dundas said, in between sips from his battered tin cup, "I don't mind tea, like.  But what I'd give for a cup of coffee."  The others in the bay agreed.  The Brits were mad for tea, but a good coffee was hard to come by.  Dundas' simple observation was the last thing he did as the world turned inside out.  Earth, steel, heat and bodies flung together, the small traverse in the trench collapsing under a shell from a minenwerfer.  Shrapnel from the shell flung upward and out, chewing into the wire in front and the high ground between bays.  Then silence.  The dirt shifted, dust and smoke settling.  Men from the next sections frantically move towards the scene. The Sergeant, Elm, posts riflemen to observe for enemy movement while the rest claw at the loose soil, spilled sandbags and split timber with hands, helmets, shovels, anything close to hand.  The call for stretcher bearers is shouted back down the line.  Dundas is the first to be pulled free, but there's nothing to be done for him.  Kennedy is a fortunate one, he's brushed off with little more than a few scratches.  Woodbine has an iron splinter right the way through him.  He's breathing in a raspy, bubbling way but seems to be out and senseless.  Sgt. Elm knows all too well the poor fellow won't last long and tells the stretcher bearers to take Strachan first.  The shell has torn into his right leg, shredding his puttees and peppering his calf with dirt and debris.

"You're a lucky one, mate" one of the bearers tells him as they lift him onto the canvas to carry him back.  "Seems you've got the perfect blighty."

Short of the war ending, the best possible circumstance to be shut of the war otherwise was for a soldier at the front to receive a "blighty."  The word indicates the favourable type of wound that would excuse one from service but not be permanently disabling.  The French called such a thing "Un Petite Blesse" literally "a little wound" but co-opted in English as "A little blessing."

Strachan is also lucky in that he was hit in the trenches and was immediately attended to.  As battles progressed, those wounded in no-man's land or among enemy lines could only do their best to make their own way back or wait for stretcher parties to fetch them in.  When there were heavy casualties, this sometimes could take days.

The wounded's first port of call was the Battalion Aid Station, a post set up in the trenches itself or as close to the advance as possible, staffed by the Regimental Medical Officer with his orderlies and stretcher bearers.  Light wounds could be treated quickly, more severe cases made stable for further attention down the line, and those too bad to move comforted.  Strachan's leg requires surgery so he is bandaged up and carried back to the Advance Dressing Station.  Here his dressing is checked, treatment logged on a card affixed to his uniform and preparations are made to move him further out of the line to the Casualty Clearing Station and thence to a Field Hospital; where despite the care he's been given he may very well loose the leg below the knee.

The volume of casualties caused by this new type of industrial warfare were unexpected, but an efficient system for allowing treatment at different levels moving from front to rear ensured that the best care per case could be given.  This meant that the wounded would receive quick and appropriate treatment and this approach, once perfected and working well saved lives.  Modern battlefield medicine is based on this system.  Practice and technological advances mean that the soldier who finds themselves in a similar situation today has a very high survival rate indeed. 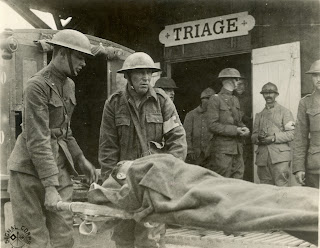 Medical personnel didn't just make extreme efforts in the face of battlefield wounds.  The responsibility of the Regimental Medical Officer was the health and well-being of the officers and men of his battalion.  He would do what he could to prevent disease and treat sickness, as each soldier who is unwell is a detriment to the effort of the whole.  Preventing illness, particularly in less than ideal trench conditions had a high priority.  This effort is often overlooked by the dedication shown by putting themselves at great risk to get wounded men out of the line of fire, perhaps less glamorous but equally important.  The First World War shocked all by the sheer numbers of those who died during the conflict, but it was certain that number would have been more inflated if not for the work of those committed to the medical care of their comrades.
Posted by Christopher J Harvie at 01:02