I have had that anticipatory feeling that the efforts I've been putting forward in both this column and the network I've been establishing are about to give back.  I was hoping to be able to give news on some submissions and proposals I've made, but I think the lesson here is to not submit a five-thousand word article on somebody's late Friday afternoon and expect a quick reply.  Every once in a while I might let it show that I'm really quite entres nous to the whole publication business.  Main thing is that I've made incredible headway and feel on the cusp of being able to have my efforts begin to be self-supporting.  What this becomes at a certain point is bearing witness to a man who has taken a chance to live his dream and it's never seen him happier than to apply his passions to a lively-hood.  Once again, I have all of you to thank for that.  For watching this column and encouraging me to continue you have all contributed in immeasurable ways to what I've set myself forward on.  While doling out specific thanks in my last post, I realise that I overlooked Curtis, who not only sent me a complimentary note, but pointed out a typographical error for my correction.  Yours is the right kind of help I need, thank you.  I'll also mention Ken Reynolds (Milhistorian) once again for dutifully retweeting my updates to his followers.  You can also follow "If Ye Break Faith" on Twitter and Facebook to keep current on the project and its development, and get the newest updates once they go to press. 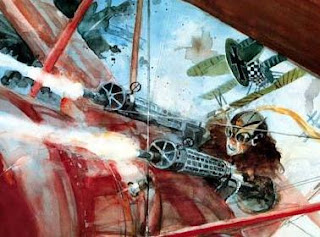 A few weeks ago I called out for topic suggestions.  I'm still open to that, by the way, so if you have any comments, questions or topic ideas, please post them here.  As it turns out, I was generating some notes over the weekend for Monday's post when a friend made mention on an aspect of the war I had only vaguely touched upon last month in Necessity and Invention.  It's here that my bias lies wide open.  I was in the infantry and so have a deep and passionate lean towards that branch of service.  Never mind (ahem) it is the most important arm and all other trades in the military are for the express purpose of supporting the infantry, I should try perhaps to be more balanced in my approach.  If there is anything in the perception of the First World War that lay in more opposite spectrum of popular thought is that of the mud and struggle of the Poor Bloody Infantry held against the dash and daring of the Knights of the Air.

To say that airpower was discounted, misunderstood or misused at the onset of war is a fair statement.  Powered flight was little over a decade old when war broke out in Europe.  Early planes being simple underpowered machines it is easy to see how moving war into the third dimension could be dismissed if the nature of flight was not seen as much more than a novelty.  There were those among the belligerent forces who were innovative and progressive, and each nation did have some limited air assets even if their potential was certainly not entirely fathomed.

When the war ground down into entrenched stalemate, the need to spot and observe the enemy didn't diminish, but the best ways of doing so were impeded by the nature of how the ground was being defended.  Cavalry sorties to find and report enemy movement lost their effectiveness and infantry patrols could only give information particular to the area they were directly responsible for.  To get a better picture on the entire situation, the commanders needed to "zoom out" as it were.  Observation balloons allowed a wider panorama of the battlefield, but the mobility of aircraft in a similar role was far more advantageous.  Troop movement, defensive preparedness and artillery positions could be reported and be prepared for in a more timely fashion than ever before.  Then, there is a desire not to be seen and have your disposition given to the enemy.  From this instinct of preservation came the idea to arm pilots and then the aircraft themselves.  At first, it was a desire for the observation planes to be able to provide some form of defence, the idea took hold to have machines with the express purpose of interdicting the enemy's reconnaissance.  In short order, the notion of air superiority as a crucial component to successful land operations came to be as it remains today.  When that point was reached, the race to outdo one another was joined.

The men on the ground developed rudimentary anti-aircraft weapons by remounting artillery and machine guns to fire in a more vertical arc.  Soon though, planes attacking other planes became a common feature of the front line.  Fighters would attempt to bring down spotter planes, while escorts in turn protected their observers by engaging the fighters.  The need to have the better machine than the enemy, to keep ahead on the technology curve enabled the development and potential of larger and more powerful planes to take the air.  Some of these were now able to deliver offensively to targets on the ground, giving birth to tactical bombing; that is engaging the enemy's ability to make war in the field and this in turn gave way to strategic bombing-destroying the means and morale to continue war beyond the front line.  These operations further pushed developments as now better faster and more heavily armed fighters were required to both escort and destroy bombers and airships determined to bring war to the homefront.

Their work was dangerous and daring, many pilots and aircrew were killed in accidents, collisions and mechanical failures as with enemy action.  It was the modern notion of technology, of mobility and of separation from the grinding war at ground level which spawned a following and fame for the most successful pilots.  Each country had their best ace, men with high scores of aircraft downed, and names such as Richtofen, Bishop, R A Little, Mannock, Fonck and Rickenbacker became celebrity not only to their own countries, but across the lines as well. 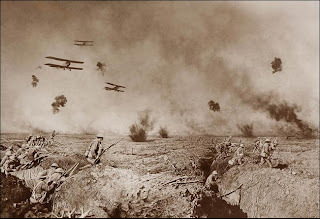 These pioneering men and machines changed the face of war forever.  Nowadays, the presence or lack of air power can define the feasibility of an operation.  Once the technology arc swung as far to produce the ability for better coordination between land and air assets, along with vehicles capable of travelling overland with speed, range and adequate firepower, the complete notion of AirLand War could be realised.  In a future war, the side that first invested in combined arms operations would have a distinct advantage and hold the world in awe of "Lightning War."  This would have to wait a further twenty-five years, but those of the First World War who took to the air set in motion events and ideas that would help to wrench the world away from the Nineteenth Century and into the modern era.
Posted by Christopher J Harvie at 05:00