When I had begun this project a little over three months ago, I had a general idea of what I was setting out to accomplish.  There was no way for me to determine how this work would grow and which avenues would open for me to promote and support my goals.  The one thing that thrills me most is the development of an emerging international audience.  Most of the thanks for this expansion is due both to Warfare Magazine in the UK and Regimental Books in Australia.  Their support of my work has so far resulted in "If Ye Break Faith" gaining much wider recognition than I could have managed in such a short time on my own.  Along with the two I mentioned, there are so many more followers and supporters on both Twitter and Facebook who honour me by taking the time to read and discus my work.  In the last seven days I've been fortified by such positive feedback from friends in person and online it inspires me to continue to try to outdo my previous efforts and make every successive post the best one yet.

To my new neighbours, who not only enjoy my writing but graciously feed me when I've worked too long in the day to put a meal together, I owe a debt of gratitude.  My mentor Robert helped to supply me with the hardware I need to do this work and the encouragement to continue.  Not to forget Laura, whose compliments last week recharged my mental batteries.  Perhaps I could buy her a coffee sometime.  The upshot of all this is that I will no longer be posting blog updates on Reddit.  While that site serves to drive my traffic, there is no real quantifiable numbers.  I'd much rather have less visits to this space if only it means that those visitors I do have are taking my writing on board.  Watch this space as there is movement afoot, I'm shopping a few articles and hoping to gain a handling publisher for "Iron Spirits."  All of this work will of course be reflective of the aims of "If Ye Break Faith" and will help support the cost involved of completing the memorial work.  Interesting times are ahead, so if you're just joining us now, welcome.  You couldn't have come at a better time. 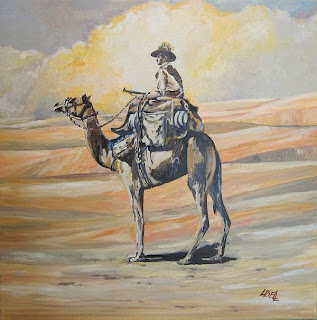 Thinking on the emergent international audience I'm growing couldn't help but lead me towards thinking about the use of the term "world" in describing the war.  The main concentration of the war's effort and study, particularly from a Britannic point of view is of the Western Front, the line of conflict that scythed through Belgium and France from North Sea to Swiss Border.  Often, even the Eastern Front is discounted but due to its nature and resolution can not be as Germany's war against Russia was so fundamentally linked politically and materially to the west.  What occurred on one front would dictate the situation on the other.  No more was this evident than after the Russian revolution and separate peace with Germany which allowed the latter to move huge amounts of men to the west in a gamble to force a conclusion before the United States could take the field in force.  The balance of obligations between France Britain and Russia to support one another would rise to create some of the bloodiest contests of the war.

Other parts of Europe were similarly contested.  The Balkans (collectively), Greece and Italy were all countries incorporating a new centralisation of government but containing peoples of diverse national backgrounds.  These countries fell into conflicts intended to either support or divide these emergent states.  What came to be in each of those cases was a necessity of committing allied support to these areas, from both power blocs which in turn had an effect on the other theatres.

Beyond Europe, the objective was to ensure the safety of colonial possessions.  In the last decades of the Nineteenth Century, the building of a German High Seas Fleet had been a serious threat to Britain's supremacy abroad.  Entering the war in defence of Belgian neutrality enabled the Royal Navy to attempt control of the sea lanes and thereby keep the Imperial possessions secure.  There was fighting throughout Africa, although in a more limited fashion than in Europe to keep sovereignty over these areas of distant British, French, Belgian and German control.

The Ottoman Empire declaring for Germany and Austro-Hungary threatened interests in the Middle East.  Despite efforts against the Turks being described as "sideshows" the question of power balance in the area and beyond it necessitated a response.  The actions in the Dardanelles was an attempt to alleviate Turkish pressure on Russia and secure shipping lanes between the UK and its ally.  At the same time, Britain had opportunity in the Middle East to push Ottoman interests out and increase their influence there.  The error is in thinking that diverting forces from the main theatre to challenge subordinate partners in Germany's alliance would weaken the principle belligerent, and thus force a conclusion without a direct confrontation of the Kaiser's armies.  It was a duality where hard choices had to be made.  The only way to defeat Germany would be through destruction of her forces in Europe to bring a military solution there, but the only way to prosecute all war aims was to meet Germany's allies and colonial forces where they threatened.  No doubt this division of resources led to the European theatre developing as it did, as much as the efforts in particular to Africa, the Middle East and the Balkans would set a chain of events to work that would have repercussions on the rest of the century and beyond.

All in all some one hundred thirty countries were involved in the First World War.  It's true that many of these nations declared war late in the conflict and didn't participate in the actual prosecution, but the Great War held influence and sway in daily events across the globe for over four years.  That we today can see political and geographic events linked to such a large conflict is really no surprise.

AS A LATE ADDITION:  Someone came to my site via a web search for a particular name of a CEF member who had died during the war.  I hope they come back to read this.  I attempted to find a photograph of Pte Percival Beake, but only came up with his grave marker in the Veteran's Affairs Virtual War Memorial.  It may stand that no such photograph exists, perhaps in a digital record at least.  Following your family's lineage is a great pursuit.  With his records, and the diaries of the 42nd Battalion we could gain some inference to what his life was like.  In recompense, while searching for your name, a record came up for one of the initial sixty-two from Oakville, Ontario.  I give you my word that Pte Beake's story is there to be told as well.
Posted by Christopher J Harvie at 05:00