The end of the month has arrived, and I find myself having maintained my status quo, but I am still very church mouse-like in the liquidity department.  So, all is not lost, and I can focus on the things that will go towards bettering myself.  Over the past week, two things have happened.  First, the solid support I received from my readers concerned about my work and urging me to come back to it as soon as I could.  The other thing was that despite not writing or promoting this page over the course of the last week, I've still managed to gain new followers on Twitter, always a pleasant feeling, made somewhat lacking by my not being able to offer any new content to them. 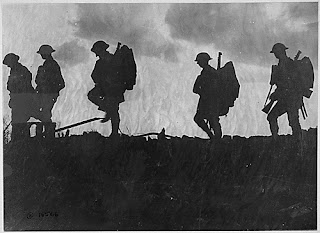 We then are getting back on track.  In all honesty I was frustrated with a string of missed opportunities as well as having to deal with a narrow bottom line.  Giving myself time to think I realised how my reaction was not in accordance with the values I admire in the people to whom this site is dedicated.  They too had their share of frustrations and reversals, especially in the early years of the war.  The problem was that so much was new in the technical sense that the lapse of tactical innovation helped to develop and maintain the spirit of stalemate along the Western Front.  Differing expedients were tried to make possible the mutually sought after "breakthrough", to redevelop the conflict in open country and thus return to familiar elements.  The irony is, of course having to think in terms of a new solution in order to be able to return to doing things as they've been done before.

Larger concentrations of artillery, both in number of guns on the line and length of bombardment in order to root out the defenders and destroy his works; poison gas to set the enemy on the run; digging under the trenches to explode mines beneath the enemy; taking the war to entirely different theatres were all things that both sides worked with some degree of success and failure.  There was nothing, though, to replace the necessity of sending infantry in to claim sought after ground, and at the same time no way of preventing the method of that deployment having to rely on simple tactics and broad planning.

The difficulty was on two fronts.  The men coming into the war after it had been brought to a standstill of trenches were not the professionals their predecessors of 1914 had been, and had everything to learn, notwithstanding emerging new aspects of warfare.  By the time they were deemed fit to take the field, the pressure of time meant that their tactical ability was so much less than was demonstrated by the destroyed regulars on both sides, so could only be relied upon to operate with tactical simplicity.  On the other end, the Generals were coping with hosts unimagined a generation before, and thus had a similar time of adjustment to circumstance.  During the course of this phase of the war, many errors and losses occurred in result of failure to adapt.

These lessons were absorbed, and from them, solutions were enacted.  For the Germans, this meant both strengthening their defences as they did with the Hindenburg Line, a fortified position the German army fell back to in 1917.  They had the luxury of doing this as they only had to give ground that they had taken from their enemy in the first place.  The Allies had no option of voluntarily retiring to better prepared works.  Offensively, the idea of "Strosstruppen", or "Storm Troopers" was developed.  Their ranks filled with experienced and motivated men, these troops would be used to hit the enemy quickly along weak portions of the line, thus pushing into his reserve and rear areas, disrupting command and communication.  Areas of stronger resistance were bypassed and handled by following "mopping up" units.  The ingenuity of these shock tactics added to the manpower gained from troops returned from the closed Eastern Front is what nearly split the Allied line in the spring of 1918.

The British first required the men they had expanded the army with be trained to the exacting standards of the regulars they were replacing.  This also required the officers above them to educate themselves to the level required of them.  Reorganisation of the Army, from the section level up helped to incorporate new weapons and tools, but also enabled the introduction of new tactics.  By far the most familiar of those would be the notion of "Bite and Hold." 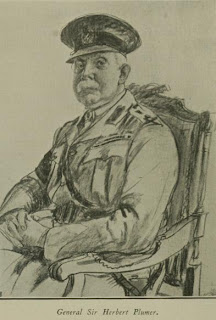 Before "Bite and Hold" became a tactical choice, objectives for attacks were usually the broad final goal of the offensive.  The new idea worked along the lines of setting specific, smaller objectives, delineated to smaller units.  Once these objectives were taken, the men holding them would be bypassed by following waves en route to their own goals further along.  The leapfrog nature of these tactics enabled the artillery to at least come close to keeping pace with the infantry, and allowed for fresh men to continually put pressure on the enemy, while having established points along the axis of advance to absorb counter attacks from.  General Plumer, commander of Second Amy, brought attention to the benefit of "Bite and Hold" with his successes during the Third Battle of Ypres in 1917.  It has been argued that Plumer's background in the infantry was an essential element to the implementation and development of these new ideas.

What this means for me is that when I myself am facing obstacles while also working with things and concepts which are new to me, I have two choices to make.  I can call the situation hopeless and retire from the field, or I can fall back, re-evaluate and adapt.  This is especially important if I wish to continue believing that we as individuals can learn from the trials of the past.  If I wish to honour those whom I admire, I should be thinking more about incorporating what their lives can teach me.

"If Ye Break Faith", therefore, will be returning to the regular posting schedule of Mondays and Thursdays beginning 3 October.  Keep posted on new developments by following on Facebook and Twitter.  Questions, comments and suggestion can be directed here.  If you wish to make a contribution to help this project meet its goals, donations can be made through PayPal.
Posted by Christopher J Harvie at 10:09