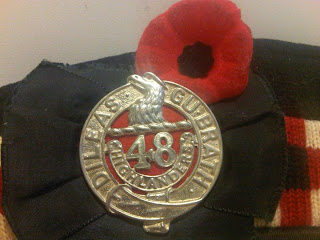 Our Remembrance Week Special Collection concludes today with the biography of Cpl H G Munro, written by Kathleen Minkowski.  I'd like to express a deep thanks to all who took time from their days this week to read these contributions. Keeping that in mind, I would like to appeal to you all to keep the memory of the loss of life in war with you beyond the moment of silence at 11 this morning.

The founding principles of "If Ye Break Faith" were based in the belief that the sacrifices made on our behalf by those who went to war is something that should be more present in mind throughout the year.  This is why we intend to initiate our first long running campaign "Give A Minute of Your Time" over the next twelve months to not only drive support for the causes of perpetuating history education, preserving physical history and supporting veterans, but keep the memory of sacrifice more present.  Only through understanding our past can we understand our present.

Today, I will be at the ceremony held at the war monument on Trafalgar Rd in Oakville, Ontario.  I certainly hope that many of you will take some time to remember in your own way.  On Monday, our regular posts return, as I hope you all will.  You can keep up to date with all the latest news and developments via Twitter and Facebook. 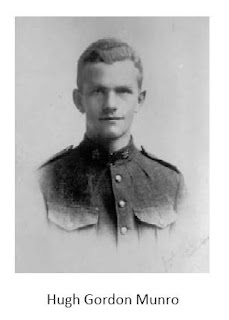 Not many of us can remain optimistic in our darkest hours. Not many of us are able to realize that our misery won’t last forever. Hugh Gordon Munro experienced war, death, and a lot more misery that any of us have every experienced in our lives. Despite all of this, Munro was able to remain optimistic throughout the war, no matter what happened. He would always dream of the future because he was so determined to tell his story. Munro made so many contributions to the war effort and they must be remembered…

Personal Information: Hugh Gordon Munro grew up with his loving parents Rev. J. E. and Jessie Munro and an enthusiastic brother, Arthur Melville, in the town of Gladstone, Manitoba. They were devoted members of the Presbyterian Church. Munro’s family later moved to Oakville, Ontario, and Munro’s father became the reverend at Knox Presbyterian Church. As a young unmarried man in Oakville, Munro took a job as a bank clerk.

On May 26, 1915, with having no previous military experience, Hugh Gordon Munro enlisted with the Canadian Over‐Seas Expeditionary Force in Niagara, Ontario. After a brief, but thorough examination, Munro was seen fit to be a part of the Canadian army. Munro was lean and above average height, described as 5 foot 10 inches and weighing 165 lbs. He had a fair complexion, grey eyes, and brown hair. Munro left his post as a bank clerk to represent his country overseas in World War I. 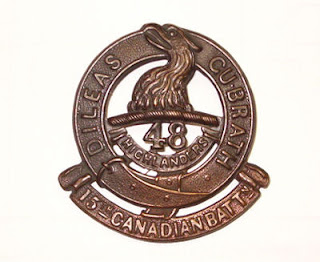 Military Movements: Hugh Gordon Munro was an Acting Corporal with the 37th Battalion. He was later taken on strength by the 15th Battalion of the Canadian Infantry (Central Ontario Regiment) in the 3rd Infantry Brigade and 1st Infantry Division. The 15th Battalion was organized at Valcartier, Quebec and was composed of recruits from the Toronto area. During the summer of 1915, Munro set sail with his battalion to Europe where their theatre of operation was in France. Some of the major battles Munro may have fought in are the Battle of Mont Sorrel and the Battle of the Somme.

The Final Days: During mid‐September, the 15th Battalion was resting and training in Vadencourt, France at a camp. Then, the battalion left Vadencourt for Brickfields but rain slowed them down and many of the soldier’s uniforms got wet. Training was limited due to the constant rainy weather. However, when the weather looked promising, practice attacks were carried out and gunners were trained.
On September 24, 1916, the 15th Battalion marched to the trenches in Albert, France to relieve the 14th Battalion. On September 26, 1916 the Canadian and British troops attacked and the Battle for Thiepval Ridge began. It was a very successful invasion for the 15th Battalion as hardly any lives were lost and they strategically avoided enemy shelling.

In early October, 1916, the 15th Battalion was in Warloy, France sleeping in billets and training with guns and bombs. The days went by slowly. Companies and Units held inspections and gas helmet inspections. Rain delayed the battalion’s plans so tasks were carried out in the soldier’s billets. The days would go by with normal enemy artillery activity, but here and there some 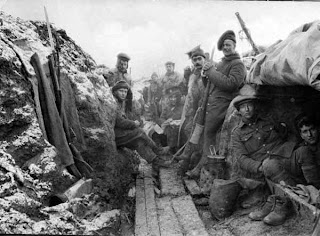 shelling would occur and the enemy would attack. The Canadian and British troops tried to advance further near Courcelette, France but the enemy attacked and regained some trenches.

Medical Records: Three vaccination marks were found on Hugh Gordon Munro’s arms when he was examined before he enlisted with the army. He was also inoculated on May 29, 1915, by a Dr. Thompson, just after he enlisted. Munro also spent 11 days in the hospital in 1916. He was admitted on August 7, 1916. In his unit base report, it states that rejoined his unit on August 18, 1916.

Lest We Forget: Hugh Gordon Munro died in No. 49 Casualty Clearing Station on October 9, 1916 from gunshot wounds to the arms and legs while fighting on the front lines when the enemy attacked with shelling and gunfire. He received three medals to honour his actions: the 15th Battalion Star, the British War Medal, and the Victory Medal. He had received $15 monthly while being a Corporal during the war. He was 19 years of age at the time of his death. Munro is buried at Contay British Cemetery in Somme, France. The cemetery was designed by Sir Reginald Bloomfield in August 1916 and was used for burials by the 49th and 9th Casualty Clearing Station. It was not until after the Germans withdrawal from the Hindenburg Line in the spring of 1917, when the Germans advanced on Albert, that the 38th and other Divisions used the cemetery. Today, the Contay British Cemetery holds 1,133 First World War soldiers. 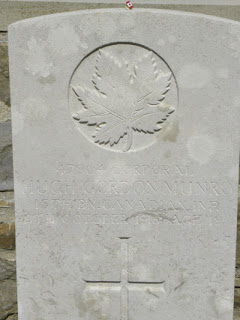 Conclusion: In his letters home to Oakville, Hugh Gordon Munro was always optimistic. He would write about what tomorrow would bring, and he always hoped that he would eventually be able to go home. Munro demonstrated determination, courage, and strength. Despite the cruelties of war, Munro was able to remain fearless, confident, and brave. He can be a role model for so many people; he showed us that we should cherish the little things in life and to always remain positive.

On behalf of "If Ye Break Faith", I would like to dedicate our Remembrance Week Special Collection to all my fallen comrades; in particular Cpl. Ainsworth Dyer and Major P D Hess von Kruedener.  Dileas Gu Brath.