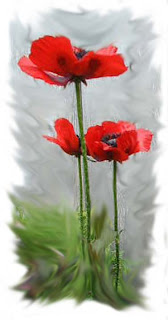 Our Remembrance Week Special Collection continues today with the biography of Captain D R Mackay, written by Stephen Im.  Again, the response we've had is wonderful, and we are enjoying bringing you these stories, and hope that they give cause for reflection on the human cost of war.

On Remembrance Day itself, most of us will observe the two minutes' silence to make those reflections.  We at "If Ye Break Faith" encourage this practice, and in keeping with that we announce today our first fund-raising program.  The logistics are a bit touch and go as NFP status hasn't come across any desks yet, but running from 11/11/11 to 11/11/12 will be our campaign; appealing to our audience worldwide to "Give a Minute of Your Time."  In our contemporary climate of financial unrest; money is tight all over.  Concerned with meeting the needs of the day to day, thoughts tend to be less towards extra expenditures.  The suggested level of donation to each person would be the equivalent of one minute's worth of earnings.  For the average Canadian, that works out to .40-.60 cents depending on what statistics one starts with.  Individually it is not much at all; but the underlying idea of this campaign and "If Ye Break Faith" itself is a collective effort.

Having a broad mandate of promoting history education, preserving physical history and supporting veterans past and present means that money gained from the "Give a Minute of Your Time" campaign, and other fund raising events upcoming will be spread amongst a network of associated charitable organisations.  This gives the prudent contributor the ability to stretch their donation across a wider scope.  While we'd like to encourage you to make donations along these lines, we'd prefer to have our business status confirmed before accepting any funds. (We won't stop you, though, so if you really can't wait, go ahead.)

In other news, "If Ye Break Faith" has been nominated for the Cliopatria Award for Best New Blog.  If you like, head on over to History News Network to cast a vote.  We're still seeking reader contributions of their own Remembrance Day stories.  Submission deadline is Friday, so if you haven't yet, please post your story to ifyebreakfaith@gmail.com.  As always, keep up to date with news and developments via Twitter and Facebook.

Ancestry.ca has announced a limited promotion for free access to military records.  The promotion ends on the 13th, so take advantage of this offer soonest!  The Ottawa Citizen has just announced the creation of a new Twitter feed, We Are The Dead, which is set to automatically tweet the names of Canada's fallen, at the rate of one an hour.  It's estimated that the 'bot will need to work continuously for thirteen years to complete its task. 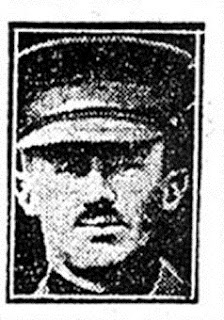 It was December of 1914, and Donald Roy MacKay was enlisting at the Toronto office. He was an 8 year veteran of the militia and felt that it was his duty to go to war. But little did he know what was about to happen.

Personal Information: Donald Roy Mackay was born on June 30th, 1883, in the city of Oakville, Ontario. He was the first son of John and Elizabeth Mackay and the eldest sibling of three younger brothers and one sister. When he enlisted he was 31 and married to Evelyn Marjorie MacKay. He and his family were strong believers in the Presbyterian faith. Before the war started, he had been a member of the active militia for eight years. Mackay enlisted at the recruitment office in Toronto on Dec. 3rd, 1914. His medical exam did not note any previous diseases or current ones and he had no obvious disabilities or impediments. He was in peak physical condition; he was 5 ft. 10 inches and weighted 155 lbs. He had a fair complexion with brown eyes and brown hair. His original trade, or calling, was as a farmer.

Military Movement: Donald MacKay was part of the 4th Canadian Mounted Rifles, 8th Brigade, 3rd Division, Canadian Expeditionary Force. Although MacKay had enlisted on December of 1914, he did not arrive at France until October 24th of 1915. Even before he arrived in Europe, in July, he was promoted from the rank of Lieutenant to Captain. 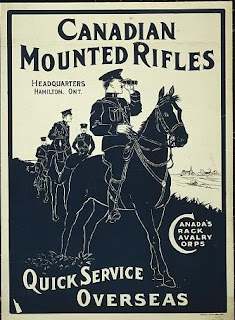 On November 4th of 1914, soldiers were taken from the Governor General's Body Guard, the 2nd Dragoons, the 9th Mississauga Horse and the 25th Brant Dragoons to form the 4th Canadian Mounted Rifles. They originally trained in Toronto, however they were soon asked to give up their horses to be used as chargers by the officers of the 2nd Canadian Division which was heading overseas to Europe. However, the regiment accepted an invitation to volunteer as a dismounted infantry unit. They were moved to Niagara‐on‐the‐Lake and later on to Valcartier to continue their training. In July of 1915, they departed to continue further training in England. In October they sailed to France to receive final training in trench warfare and to enter the war. They received their first casualties on Dec. 1st. Their second wave of casualties happened two days later when a raiding party got spotted and received fire on the 3rd of December. Captain MacKay was part of the second group of casualties of three dead and four wounded.

The Final Days: MacKay did not see much action before he was killed. The 4th C.M.R had been sent to Belgium and had trained and moved around a short time there. They finally settled down in the Aldershot Huts near the small town of Neuve‐Eglise, Belgium. Captain MacKay, another officer, and ten soldiers were part of a raiding party when a nearby artillery explosion killed him and two others. 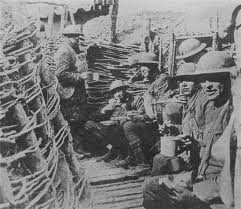 Medical Records: Donald Roy Mackay was a healthy man both at the time of enlistment. Artillery fire was the cause of his death when a shell exploded nearby and fragments pierced his body.

Lest We Forget: His father, J.A Mackay, who was his closest of kin, was informed of his death by cable. His total earnings while in the war were $954.55. His wife, Evelyn MacKay, received a monthly allowance from the government. MacKay received the Plaque and Scroll for his war efforts. He also received the 14‐15 Star, the Victory Medal, and the British War Medal. At the time of his death he was 32. He was buried in Belgium, and now rests in the Berks Cemetery Extension. 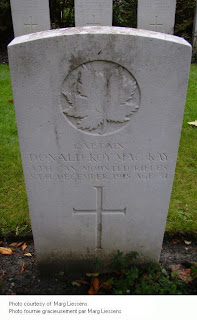 Reflective Response: Donald Mackay was one of the thousands of people who helped preserve our freedom. It is extremely interesting to know that he went to OTHS (known as Oakville High School). He was a committed soldier who was caught in the line of fire and sadly never returned home to friends and family in Oakville.

“All we have of freedom, all we use or know – our fathers bought for us long and long ago.” – Rudyard Kipling

Written By: Stephen Im
Posted by Christopher J Harvie at 04:48