Our Remembrance Week Special Collection continues today with a biography of Lance Corporal H M Gorman, written by Sabrina Shrestha.  So far, these posts have received a great amount of attention, and it's very pleasing that so many of you are reading, and hopefully enjoying these stories.

Submissions are still being accepted for our post concluding Remembrance Week on Sunday 13 November.  If you have a story about a veteran in your life you'd like to share, please post it to ifyebreakfaith@gmail.com before Friday, 11 November for inclusion.

If you haven't yet, please check out History News Network to place your vote for "If Ye Break Faith" in the "Best New Blog" category.  You can always keep up to date with all the latest news and announcements through Twitter and Facebook.

Personal Information: Howard Mahoney Gorman was born on April 21, 1894, in the town of Simcoe, Ontario, 45 kilometers southwest of Brantford, Ontario. He was brought up in a family of Methodist by his father, Robert J. Gorman and his mother, Estelle Gorman. Later, Howard and his family moved to Oakville, Ontario.
He was an unmarried 21 year old farmer who enlisted on June 19, 1915 in Niagara to go to war with the Canadian Over‐seas Expeditionary Force. After the medical check up, he was considered fit and was of good health to fight. 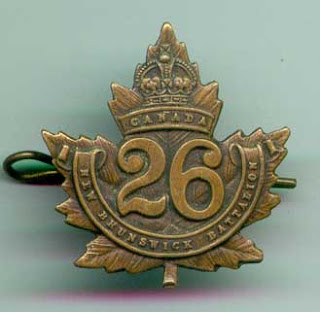 Military Movements: Howard was a member of the Canadian Army Service Corps (CASC). The CASC departed for England in May 1915 and went to a military training camp in Shorncliffe, England, on the coast of Kent.
On September 9, 1915, Howard was struck off strength and transferred to the 2nd Division by train; he embarked for France on September 14, 1915. The Canadian Corps was formed on September 15, 1915, at the Ypres Salient in Belgium, when the 1st Division was joined by the 2nd. Howard was struck off strength again on April 25, 1916, and was transferred to the 26th Battalion of the New Brunswick Canadian Infantry in the 2nd Division. On June 26, 1916, Howard was taken on strength by the Canadian Casualty Assembly Center (CCAC). On August 9, 1916, he was struck off strength from the CCAC to the 40th Battalion of Nova Scotia in the 2nd Infantry Division of the Canadian Expeditionary Force (CEF).(These movements are indicative of a wounded man moving back through lines.  Examining the War Diary of the 26th Bn reveals that they were subject to intermittent and heavy enemy bombardment throughout the17-18 June 1916.  This reconciles with Gorman’s movements at the time. CJH Ed.) On September 21, 1916, he transferred to the 26th Battalion, taking the place of a man whose health condition was failing. Howard remained with the Canadian Corps in the 26th Battalion until his death.
Howard was promoted to Lance Corporal on November 6, 1917. Unfortunately, he was killed in action on the same day, during the Second Battle of Passchendaele. 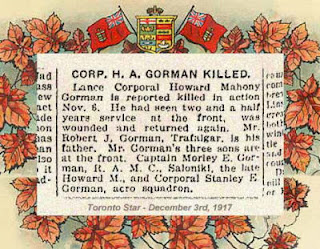 The 1st assault was done by the 2nd Anzac Corps on October 12; due to terrible weather, further attacks were delayed. The Canadian Corps presented a plan to capture Passchendaele on October 23, 1917. Moving through the Zonnebeve Road (southwest of Passchendaele), Gravenstafel, and Mosselmarkt (northwest of Passchendaele) were the only ways for the soldiers to advance towards Passchendaele. As the weather improved, the Germans shelled/bombed during the night injuring many Canadians; the Germans also used Yellow Cross gas (mustard gas) and Blue Cross Gas (sneezing gas) to weaken the enemy’s army.
As the 1st and the 2nd Division were held in army reserve, the 3rd and the 4th Division, at 5:30 a.m. on October 26th did the attack of the first stage. By the 27th, about 300 yards were gained and on October 28th, the first stage ended with heavy casualties on both sides.
At the beginning of November, the 1st and 2nd Divisions moved from an area east of Cassel to take over the exhausted 3rd and 4th Division. They arrived at the ruined station of Ypres after a tiring three‐hour train ride. On the night of November 5th and 6th, they prepared to fight in their positions and were ready to attack by 4:00 a.m. During the third stage, the mission for the 26th Battalion (5th Brigade) was to attack Passchendaele from the south, while the 1st and 2nd Battalions advanced to Meetcheele‐Mosselmarkt road and the 3rd Battalion were on the left of the 26th Battalion. The 2nd Division was in pillboxes attacking from the north of Passchendaele.

(An appendix to the 26th Battalion War Diary for November 1917 includes an after-action report for the attack on 06 November.   Despite the Battalion receiving 200 casualties, objectives were reached and held; with individual Companies linking up in good order with flanking units.  The report is quite comprehensive, and available through Library and Archives Canada. I think it's worth a read: Page 1 Page 2 Page 3 CJH Ed.) On November 6, at 6:00 a.m., a barrage exploded and the battle began. There were low flying aircraft but due to visibility, it did not go well. On all of the sides, the plan went like expected. Unfortunately, there were heavy loss again; 464 Germans captured, 2,238 casualties and 734 men died on that day and one of them was Howard Gorman.

Medical Records: On June 20, 1916, Howard was admitted to the Red Cross Hospital in Pembury because he was wounded on his left arm by a shrapnel shell. On July 12, 1916, Howard was admitted to Mill Convalescent Hospital, Woodcote Park, Epsom for the shrapnel wound on his left arm. He was again admitted to Mill Convalescent Hospital, Woodcote Park, Epsom on August 8, 1916, because he had a left arm discharge due to the Shrapnel wound from June. Howard was killed in action on November 6, 1917, and his body was never found. There are no records of how or what he actually died from.

Least We Forget: LCpl Gorman wrote his will on October 21, 1915; he left $15 to one of the soldier friends and the rest of his money to his mother, Mrs. Estelle Gorman. Mrs. Gorman received the Memorial Cross and Mr. Gorman received the Military Plaque and Scroll Memorial identified by his serial number 778782. During the time of his service, he earned $550 in total earnings from the CEF (Canadian Expeditionary Force) from November 1, 1915, to January 9, 1918. From November 1, 1915, to April 30, 1916, he was paid $25/month and from May, he was paid $20/month. After two years of service, he died at the age of 23. 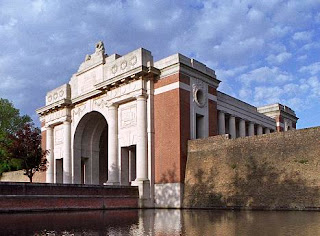 Howard Mahoney Gorman is one of the soldiers listed on the Menin Gate (Ypres) Memorial in Belgium during the defense of Ypres Salient in World War I. This memorial is in the eastern side in the province of West Flanders, which has the names of over 54, 000 officers and men who died without a trace. Sir Reginald Blomfield designed this memorial, which was created by the War Grave Commission. Inside the memorial, there are names of the soldiers on the panels inscribed by regiment and corps. These soldiers are still remembered today. Every evening at 8:00 p.m., the traffic is stopped at the Menin Gate.

“Never, never, never believe any war will be smooth and easy, or that anyone who embarks on the strange voyage can measure the tides and hurricanes he will encounter. The statesman who yields to war fever must realize that once the signal is given, he is no longer the master of policy but the slave of unforeseeable and uncontrollable events.”
‐Sir Winston Churchill
Written by: Sabrina Shrestha
Posted by Christopher J Harvie at 04:34