As Remembrance Week approaches, today's post will be the last regular update before our special daily content launches on Monday, 07 November.  We here are very excited to bring these biographies to you, and hope you've been looking forward to reading them.

October closed out with a bang.  It was a very successful month with increased traffic to the site, a lot of great feedback and a whole slew of new followers.  It's always nice to be able to determine that one is on the right track.  Now all that remains in the immediacy for promotional social tools is to figure out Google+ and find people using it (Hello, Gord!)  Until "If Ye Break Faith" gains a presence with this supposed "Facebook killer" and beyond, this project can be found through Facebook and Twitter.

In other news, my friends at Warfare Magazine have just announced the launch of their new site.  It promises daily updates and interactive content while working towards being an all-encompassing online resource for military history enthusiasts of all types. 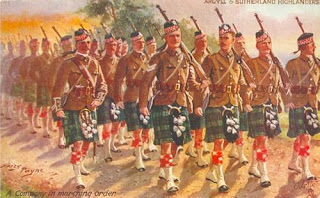 Today's title might not be as clever as some recent posts, but it was at one time the working title for a book.  I had planned to tell the story of my great-grandfather, John Harvie.  Suffering from a lack of originality in first names, this John Harvie is not meant to be confused with his son or grandson of the same name.  Fact is, if not for my mother's insistence to break with tradition, I'd be John Harvie IV; and while pretentious, I hardly think I'm pretentious enough to pull off Roman numerals.

The problem with the book idea is that John left so little behind for the telling of his own story.  He passed in 1939 and anything he shared of his experiences was lost when his son passed away suddenly almost thirty years later.  All that I know about him is a few pieces of information my father related to me.  There are huge gaps in the story, ones which might remain so.  Finding his service records might help flesh out some details, but about 60% of pre World War II records for British service personnel were lost, damaged or destroyed during the Blitz.  Inquiries to the archives and the Headquarters of the Argyll and and Sutherland Highlanders have turned up no result.

This is what I know:  Just before the turn of the last century, John volunteered at Sterling Castle for the 1st Battalion, Argyll and Sutherland Highlanders and saw service in the South African War.  I don't know whether he discharged after returning home, or kept with the army as a career.  Regardless, he was serving by the outbreak of the First World War, and was present at the Battle of Mons.  John survived the war, serving for its duration, although his younger brother did not.  Alexander was Killed in Action on 29 September 1918.  My father, who's sense of humour was always a wee bit odd told me that Alexander had his watch in his breast pocket, a common luck charm against a bullet through the heart.  The bullet, according to my father, was deflected by Alexander's watch, but in such a way that it went up his nose and blew his brains out.  Dad was not often meant to be taken seriously.

At some point during the war, my great-grandfather was awarded the Military Medal.  Exactly when and under which circumstances I may never know.  Complicating this is the fact that near the end of the war, there was a period of time in which the MM was given out on a quota basis.  Which means that the recipient may not have done anything noteworthy to obtain it.  Since 1916 to it's discontinuation in 1993, the Military Medal was awarded more than 135 000 times.  Finding John's citation; if the record still exists would take a lot of time.

It is from this small capsule of information that gave me inspiration to choose the army as my branch of service as opposed to the navy with which there was a stronger and more recent generational link.  After that, joining a Highland Regiment was a forgone conclusion for me. 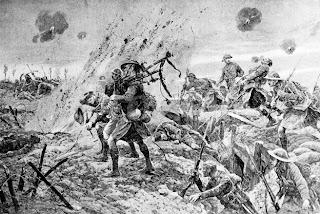 The difficulty in being able to tell his story is a great and very personal example of why "If Ye Break Faith" exists.  When nothing of the past is left behind, not only do we lose any lessons we might learn from it; those that lived through it become less human.  Just possessing a detail like what it sounded like when he laughed would move memory of the past into the third dimension:  Depth.

In the case of knowing my own great-grandfather more completely, there is very little that could provide any more of a picture than what I've got already.  The further time moves forward, the more of our past we stand to lose.  Remembering is a fine thing indeed, but I feel we need to concentrate on preserving those memories, even to the point of  the details of the life of a common man from Glasgow who went for a soldier.
Posted by Christopher J Harvie at 04:25