It's Not a Straight Line

Well, it's been a busy week.  Traffic to this site is down significantly since Remembrance Week, but on average higher than before, so the net gain is ours.  Much of the time over the past week has been dedicated to projects and meetings to help spread the ideals that this project is setting itself up to support.  To that end, there is some great progress to report.

For most of the rest of my day today, I'm putting the final touches on a detailed proposal for Iron Spirits, a process that I will touch on in more detail during the essay below.  A proposal, mind, is not an acceptance to publication, but a very important step along the way; I'm very pleased by the opportunity.  I held a meeting with a local politician on Friday, a man who enjoys my work and sees some value in my writing.  The opportunities to network with his business colleagues will certainly not harm any prospect of freelance work they might have, while being able to promote "If Ye Break Faith" to people who may be able to aid in corporate sponsorship.  It's very win-win at the moment.  I also have an article prospectively submitted to The Laurier Centre, but haven't had word on its publication yet, I shall keep you informed as that develops.  While we're on the topic, if any of you out there would like me to guest blog or submit a piece I'd be open for that, as well as the idea of doing so with this space in exchange.

The big news is that "If Ye Break Faith" has re-launched a crowd funding campaign on IndieGoGo.  The first time we went live with a campaign was really premature; the project hadn't the direction and scope that it does now.  The funds raised by this campaign will go towards the start-up and maintenance of the business as well as providing the initial funding for two bursaries "If Ye Break Faith" will be awarding annually.  These awards will be both at the undergraduate and graduate level for students of history.  Qualification for the bursary will be contingent on GPA as well as an essay competition.

Hand in hand with the IndieGoGo campaign is "If Ye Break Faith's" first ever promotional video.  It was hammered together using Power Point and good intentions, but I admit it's pretty bloody awful.  Don't watch it, even though it fairly well explains what it is we intend to do.  As usual, spread the word through Twitter and Facebook.

Have a suggestion, question or submission?  They can all be sent through to ifyebreakfaith@gmail.com.

In putting together my sample chapter for the submission of "Iron Spirits", I found myself for the first time having to describe the notion of a "salient."  Admittedly when I was younger, the word was so often paired with Ypres that I took it to be descriptive of a natural geographic feature alone.  The difficulty isn't in defining the military context of a salient, but doing so in a way that balances ease of understanding without being insulting to intelligence.  Since it is my goal to make military history more accessible, I'd best learn how to write in such a way that the concepts required to be understood which may not be familiar to the average person can be expressed in an engaging way.

The reasons why salients become important here is tied into that primary question, the inspiration to curiosity and understanding and the foundation of historical study: Why?

By the spring of 1915, the war had been deadlocked on the Western Front since before the previous winter.  The catch phrase used by almost every historian I've consulted, and is so ubiquitous I've used it myself is "a line of trenches stretching from the North Sea to the Swiss Border."  Of course, we know that it's a bit more complicated than that, and I think I disabused certain notions (like the one continuous line running North-South) in my two piece work In The Trenches I & II.

Take a look at the map above.  The red line (representing the Germans) curves around the blue line in a gentle arc.  We are looking at the Ypres Salient circa April of 1915.  Formed by necessity of terrain, or by a successful advance on a narrow front, salients both large and small developed all along the Western Front as the war of movement stalled out and trench warfare took over.  What I hadn't thought much about, until I began doing background work on the little known Battle of Festubert in May of 1915, was the existence of salients and their tactical difficulties for forces on either side. The existence of little bulges along the line dictated much of the offensive work by both sides during 1915, which for the Western Front would be a year of adjustment and building strength prior to the grand campaigns the following year.  One very crucial part of that would be to eliminate salients as much as possible.  For the blue people above, they are constantly watched over and can be fired upon from three directions, the red people, while they have that advantage, are really quite a ways away from their friends to the left and right of the curve, making mutual support difficult.  Any advance made from them would have to take a fair amount of enemy ground before even reaching the start line for flanking units.  For either side there are advantages, but ideally in a static position, you desire to have as straight a line as possible.

Which is why (partially) the British decided to fight at Festubert.  Ostensibly it was to reduce a salient in the area, but that in itself was a trade off for failing to take the high feature of Aubers Ridge.  Like most offensives in the second year of the war, small gains were being made at the cost of unforeseen numbers of casualties.  From this and from a fundamental misunderstanding of tactical necessity comes the long held notion of "slaughter for no gain."  Without meaning to be too glib, there is some truth to that as '15 was a real learning year from top to bottom, an analogy of eggs and omelettes would be apt.  Though the real issue is that both the Allies and the Central Powers were not in a position, materially or in manpower to achieve victory.  The public impression is that the army should have been working towards a decisive end, but was proving incapable at doing so.  Reality was that the small gains that were being made were necessary to shore up the line, straighten it out and afford the best possible jump-off point for the upcoming grand offensive.

As a side note, the work done by the British in 1915 to gain position having been done in Flanders was motivation for Haig to plan for the 1916 offensive there.  It was pressure from his French allies that dictated he attack along the Somme. 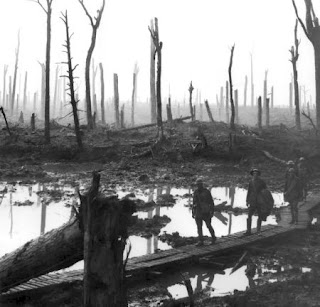 "The desire to cause a large breakthrough was present, but 1915 could not be the year for it.  Opportunities based on political flights of fancy would keep a great deal of British and French assets pinned down in other theatres.  Kitchener's Armies, the erstwhile civilian volunteers for the war were at the front, with numbers steadily increasing as the year unfolded.  They would not be either numerous or experienced enough for a large scale offensive until midway through the following year at the earliest.  Small offensives for limited objectives would achieve three goals: Put allied forces in the best possible starting position for the anticipated offensive in 1916; units new to the front would have opportunity to learn while doing, and hopefully keeping pressure along the line at different points would help "fix" the Germans to their present locations."

Posted by Christopher J Harvie at 03:17