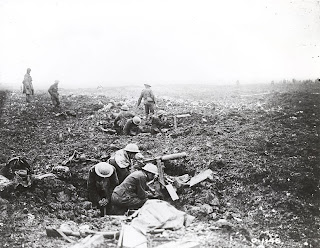 It's the taking of Vimy Ridge that I'm going to discuss today.  Years ago I wrote a highly marked essay about the battle and how it was related to Canadian identity.  I'd really rather like the existential opportunity to debate with my younger self some of the points of that work.  When I began to read more in depth about the war on the whole, works by Liddel-Hart and Keegan, I would become very upset at how little attention was paid to the Canadian effort at Vimy.  Didn't these historians know how important that victory was?  Was their British bias that obvious to not include in their work an appropriate regard to something the Colonials accomplished that they could not?  There had been two French attempts in 1915, May and September, to seize the heights from the Germans which had not met with any success and resulted in a total estimate of 150 000 casualties.  A British attempt the next year was taken as part of a counter-attack against German offensives in the area.  Limited successes gained British control of the ridge but these gains were not able to be held against a later German assault.


I think I had rather worry about my own biases before pointing fingers.  Let me say this:  Vimy Ridge was an important victory for Canadians, but taken in a larger context it was a moderate gain in a diversionary attack in support of larger operations further south.  The Canadian Corps' objective was set in March 1917 to be their contribution to what became known as the Battle of Arras.  The offensive there would be what is now known as a "containment operation."  The British goal was to keep German forces in the area engaged so as they could not be brought to support against French operations further down the line seeking that ever elusive breakthrough.


I've often heard the success of the battle being attributed to newly developed (often cited as Canadian developed) tactics.  This is not entirely true.  The victory was won through the marrying of some new ideas with established military doctrine and was completely directed by the British.  The established doctrine of assaulting fortified defences, by first digging forward running trenches and tunnels called "saps" to jump off from and using the leapfrogging method of fire and movement ( where one element uses covering fire to keep the enemy pinned while the other moves forward in turn) were elements the British had employed in previous conflicts.  They seemed new because they were new to the volunteer armies raised for the war, and not put into use until later in the war as this kind of work requires many months of practice and training.  The Canadian Corps received this training between November 1916 and March 1917 in preparation for the attack.  Section organisation, meaning the distribution of specialised weapons and the idea of moving after limited objectives in a style known as "Bite and Hold" were newer developments, but not Canadian in origin.  They came down the pipe from General Headquarters, the British commanding element on the Western Front, and were adopted by all forces under that command.


It was due to the integration of old and new, along with the time allowed to perfect it (training in large groups when away from the front lines was often superseded by using the infantry as brute labour when in reserve, a detriment to professional growth) that gave the Canadian Corps a particular edge in comparison to other Corps under British command, lending credence to the idea of being an elite unit, and the success of operations of which the first was Vimy. 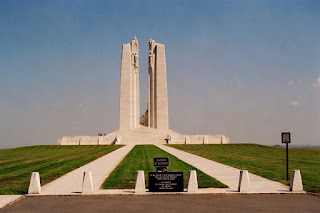 The victory at Vimy was a great accomplishment, removing the enemy from a high ground feature overlooking allied lines, but must be measured in the perspective of the bigger picture of which Canada was a small participant in a grander operation.  It reflects still on Canadian identity as this was the first large operation in which the Corps had undergone as a complete unit of four Divisions, from all across Canada, and historically the first quantifiable military success our country has had on the world stage.  I don't think, though that a military success, no mater what the scale or scope does much to give a complete idea of national identity, as we as a country are so much more than what can be valued by a test of arms.
Posted by Christopher J Harvie at 04:56