Goodness, what a week I've had so far.  Opportunities regarding this project and my own freelance work have been coming to me in a "when it rains it pours" kind of way.  First, I'm very thrilled to have been mentioned by The Life Today, a daily posting of notable blogs.  I've just made my first step toward publication.  Recently, I've become acquainted with History In An Hour, a great way of making the past more accessible,a goal which I support wholeheartedly.  Also, the latest edition of Warfare Magazine is now available.  Take some time to check the new issue out.  It's been one of those weeks where I seem to be accumulating followers on my Twitter Feed.  As has been my practice, I like to thank each new follower directly, but there's been so many I may have missed one or two.  I apologise if you've been overlooked, and please accept my thanks here.  This project can also be found on Facebook, a great way to keep informed on new posts and developments. 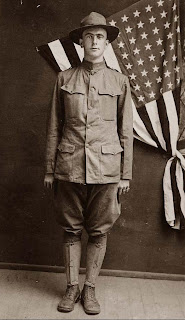 I like the ability this site gives me to track my audience.  The information available through my blog's statistics can help me to decide on what topics might be well received.  As last week has seen a rise in hits from the United States, I figured it would be a good opportunity to discuss America's involvement in the First World War.  The U.S.'s entry in the war is often seen as a calculated effort to position the country favourably in the peace process; that her contribution came at a time when victory was a foregone conclusion, and so of not much importance to the Allied effort on the whole. Once again, we're faced with an aspect of history in which our perceptions have an element of truth, but overlook the intricacies of the period and personalities examined.

By 1914, America was emerging as an economic and industrial powerhouse, whose output and GDP had just begun to surpass previous leading countries such as the U.K. and Germany.  A political swing and social trend towards isolationism, supported by President Woodrow Wilson's platform of international neutrality kept the States from immediate involvement.  The decision was good for business, as the free-enterprise system which America's economic philosophy is based allowed industrialists to "play both sides" in taking advantage of increased trade possibilities to both the Entente and the Central Powers.  In a sideways fashion, America also provided manpower to the war effort in the form of 35 000 volunteers who crossed the border to join the Canadian Expeditionary Force.  One of the most famous aspects of American involvement before 1917 was the "Escadrille Lafayette", a squadron of American volunteer pilots flying French aircraft under the command of the French Air Service.  These issues were just as diplomatically difficult as the issue of Germany's policy of unrestricted submarine warfare.

The aim was to strangle Britain by interdicting trade ships bound for the island nation, and to that end Germany instituted the practice that any ship, even of neutral origin travelling in contested waters could be sunk without warning.  The loss of the Lusitania in 1915 would later become a rallying cry to carry the country's population to the war.  At the time, though Wilson determined to broker a diplomatic solution, which resulted in Germany suspending the practice.  It would be re-instituted in 1917 when the Germans were desperate to force a strategic conclusion to the war by eliminating Britain's material ability to continue.  The loss of American lives inflamed the population, the loss of hundreds of thousands of tonnes of material would not be tolerated by big business.  The U.S. again protested this action along with a secret telegram between Germany and Mexico describing terms of alliance should Mexico attack the U.S. to prevent her from entering the European conflict.  Despite Wilson's long standing desire to not make war, (his desire for peace had been so great that his government had offered to mediate a negotiated settlement to the war) the affronts to his people and their livelihood could no longer go unanswered.  The United States Declared war on Germany on 2nd April, 1917. 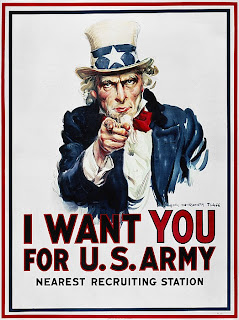 America greeted the war with an enthusiasm which rivalled European public response in 1914.  It was faced with having to raise, train equip and transport it's army from the ground up, a process which would take some time.  Even after the first elements of the American Expeditionary Force arrived in France, its commander, General Pershing wouldn't deploy his forces to the field until he had an appropriate host that would operate as an equal and independent  force.  The delay was the impetus for Germany's spring offensives in 1918, a hope to break the Allied lines before the fresh influx of men and materiel from the States could be brought to the fight. It was a near run thing, but it was due in part to the AEF bolstering front line forces which defeated the German advance.  America would go on to distinguish itself in battles with names that resonate on their national conciousness, such as Bellau Wood and the Battle of the Marne.  Eventually disposed of more than a million men, the AEF was too strong a reinforcement for Germany to counter, and could be extrapolated that it was a deciding factor in Germany's request for armistice.

The First World War, as concerning America seems not to have the same historical resonance as the Second, perhaps to do with the failed peace and the ambiguity of the conflict in the first place.  However, her decision to go to war with Germany in 1917 is almost assuredly what would bring the principle member of the Central Powers to heel. Yes, America really did "save the day" by going over there.
Posted by Christopher J Harvie at 05:52