A Fair Night Out


A special thanks goes out this week to Pam Calvert, a High School History teacher in Oakville who has made available to me some great work her Grade 10 students produced with regards to those of the Oakville area who were killed in the war.  In future it may be possible to bring you here in this column some of these wonderfully researched and award winning essays. 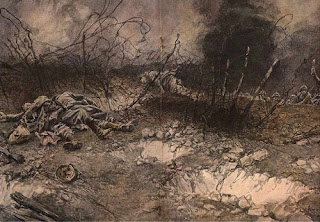 It's a moonless night, a handful of figures moves slowly and quietly along the broken ground between the firing trenches.  About an hour past last light they had moved from the safety of their own lines into no-man's land through gaps in the tangle of wire, intent on getting as close as possible to the enemy lines.  They wear no helmets and have darkened their faces with char and mud.  A Very light hisses and pops overhead, casting flickering shadows across the marred landscape.  The group halts, and moves with deliberate slowness to ground as the flare descends.  A nervous machine gunner, some yards down the line lets off a long burst.  It stops, though, the man probably chastised by an NCO for wasting ammunition.  When all is quiet, the little band moves off again, getting quite near to their objective.  Coming upon the enemy wire, a similar gap to the one they passed through is found.  This could be dangerous.  Moving through here would mean not having to take time cutting, and the chance of being discovered by the noise, but lanes like these are usually overwatched with machine gun teams.  The patrol commander decides to work with speed and surprise as his advantage.  It's a cool night, the weather has been damp for most of the week, and the line is generally quiet.  With luck the enemy won't be too vigilant tonight.  The Lewis gun team is left outside the wire to cover a quick retreat while the other four men, armed only with pistols, bayonets and improvised cudgels sprint at a crouch through the obstacle.  As rehearsed, once beyond they spread abreast, one each going left and right to cover the traverses, the other two dropping right into the firing bay.  The pair of enemy soldiers in the bay are taken completely unaware.  To his credit, the first one moves for his rifle and is about to shout the alarm when he is clubbed and knocked senseless.  The second man, much younger, puts his hands up quickly, his fear understanding the language of violence.  He is quickly patted down and roughly manhandled out of the trench.  The patrol regroups and heads back to their line, their prize in tow; all in all a fair night out.


As I alluded to in my post Life on the Line, patrolling became a crucial phase of operations for both sides during the war.  There has always been the need to know what opposition is being faced.  Crucial information such as enemy resources, deployments, location of heavy weapons and strong points must be gained in order to give advantage to a successful attack.  Taking prisoners by force, in what are known as "snatch patrols" are a valuable tool.  Not only does it inspire an element of fear in the enemy, so much can be learned directly from a captured soldier than could be observed at a distance.  This remains true whether he talks or not.  If he is hungry or well fed, in a fresh uniform or covered in filth, if he struggles or gives himself up readily can all tell volumes about his morale, his supply system and just who exactly might be across the way.


The second nature of patrolling, besides gathering of information was to keep men active and aggressive.  Working in the defensive can quickly become routine and the sharp edge necessary to the offensive must be kept honed somehow.  The ability to strike the enemy at will and on one's own terms inspires confidence in the troops while at the same time demoralising the enemy. Active patrolling taught men how to act independent of larger commands, a crucial skill to inspire initiative and a good way to educate NCO's and junior officers who may have to assume control of a battle when attrition rates leave them senior.  Becoming familiar with the ground had great benefits in planning offensives and would help to raise the men's confidence during attacks.  Pent up aggressive spirit can be expended, the enemy softened up and let known that they are not as safe as might be thought, as well as reducing that same fear among friendly forces. 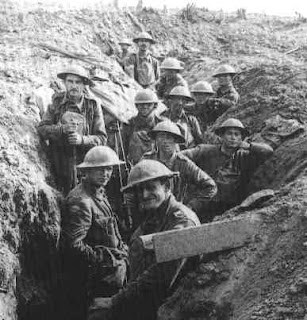 The Canadians seemed to gain the reputation of being aggressive and expert patrollers.  Our Forces carry this tradition on today by spending a lot of time in training in different types of patrols, from reconnaissance to ambush.  We always prefer to operate in weather and conditions that would work against the enemy, and are well practised at moving silently in darkness.  Some have suggested that our Great War reputation stems from the backwoods nature of the men that went overseas.  I'd debate that.  There were as fair a share of bank clerks and factory boys as there were lumberjacks and roughnecks.  Like many things related to war, this notoriety is not easily explained.  Moreover, this expands to how we as a nation are perceived.  Generally, Canadians are viewed as polite and peaceful, but our military experiences give us a reputation almost in duality of this.  I myself can't come to terms with a comprehension on why this is so, except that I believe that is is a grand thing to be recognised as a nation that will help, aid and promote well being throughout the world, but can still meet force with force when it chooses to.
Posted by Christopher J Harvie at 05:00