Life on the Line

Today, the Fourth of August marks the 97th anniversary of Britain's declaration of war on Germany for violation of Belgian neutrality, and by Imperial proxy, Canada's entry into what would shortly become known as the Great War.  It's also, as coincidence would have it, my birthday.  Just thought I would mention that, as I'm expecting cake.  Seriously, though, I have received some great gifts, most notably in the way in which my project has grown and raised awareness of the cause it supports.  This blog has just passed two thousand site hits, and I get an enormous sense of accomplishment from that as well as the positive encouragement many of you have sent to me.  I shall show my gratitude in continuing to write posts that will hopefully engage interest and inspire thought on Canada and the First World War.Keeping up with this site and the project it supports can be done by following our Facebook Page, and Twitter Feed.  Any suggestions, questions or comments, please forward them to me here: ifyebreakfaith@gmail.com.  I'm still open to topic ideas or perhaps if you would like to guest blog, post suggestions requests or questions here. 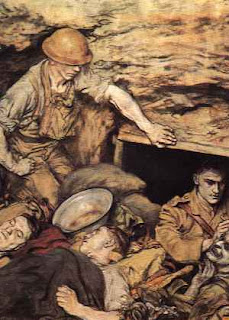 When the war began in earnest, not many believed that it would last very long.  The German plan to capitulate France was based on a six week timetable, and the other major belligerents estimated, perhaps arrogantly, that this conflict would conclude by Christmas 1914.  The most notable voice that decried these assertions was Field Marshal the Lord Kitchener, First Soldier of the Empire and at the outset of the war a popular (if not politically astute) choice for the office of Secretary of State for War.  He was firm that the war would last no less than three years and that Britain would need to field an army of 1 000 000 men.  Never mind that this in itself turned out to be a gross underestimate, at the time he made the prediction, his Parliamentary colleagues thought he was well off base.  As I illustrated in my posts In the Trenches and In the Trenches II the grinding down of the war from one of open manoeuvre to that of mutual entrenchment played a part in the length of duration of the war.  What was it really like; I've often found myself wondering, to live in such conditions?

First, we need to separate ourselves from images of trenches that we've been subject to in popular films and television (more about media misrepresentation of the war in a future post) even many contemporary photographs were staged and as such not truly representative of actual living conditions on the front line.  Trenches were rarely as neatly constructed or well maintained as we would like to think.  There was a standard doctrine on how to construct defensive positions, but often suitability of the land; time and material available and enemy interference dictated how entrenchments were laid out.  In fact, many parts of the Flanders area in Belgium where the Canadian Expeditionary Force spent much of the war is so low lying and has a high water table that many works there were developed by "digging up" rather than digging in.  As deep trenches would be likely to flood, walls of wood, sandbags or other material were built upon natural land features for the men's protection.  Quite aside from neatly engineered textbook positions, trenches very often were a Boschian experience; collapsed in parts from artillery, choked with muddy effluence and the prospect of disinterred remains were quite common.  The struggle was to attempt to maintain the trenches as best they could be, and hygiene was a primary concern, but often that was an impossible task.  Traffic in and out of the line was also tightly controlled, but could become muddled and jammed during times of crisis-bringing up quick reserves to press forward an attack or counter enemy incursion; falling back from overwhelming offensives (fairly common during the "Kaiser's Battles of spring 1918).

Despite a well developed system of rotating units in and out of the front line, so that troops would never be at the front for extended periods of time and allowed to rest, when at the front, men were exposed to the weather, enemy shells and mortars as well as snipers and raiding parties at any given time regardless of there being major offensive actions in the area or not.  Certain areas could be quiet for extended periods, while others experienced constant enemy attention.  Exhaustion was common and a bedlam of noise a constant distraction.  Routine and discipline helped to keep men focussed and attentive.  Each day would begin with

stand to every morning at first light....that every soldier was either on the fire step or ready to get onto it...weapon loaded and ready to fire....(After standing down) would be improving the trench, pushing saps out towards enemy lines, digging sleeping bays into the bottom of the trench wall or in the command trench, or sleeping to order....Much time was spent keeping weapons clean and serviceable, and there was an inspection by officers and NCO's of every man's rifle at least once each day, usually after breakfast

It is that part of routine which belies the Ross Rifle's malfunctioning due to dirty conditions as extolled in my post Made in Canada. 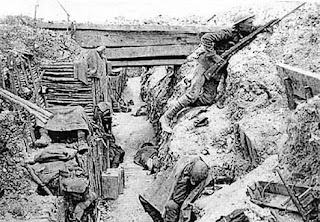 Ever present in all of this, through tedium of routine and daily attrition of four or five days in the firing line was the notion that at some point an advance would have to be made to root the enemy out of his works.  The idea of "live and let live" did exist from time to time along various points of the line, but that attitude could easily dull an army's required offensive spirit.  To counteract this, patrols would be mounted across no man's land, from groups as small as four men or so to extravagant raids of hundreds at a time.  Their purpose was to gather intelligence, capture prisoners, cut wire and reduce strong points, or to make a general nuisance to keep the opposition on edge.  Canadians seemed to flourish in this phase of operations, to the point that just prior to the attack on Vimy Ridge the Canadian Corps was ordered to stop patrolling altogether as the large parties were seen as being too aggressive and causing needless casualties.  This wasn't the case of over ambitious leaders sending men out without cause, as every man who went on patrol was a volunteer.

We can read in Will Bird or Donald Fraser's accounts as well as other good first person sources on what it was like to exist in a subterranean world, cluttered by detritus, a blank and burned landscape where death was a constant factor and disease close to hand.  We can never truly know, however, what a bleak land looked like to eyes seen in colour, the sounds of shells and scrape of spades, the smell that must have been beyond vile, the taste of tea tinged with petrol from being carried in interchangeable canisters, the feeling of damp feet and present dread that the next "one" might be yours.  It's a wonder, then, how men ( mind you from a time where everyday life was more a hardship than we can easily understand) endured these conditions.  But thank goodness they did.
Posted by Christopher J Harvie at 05:00