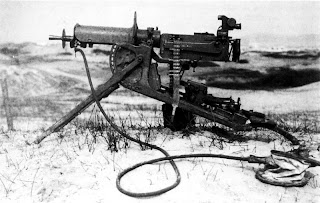 “If you wanted to make a lot of money, invent something that will enable these Europeans to cut each other’s throats with greater efficiency.”  This was the advice that the American inventor Hiram Maxim states he was given at the Paris Electrical Exhibition of 1881, just prior to the development of the recoil-operated automatic gun, or as it became known, the machine gun.  This was just one of many new, emergent or developed technological ideas that brought warfare and the world into the Twentieth Century.  With the political climate in Europe in the receding decades of the Nineteenth Century one of posturing and positioning, the situation was rife for military innovation and each major power sought the technological advantage that could give an edge to victory in the next war.  The complete history of human conflict has a long standing precedent of giving rise to new concepts, ideas and inventions.  The Great War was certainly no exception.  As it was begun at a time when the Industrial Revolution had really picked up steam (sorry, couldn’t resist) the events unfolding between 1914-1918 would change the world forever; some consequences negative but others quite positive.

This idea is what leads some historians, including myself, to adhere to a philosophy known as “The Late Twentieth Century.”  What this theory proposes is that the delineation between the 19th and 20th Centuries occurred not chronologically but rather because of the tremendous impact the cause and effect of the war, happened when the conflict was joined.  The deadlock which came about when the opposing armies met nearly equally matched in the autumn of 1914 was just the beginning of inspiration to figure out new ways to breach the line and re-institute open, manoeuvre warfare.  That the opening moves of the war happened as quickly as they did is directly tied to the armies’  reliance on well developed rail networks, some having been expressly built for the possibility of war, such as those required by the German’s “Schleiffen Plan.”

Advent of chemical warfare came as a direct by-product of industry.  Waste material from textile mills had been stockpiled with no practical use.  Despite the animosity that followed its primary offensive release, chlorine was the first effective method enacted as a call to overcome the defences that stalled the infantry on the advance.  An arms race of sorts ensued, with each side quickly developing first the defences against chemical attack, and more damaging gases to overcome the invented protections.  Bigger and more powerful combustion engines made heavy armed and armoured vehicles a possibility, giving birth to the tank and an entirely new branch of military operations, which would actually wait until the next war to come into its full maturity.  Developments in chemistry coupled with higher industrial output gave the competing powers greater numbers of more effective and longer ranged artillery shells and the guns with which to deliver such ordinance at a high rate of fire.  This changed the way in which battles were conducted and started the school of tactical thought known as the “Barrage Theory”, the genesis of the idea that battles and wars could be won by submission to superior firepower.  The development of flight, an entirely novel concept at the start of the war accelerated much quicker than perhaps would have occurred without it.  The advantage of having use of three dimensions to conduct operations spurred better engine designs and more stable airframes.  Ostensibly this was to enable planes to fly faster and higher and to carry more munitions.  The negative impact was that now distant civil targets could be reached, in an extension of the Barrage Theory, to demoralise one’s enemy and reduce the will and capacity to produce for war, again an idea that really took hold during World War II.  Conversely, the improvements in flight technology were responsible for the emergence of civil aviation at first with mail and eventually with passengers that made worldwide communication more quickly accessible.

Unforeseen numbers and types of casualties required those in the medical services to work towards making treatment a quicker process and noted the institution of triage, the assessment of the wounded in order to prioritize their care.  The science behind prosthetics and reconstructive surgery experienced groundbreaking advances.  Conditions being what they were on the front, doctors progressed ideas of sanitation and disease prevention that would benefit civil practice after the war.  One of the most notable successes in post war medicine was the discovery and synthesis of insulin led by Dr. Frederick Banting who gained his clinical experience as a surgeon with the Canadian Medical Corps. 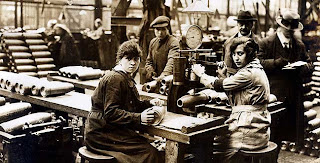 All of these innovations called industry to increase productivity and efficiency leading to improved output, better production methods and higher quality control.  These processes were translatable to industrial method in civil sectors and lent a great deal to the economic boom that occurred in the decade following the war.

While it is the purpose of this blog and the project it supports to investigate the human cost of war; a consideration of the loss on a personal level that occurs in armed conflict, it cannot be entirely separated from the advantages and developments which came to aid society as a result of the war.  For Canada, the benefits of a rapid advance in industry, technology and transportation clearly assisted in bringing a small, insular nation to one prepared to enter international affairs in business and politics in its own right.  This was a concerted effort that took into account not only our military contribution overseas but also those made in other public and private sectors at home.


Posted by Christopher J Harvie at 05:00